A 12-year-old boy is suspected of murdering a homeless man in the central Israel city of Holon, according to Hebrew media reports on Sunday.

Andrei Tiomkin was found dead in March after suffering a serious head injury. His body was uncovered in an abandoned building in Holon.

The police originally did not suspect Tiomkin’s death to be a homicide. However, an autopsy “painted a different picture,” reported Channel 12.

A subsequent police investigation indicated that a 12-year-old boy who arrived at the scene with his friends beat the man on the head with a sharp object, according to the network. 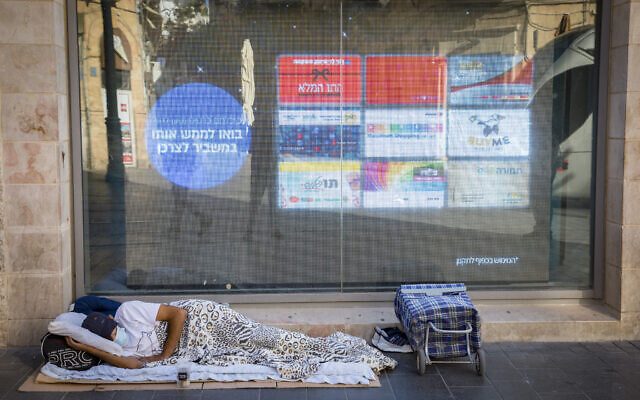 A homeless person sleeps in the street on Jaffa Street in downtown Jerusalem on September 23, 2020, during a nationwide lockdown. (Nati Shohat/Flash90)

The murder seemed to result from “boredom” or constitute some kind of prank. However, the boy’s exact motivation remained unclear.

The investigation found that regardless of motive, there was no initial provocation from Tiomkin.

At this stage, the extent of involvement in the murder by the boy’s friends is currently unknown.

The case is currently being discussed by the police and prosecution, who believe that an indictment will be filed soon. According to Channel 12, prosecutors will have to take the boy’s young age into account.

The child is not in police custody, according to the Kan public broadcaster.

The Association for Civil Rights in Israel has previously defined 25,000 people as homeless and alleged that social services are only helping around 10 percent of the total number of homeless people in the country.


I’m proud to work at The Times of Israel

I’ll tell you the truth: Life here in Israel isn’t always easy. But it’s full of beauty and meaning.

I’m proud to work at The Times of Israel alongside colleagues who pour their hearts into their work day in, day out, to capture the complexity of this extraordinary place.

I believe our reporting sets an important tone of honesty and decency that’s essential to understand what’s really happening in Israel. It takes a lot of time, commitment and hard work from our team to get this right.

Your support, through membership in The Times of Israel Community, enables us to continue our work. Would you join our Community today?


Join the Times of Israel Community

Already a member? Sign in to stop seeing this


You’re serious. We appreciate that!


We’re really pleased that you’ve read X Times of Israel articles in the past month.

That’s why we come to work every day – to provide discerning readers like you with must-read coverage of Israel and the Jewish world.

So now we have a request. Unlike other news outlets, we haven’t put up a paywall. But as the journalism we do is costly, we invite readers for whom The Times of Israel has become important to help support our work by joining The Times of Israel Community.

For as little as $6 a month you can help support our quality journalism while enjoying The Times of Israel AD-FREE, as well as accessing exclusive content available only to Times of Israel Community members.

Already a member? Sign in to stop seeing this

2021-04-04
Previous Post: Magpakailanman: Hardships of a homeless father | Full Episode
Next Post: Give food to poor hungry cats and kittens