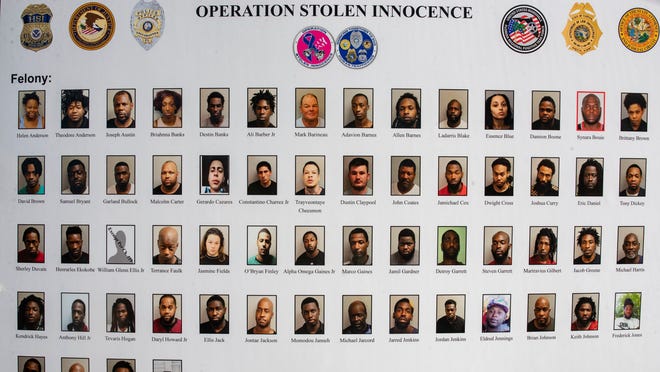 More than 170 people have been charged in a massive investigation by the Tallahassee Police Department and its state and federal partners into the sex trafficking of a young girl.

On Tuesday, TPD Chief Lawrence Revell and state and federal officials announced results of Operation Stolen Innocence, a two-year investigation into the sex trafficking of the girl, who was 13 and 14 years old when the offenses occurred.

“I know it’s hard to believe that something like this happens in our community,” said Lorena Vollrath-Bueno, felony chief for the State Attorney’s Office. “But it does.”

Revell, during a news conference outside Police Headquarters, said the operation was perhaps the largest of its kind in TPD history.

The investigation began in November 2018 after TPD investigators spotted images of a child posted on a website with sex-for-pay listings, he said.

The department’s Special Victims Unit set out to rescue the child, who cooperated in efforts to bring charges against the people who exploited her. Revell praised the police work that yielded the arrests.

“The arrests in this operation are the culmination of the diligent work from our dedicated investigators, who have worked tirelessly to bring justice to the victims in this case,” he said. “Two years of investigative work yielded the arrests that you are seeing here today.”

Check back with Tallahassee.com for more on this story.