‘A good problem to have’: Homeless pets in short supply at county shelters 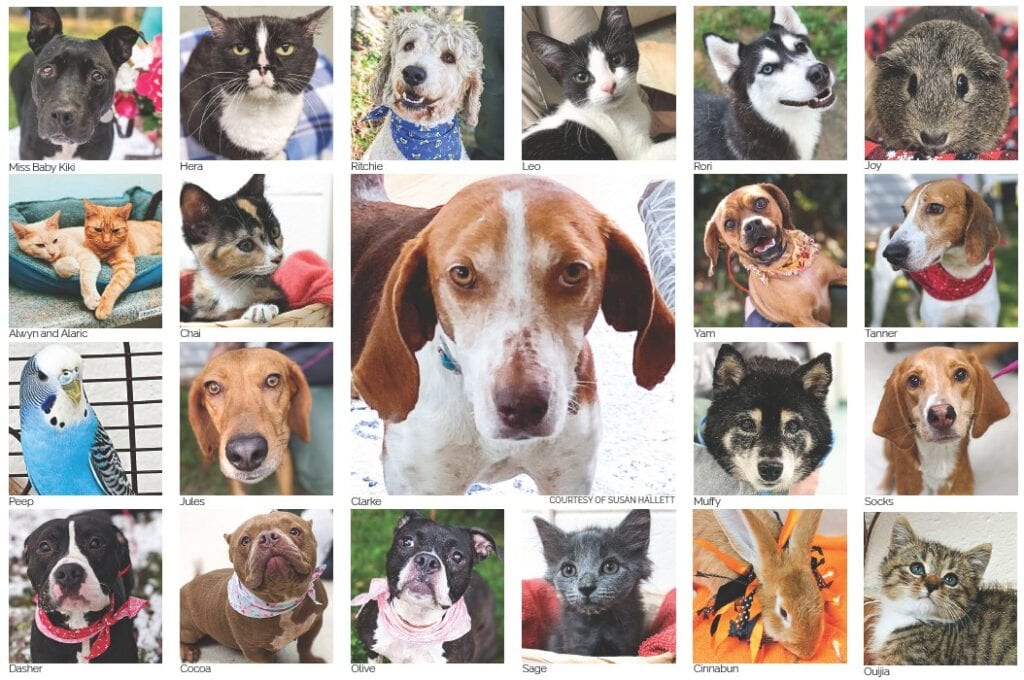 Just a few of the pets adopted through the Chesterfield County Animal Shelter and Richmond Animal League since March, when the pandemic sparked a surge in demand for companion animals. Photos courtesy of CCAS and RAL

Clarke had to learn how to be a dog. A brown and white hound with spots along her legs, Clarke was skinny and shy when she came to live with Susan Hallett and her family in March of this year.

“She didn’t know what to do on a leash. We would get about two feet and she’d sit down,” said Hallett. And she wasn’t used to receiving regular meals. 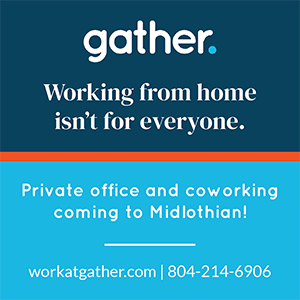 Luckily, Clarke had four humans and another canine to teach her. Hallett was working from home in Tuckahoe for her charitable foundation employer. Her husband has always worked from home for a software company. Their two girls, ages 9 and 12, were in virtual school. Hallett thought those early days of the pandemic would be a good time to foster a dog from a local shelter. They were at home enough to get to know the animal. They could share its personality and quirks with people looking to adopt.

“And it was a chance for us as a family to have something really positive in a time that wasn’t terribly positive,” said Hallett. So she contacted Richmond Animal League in Chesterfield County about giving a dog a temporary home, just until the right forever family came along. 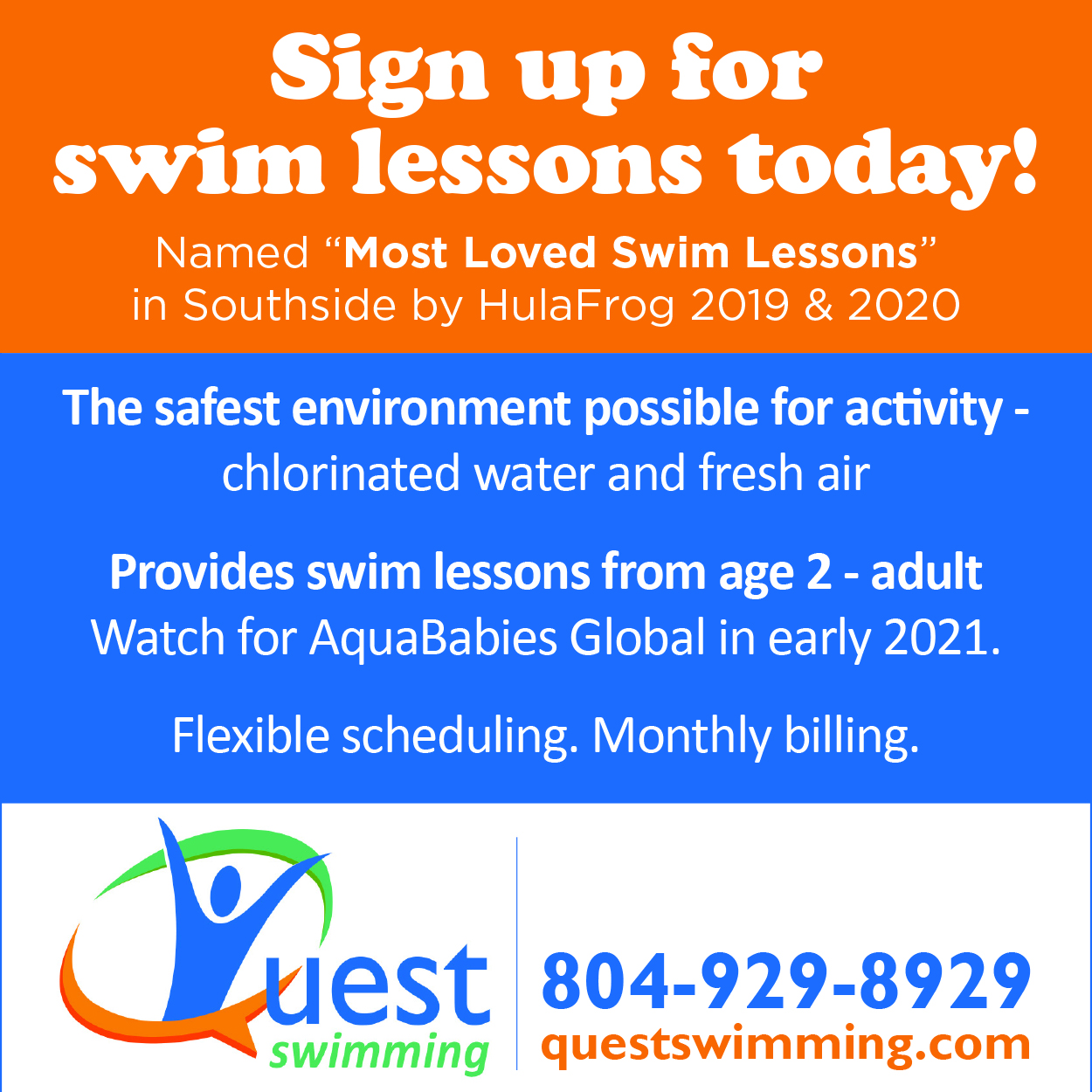 They may have adopted in the nick of time, too. Like many things this year, pets are in short supply in Chesterfield as county animal shelters report lower intake and steady demand to foster and adopt. Homebound families are snatching up furry friends as fast as they come in.

COVID-19 required a quick pivot for adoption operations. Volunteers were sent home. Staff went on shifts. Spay and neuter clinics shut down. But the Chesterfield County Animal Shelter placed animals temporarily with county employees, and the nonprofit Richmond Animal League received over 400 responses to their community call for emergency foster homes – for a small fraction of that number of animals.

At the county shelter now, most animals are adopted within a few days, even the more senior cats and dogs. On a recent day, there were a mere three animals available for adoption. At RAL, off Midlothian Turnpike, people adopted 802 animals between April and November.

It’s a trend shelters have been reporting nationwide this year – one that speaks to our need for comfort and companionship in a time when those things have been stripped away by social distancing measures aimed at keeping one another safe.

“[Clarke] is really the most affectionate dog that I have ever met,” said Hallett. “She took to the girls immediately, cuddling, snuggling. She can sense when we’re stressed or worried, which has certainly been a big part of our lives in the last few months.

“Clarke definitely brought a bright light to our family when we needed it.”

Many animal shelters rely on volunteers, and Richmond Animal League is no exception.

In a normal year, says Executive Director Elizabeth Thomas, their volunteers log enough hours to be the equivalent of 16 full-time staff members. But, between March 16 and June 1, the shelter was closed to non-staff. RAL’s 15 full-time and five part-time staff were split into two teams.

At Chesterfield County Animal Shelter, the first month of COVID-19 was limbo. County code requires the animals to be spayed and neutered before adoption, but the clinic shut down as employees were initially sent home. A call put out to county employees placed about 40 animals in foster homes.

As the initial shock of the quarantine wore off, both shelters report that applications to adopt bounced back steadily.

“I think the biggest difference is length of stay now,” said Carrie Jones, animal services manager for Chesterfield County. “Animals are getting adopted extremely quickly compared to prior to the pandemic.”

After the stray-hold periods required by state law, animals are posted for adoption on the county shelter’s booming social media sites and Petfinder. People snatch up younger dogs and small dogs often the day their photos are posted.

“Then some of the adult dogs, I would say the average [before COVID-19] would be maybe four to five days,” said Jones. “And now it’s within two days.”

Once the clinic reopened, most of the county employees who were fostering animals ended up adopting. 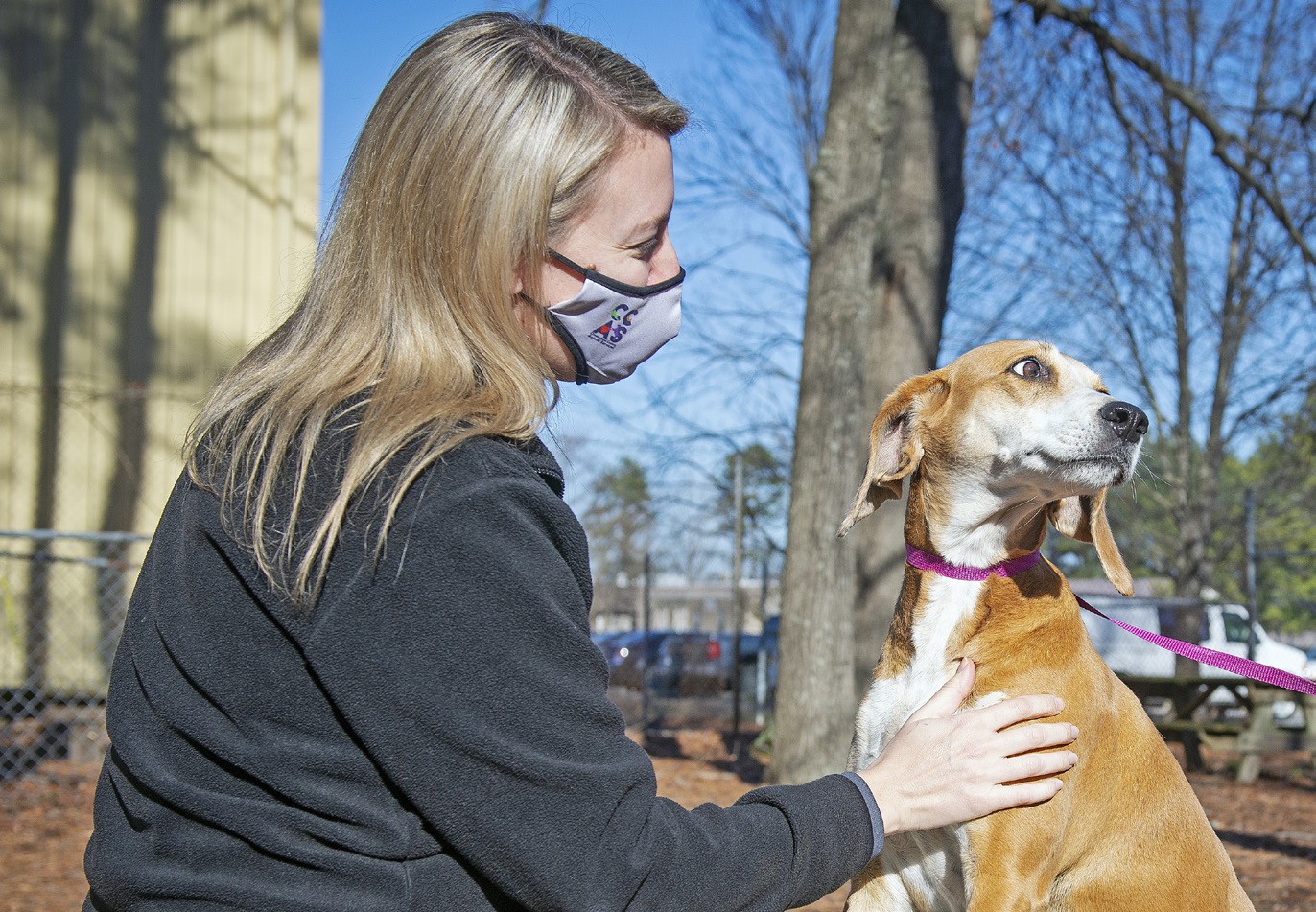 Chesterfield Animal Services Manager Carrie Jones with Sugarplum, a 7-year-old hound and one of a small number of animals available for adoption at the county animal shelter last week. Sugarplum has since been adopted. Photo by Ash Daniel

The recently retired county employee trained to care for newborn kittens after the call went out for fosters. Since then, Finchley and Tippi Hedren have joined her family permanently.

Lau says she fell in love with Finchley, named after the suburb of London. She and her 97-year-old mother call him “‘the supervisor,’ because he has to be involved in every move we make around the house.”

Lau adopted Tippi, a calico with a white tip on her tail, just this month.

“Pets are wonderful, especially now,” said Lau. “People learn compassion by owning a pet. They relieve stress and loneliness, and it’s nice to have something to care for.”

At the Richmond Animal League, Thomas attributes the steady adoption rates to more people teleworking or otherwise isolating at home.

“It’s a wonderful time, with the whole family at home, to integrate the pet,” she said. “They don’t have to worry about getting a pet on a Sunday and then being gone at work all week long.”

“Some [adopters] say that their children are struggling during the pandemic, or they themselves are struggling mentally,” she said. “They want that companionship of a pet to help them get through it. It gives their child a sense of responsibility and something to do each day – walking, feeding, caring for the dogs.”

“I can’t be sure, but I want to say that’s due to people being at home, because usually the dogs escape from the backyard while people are at work,” said Jones. “[The low intake and high demand] is really a good problem to have.”

Intake was also down at the Richmond Animal League, which transfers in pets from animal control partners throughout central Virginia, and Thomas says they have a steady flow of people interested in adopting.

“The inquiries have really been overwhelming in a positive way,” Thomas said. 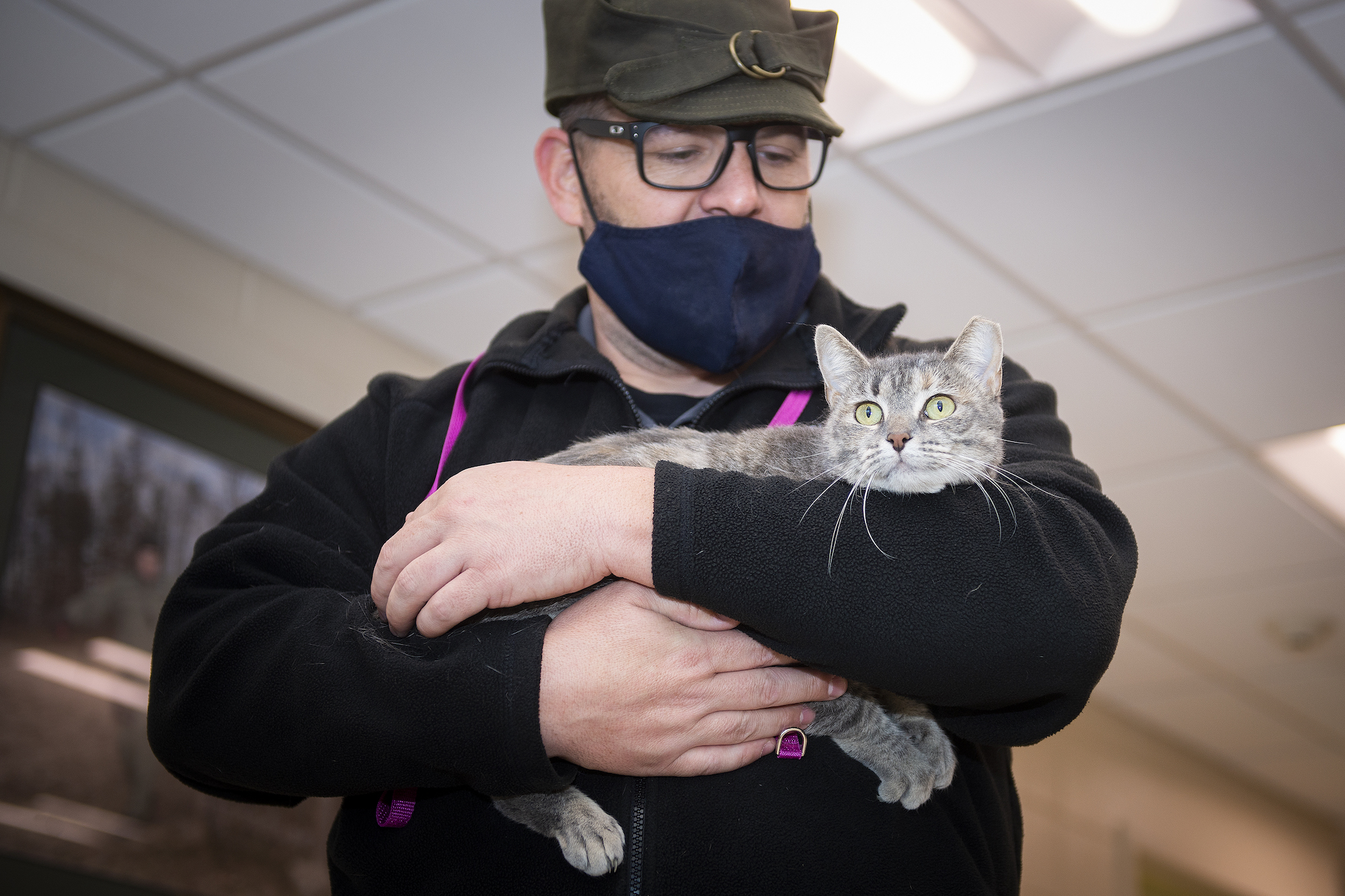 Operations at the shelters also adapted to pandemic protocols.

RAL’s solution to having a split staff and volunteers in quarantine was virtual meet and greets. Foster parents introduce animals to potential adoptees over video. People often adopt pets without ever meeting them in person.

Thomas admits they weren’t sure it would work.

“To ask someone to just make a decision about an animal that they’ve never met and then drive up to the door and put it in their car is a pretty big ask,” she said.

But she says it worked surprisingly well. Fosters see the animal in a home environment and can speak to its personality and behavior, versus adopters meeting an animal in a kennel at the shelter. And the virtual introductions sped up the adoption process, especially for kittens, as meetings can happen any time that’s convenient for both parties.

The Chesterfield County Animal Shelter switched to an appointment model: One family at a time meets an animal they were interested in from the online catalogue. Dog appointments are outside in a fenced-in area. Cats have an indoor space where they meet their potential humans.

The appointment-only model gives the small shelter staff time to fill in the gap from the loss of volunteers, and Jones says it might be there to stay. It creates a personalized experience for adopters and animals, no one waiting for space to meet an animal or to fill out paperwork.

“It’s just you and your family,” she said. “And our focus is on you and finding the right pet.”

While the Richmond Animal League has begun to phase small groups of masked volunteers back into operations, the Chesterfield County Animal Shelter is still volunteer less.

One staffing component at the shelter has phased back in: an inmate workforce from the sheriff’s office. Incarcerated people clean the shelter’s dog runs in the morning and for a while, they couldn’t come.

“Thankfully, we’ve been able to bring that workforce back to help us,” Jones said.

The economic paralysis caused by the pandemic has also affected the shelters.

The county funds the Chesterfield County Animal Shelter and its animal services unit within the Chesterfield County Police Department, and local government budgets are under strain. Pre-COVID-19 plans to construct a brand-new shelter and adoption center near LaPrade Library on Hull Street Road are now in “a holding pattern,” Jones said, due to budget restrictions. For now, they’ll stick with their 1975-built shelter near the government complex.

As a nonprofit that relies heavily on donations from individuals, fundraising is a concern for the Richmond Animal League in the long run. But Thomas is quick to add that the community has continued to step up. In March, RAL opened a pet pantry of resources meant to help people experiencing financial difficulty keep their pets.

“We asked our community to send us pet food to add to the pantry and overwhelmingly we got food,” she said.

Though some fundraising events have had to be converted to virtual or drive-thru formats, RAL’s annual fall calendar contest was a huge success, Thomas said, raising more money than ever. And even without a full shelter, the organization’s annual holiday adoption event, Operation Silent Night, will happen this year.

The goal is to clear out the shelter, through adoption and foster, and fill it with luminaries to remember lost friends – both two-legged and four-legged – especially poignant in this year of COVID-19. The annual luminary ceremony will be held virtually on Dec. 23 and streamed online.

“It’s a really moving experience,” said Thomas, “to see a quiet shelter, an empty shelter, filled with light and love.” ¦