A woman from North Texas is taking on the sex industrial complex in Nevada, and we hope she wins.

Rebekah Charleston is an activist who leads a Southlake-based organization that helps women who have been sexually exploited. A victim of trafficking herself, Charleston uses her tragic story to bring hope and rescue to others. And now she’s using it to sue the pants off brothel owners.

Last year, Charleston sued the state of Nevada, claiming that laws there allowing legal prostitution made it easier for her to be trafficked and violated interstate commerce statutes. Charleston claims to have been trafficked in legal brothels in Lyon County. Her suit seeks an injunction to stop Nevada from allowing prostitution. It would also create a $2 million fund to help women leave the sex industry. Her case was dismissed by U.S. District Judge Miranda Du in Reno last year, and it was similarly rejected on appeal by the 9th Circuit Court of Appeals in San Francisco this month.

But this time the court suggested an alternative argument that could help the suit clear a legal hurdle, a rare and promising move. Charleston’s lawyer, Jason Guinasso, said that cracked open a door of opposing trafficking on constitutional grounds, a big step forward. He plans to file a new complaint soon. Guinasso called the work thus far a “first step to creating change in our laws” and noted that cases like this can take years to build by fits and starts.

On Christmas Eve, Charleston received a pardon from President Donald Trump for crimes she committed while being trafficked. The White House news release noted that “she obtained a master’s degree in criminal justice and has worked tirelessly to give a voice to the voiceless victims of sex trafficking.” 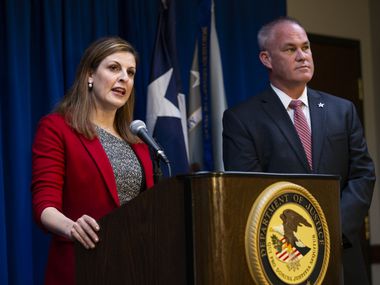 What interests us, beyond the David-and-Goliath matchup that pits a North Texas woman against a behemoth sex industry, is its impact on sex business around the country. In recent years, legislation to decriminalize prostitution, or at least study the possibility, has been introduced in New York State, Washington, D.C., Massachusetts, Vermont and New Hampshire. Last summer, then-presidential candidate Kamala Harris told BuzzFeed News she favors decriminalization.

“A win in Nevada could be history-making for the rest of the country,” Charleston said. “It could prove that legalization doesn’t make it safer or healthier and doesn’t remove trafficking. It only increases it.”

Proponents of decriminalization say Charleston’s effort is judgmental and prudish. One called it “an outdated law based on moral outrage.” But here’s the thing: There is a place for moral outrage. When women and girls are enslaved and sold for sex, that’s the place.

We hope Guinasso keeps fighting. We hope the judges who consider this case in the future see the common sense behind Charleston’s plea. We hope wisdom prevails in states considering legislation that would make trafficking easier. And we hope Rebekah Charleston keeps punching above her weight. If she prevails in Nevada, it will be a knockout win for the country.