A possible wave of forced evictions could wash over Leon County 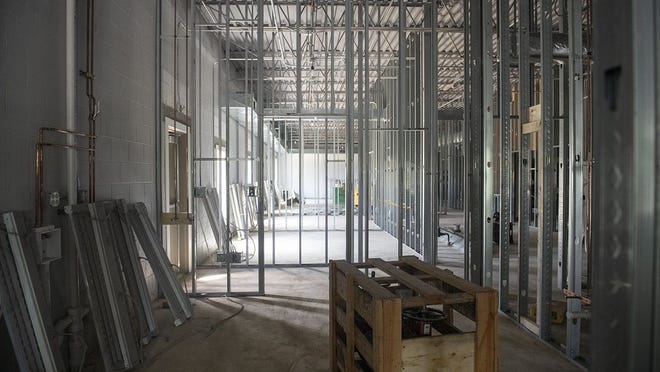 Keeping people from being evicted in the middle of the pandemic means including landlords in coronavirus relief efforts, local officials say.

The specter of mass evictions once a federal moratorium sunsets on Dec. 31 prompted the Tallahassee City Commission last week to approve a $250,000 program aimed at landlords.

It’s a small piece of the eviction puzzle, an admittedly complex one, but one that aims to keep usually reliable tenants under a roof by offering landlords help.

“We need to partner with our landlords. They are finding themselves between a rock and a hard place,” said Aben Ojatayo, the director of the city’s Housing and Community Resilience Department. “While the issues are dire and the situation is indeed a crisis, I do think we have the tools in our community to innovate.”

More:Tallahassee family with child who has disabilities faces eviction by end of December

The fund comes from existing local, state and federal funding. Although just a starting point, it’s meant to be a backup that could supplement security deposits and cover other services that are part of the housing equation.

In addition to creating the Landlord Risk Mitigation Fund, city commissioners asked staff to explore the option to create outdoor shelters similar to one in Hillsborough County.

But that could be considered “camping.” That means officials may bump up against local ordinances that allow camping in Leon County only at three campgrounds on Lake Talquin. There are roughly 40 camps of homeless people spread throughout the county currently, officials say.

‘What’s coming is much more dire’

City Commissioner Jeremy Matlow said there are two discussions surrounding homelessness, which he said was his top priority.

Chronic homelessness has been considered for years by the commission and there has been a focus on attainable housing and including more partner agencies. But the immediate crisis of forced evictions has forced their hand, as people struggle to make ends meet through the pandemic.

“What’s coming is much more dire as has been expressed,” he said.

Ojatayo said low income rent prices pre-COVID averaged around $1,000 for a single bedroom. One with three bedrooms cost on average $1,500.

City officials are predicting hundreds, maybe thousands, of people may be faced with being forced from their homes. Ojatayo said it’s the ones that are already income-constrained who need the most help.

“The folks that are going to feel it the most are those that were already on the edge; those that are a few hundred dollars away from a crisis,” she said.

Legal Services of North Florida is waiting to see the volume of eviction notices that will be filed in court at the Dec. 31 sunset of the moratorium. Currently there are 264 people seeking legal help with evictions and foreclosure, said senior attorney Stephanie Johnson, who added those numbers are up 60% during the month of November from the same time a year ago.

“A moratorium without rental or other safeguards in place, we’re just kicking the can down the road,” she said. “And eventually it could be Dec. 31 that road ends and we have hundreds of evictions outstanding in Leon County.”

On average, LSNF sees about five eviction clients a month. As of late, it’s been about three a day, Johnson said, and has included healthcare workers, teachers, office employees.

Most had not had evictions issues in the past and were reliable long-term renters but have been laid off. Foreclosures have not started to show up but are expected.

“People are saying they know they have to leave on Dec. 31, but they cannot find housing in Tallahassee,” Johnson said. “Mostly we’re telling them to prepare to move since for a vast majority of them their leases ended long ago. So you can imagine that is not very comforting advice.”

Amanda Wander with the Big Bend Continuum of Care said the unsheltered population in Tallahassee is growing, and what the organization has found is that pandemic-linked unemployment is having impacts on those in housing and rapid rehousing efforts.

“A lot of landlords are hesitant to renew leases and work with clients that are already in their housing if that client has lost employment or doesn’t have adequate access to sustainable income,” she told commissioners.

More:Faces of homelessness in Tallahassee: Meet 15 people living on the streets or in shelters

Even when programs, such as the CARES Act and local rapid rehousing efforts allow payments to landlords while residents have no income, landlords remain reluctant.

“The landlords are not willing to accept those people because they don’t have the security of having that rental income past when the assistance is provided,” Wander said.

There is less room in emergency shelters because of COVID, making a sudden influx of unsheltered people something the organization is unable to handle. But funneling people through the usual channels when they face homelessness isn’t an option either, she added.

“The homeless system of care shouldn’t be our default response to evictions,” Wander said.

At the poverty level, the affordable rent for a single bedroom was $340 a month, something that may still not be attainable without input from landlords, Matlow said.

Almost half of the local population is cost burdened when it comes to housing, he added. That demand won’t go away, so there is a need for more public housing options.

“We’ve heard a lot about people who can only afford $200 a month. We know that there’s probably not a private market that is willing to stand up and meet that demand,” he said.

Leon County’s implementation of its $51 million in federal CARES Act funding has already provided some stability in the housing markets. It provided $3,000 per applicant and paid it directly to the party owed, landlords, mortgage holders and utilities.

In all, $7.5 million has gone to 3,297 applicants, representing direct relief for 3,300 households. Another 3,800 applicants were not able to receive assistance through the program.

There are 12,200 past-due accounts totaling a balance of over $8 million. The city has received roughly $809,000 in federal funding to cover past due utility bills.

In Washington, the approval of a stimulus package remains uncertain, but still being discussed in proposals is individual assistance similar to the $1,200 checks that went to Americans earlier this year.

City Commissioner Dianne Williams-Cox said there was a reality that local government may not be able to fund everything. She urged federal lawmakers to act.

“If anyone in Washington is listening, we need a stimulus bill ASAP. That would help more than anything to keep individuals afloat and to keep cities and counties afloat,” she said.

“We should not be in this position to figure out how we can split pennies to help our neighbors in this time of crisis.”