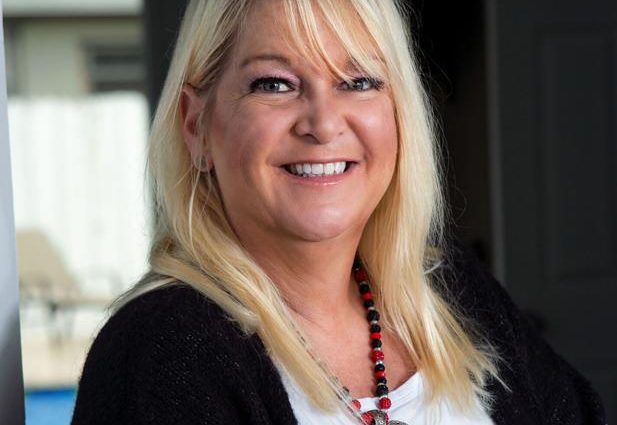 Human trafficking is the epidemic that we didn’t know was an epidemic.

The topic of this year’s Sacred Heart Endowed Chair Symposium, funded by the Benedictine Foundation of Sacred Heart Hospital and hosted by Mounty Marty University (MMU), was human trafficking — specifically, the trafficking of women in the sex trade.

Presented at MMU’s Marian Auditorium Thursday, the event, which aims to improve the care of individuals through education of caregivers, featured activist, author and survivor of human trafficking Theresa Flores.

“It’s the worst kind of epidemic, an epidemic that is silent,” Flores, who was trafficked for two years in high school until her family moved elsewhere, told attendees. “It has been my goal, my mission in life, to be able to spread my story.”

“Let’s start off with a definition; ‘What is human trafficking?’” she said. “It is the recruitment, harboring and or transporting of an individual by force, fraud or coercion, for the purposes of sexual exploitation or labor.”

For many people, the term “human trafficking” conjures images of women in cages, Flores said. As dark as the subject is, that occurs, but is not the norm.

“Let’s define commercial sexual exploitation,” she said. “It can be stripping; it can be pornography, videos, pictures and it can be escorting, which we also call prostitution. It can be any one of those things because somebody can be benefiting financially off of the act.”

By federal law, any individual involved in commercial sex that is under age 18 is a victim of trafficking, she said.

“What that means is, in our country, there’s no such thing as teen prostitutes,” Flores said. “Child prostitution does not exist because no child chooses to do that.”

According to Flores, whose area of expertise as an activist involves domestic sex trafficking of minors, 80% of sex trafficking victims in the U.S. are women, 50% are children and about 20% are male. About 40% wind up dying, she said.

Labor trafficking often occurs on farms and in hotels, nail salons, restaurants, ethnic restaurants and factories, and people that come door to door are often being trafficked. Frequently, in these situations, the victims’ documents have been taken from them so they cannot leave for another job.

Victims of sex trafficking are often tricked or blackmailed into the life by a pimp, who could be a stranger, but could also be a boyfriend, parent or close family member, she said.

“The average age of entry into forced prostitution in the U.S. is 13,” Flores said. “We work with quite a few survivors that started off being abused and molested by family members, and then were sold continuously after that.”

Ethnically and racially, human trafficking knows no bounds, she said.

“The FBI and the Department of Homeland Security have told us where there would be high risks for human trafficking in South Dakota,” she said. “Truck traffic is, a lot of times, a way that victims are transported from one state to the next state.”

Also, during some of the state’s larger events, including the Sturgis Motorcycle Rally and pheasant hunting season, the demand for “sex for sale” increases, she said.

College students are also at great risk from human traffickers.

“A young college student said to me, ‘I work in a local grocery store and one evening, when I was running the cash register, a lady came through my checkout and said, ‘You’re really pretty. I can make you more money than you make here,’ and she handed me her business card. I had read your book and I knew what this was.’”

Often, people see the signs of human trafficking but don’t recognize them, she said.

“What would you have done if you saw that?” Flores asked attendees. “Would you have thought human trafficking was going on?”

One thing individuals can do is open a discussion with the young women or minors who come to mind when thinking about human trafficking, and ask them if they are OK. You might have to initiate the conversation many times over.

“Also, If you see something, say something,” Flores said. “It could be 911, it could be River City Domestic Violence Center, but make sure that you tell them everything you saw.”

Self-education on human trafficking, even via a Google search, can be helpful, she said.

“South Dakota ranks 11th in human trafficking for a reason. You’ve had the most convictions for a reason,” Flores said. “It is going on here and people have seen it. They just didn’t know what they were seeing.”