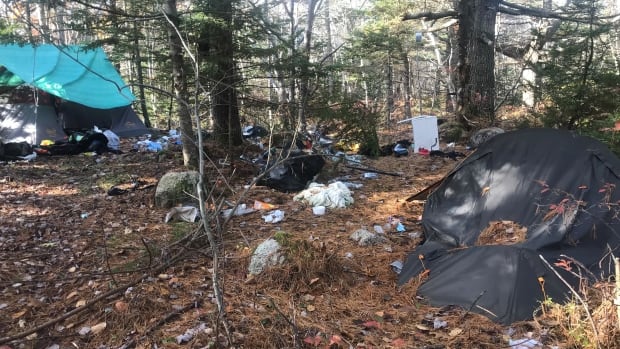 Three abandoned tent sites that were recently cleaned up at a provincial park in Halifax offer a glimpse into the reality for a growing number of Nova Scotians forced to sleep outside.

The encampments in Long Lake Provincial Park, off St. Margarets Bay Road, were located away from the main trail in a wooded area. They were discovered this fall, and later cleaned up by 13 employees with Halifax Water over two days this month, said spokesperson James Campbell.

“Your heart goes out to the folks who are living in these situations. They were clearly living pretty rough,” he told CBC’s Information Morning on Friday.

Campbell said the sites looked to have been abandoned for some time “based on the decaying food, and some of the tents were still up and some were flattened, and just a lot of debris strewn around.”

The number of people who are chronically homeless in Halifax has more than doubled since last year, and with shelters at capacity due to COVID-19 restrictions, advocates say more people are sleeping in tents, or under tarps, park benches and other places outside.

Eric Jonsson, who works with the Navigator Street Outreach program, does informal surveys of the number of people sleeping outside and estimates about 40 people in the Halifax area don’t have shelter right now.

He, and a group of other service providers, spoke with 23 of them this week, he said.

“I see a bunch of people who are allowed to access shelters, and they want to go to a shelter, but every time they call, they just are told that the shelter’s full, try calling back tomorrow,” he said.

This is a big change from previous years, he added, where many people sleeping outside either didn’t want to stay at a shelter or were barred from doing so.

The latest survey was done on Wednesday, the same day the province announced temporary relief for renters. Jonsson said he’s happy to see the province taking steps, but likened the measures to rearranging deck chairs on the Titanic.

“If we do another count three months from now, I predict there’s not going to be a huge drop in the amount of people sleeping outside because it’s just such a widespread problem,” he said. “The province has been doing not a lot for a long time.”

He said government needs to build hundreds of affordable units every year to help all the Nova Scotians who are homeless.

“Ideally, we just need to spend as much money and build as many affordable housing units as we can … and over years, not just like one-time things.”

On Wednesday, Housing Minister Chuck Porter announced $1.7 million in funding to replace 30 beds removed from the homeless shelter system as a result of changes required by Public Health protocols for physical distancing.

The minister said meetings are imminent with service providers to determine how to get as many people off the streets as soon as possible. Porter said the government is committed to finding ways to address the issue.

Campbell said the people who helped clean up the sites found 900 kilograms of garbage, as well as 250 hypodermic needles. He said it appears people had been living there over a long period of time.

“It’s a real hazard for park users,” he said. “You know, lots of folks let their dogs run loose in these areas that are kind of, I guess, off the beaten path. And there could be families back there and their kids are running loose a little bit and they stumble on some of these things. It’s not a good situation whatsoever.”

He encouraged Nova Scotians who find abandoned campsites not to go near them but to get in contact with Halifax Water staff.

Jonsson said Halifax is a tight-knit city and people look out for one another. He’s hopeful whoever was staying in Long Lake Provincial Park has found somewhere warmer and safer to go.

“Everybody kind of keeps an eye on each other, and … I’m hopeful and I’m pretty sure that they’re probably doing better than they were when they were living in a tent,” he said.