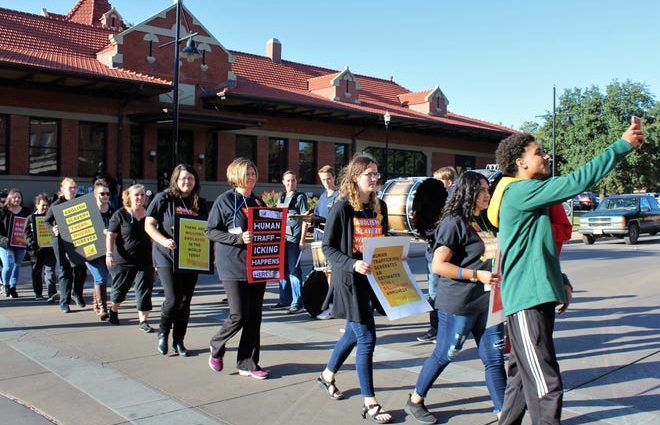 Stephanie Rocha has a few goals for the Saturday’s Abilene WALK for Freedom.

Like last year’s inaugural event that aimed at raising awareness of human trafficking, Rocha hopes this year’s edition, set for a 9 a.m. start at Everman Park, helps put a dent in local rings.

She’s brining in a guest speaker who’s qualified to help lead the way.

Allison Franklin has been there before, Rocha said, and will be able to shed some light on signs of modern slavery.

“She’s the first person pardoned by the governor for crimes committed while in the sex trafficking world,” Rocha said. “She’ll be speaking about what to look out for and sharing her story.”

Franklin spent 10 years as a trafficked individual, but she’s turned it into a position as senior director of the SAFE Alliance’s CARES program in Austin, which provides support and care for those sexually exploited.

Rocha is the founder of Beyond Trafficking.

It’s a faith-based nonprofit established a year ago to create “a world without exploitation where every human is free with a network of resources and services to bring awareness to the public, prevent this atrocity, and lead survivors beyond the bonds,” according to Beyond Trafficking’s website, beyondtrafficking.com.

It was the end of August when a woman jumped out of an 18-wheeler at a truck stop in Cisco. Days later, a second woman believed to be the victim of sex trafficking was located.

While Rocha said her group was not involved in that case, it does show that Abilene and the surrounding areas are not at all immune to the practice.

“When we started this venture, we kind of felt like Noah,” Rocha said. “We were yelling that the flood was coming and no one believed us. But it does happen here in Abilene.”

Abilene Police investigated a reported attempted kidnapping in August, as well, that included social media allegations of the suspect being tied to human trafficking.

Police said the instances were unrelated to each other and likely didn’t involve attempted kidnapping or human trafficking.

With Abilene not immune, Rocha said her group’s other goal beyond education is created a true safe space for survivors.

The closest ones to Abilene, she said, are three or four hours drive away from the city.

So, it’s time for the Key City to provide safety to these individuals when found in Abilene, she said.

“We’re having to take them other places when they’re found,” she said. “That’s not feasible all of the time. So we’d like to set up the shelter here.”

Dealing with the pandemic

The outdoor event Saturday will make masks and social distancing highly recommended. But they can’t mandate anything, Rocha said.

Masks will be provided to those who wish to use them, as will hand sanitizer.

“But we can’t enforce anything because this is an outdoor event,” she said. “It would be a lot different if it was indoors. We can space out outside.”

Just like last year’s walk, the plan is to form a single-file line of people that Rocha said serves as reverence for survivors.

Unlike last year, she’s hoping there will be more space between people in the line.

At the end of the day, though, she said she wanted the event to take place after so many have met an untimely demise due to the pandemic.

Please consider, if you’re able, purchasing a digital subscription to ReporterNews.com to help support the hard work of education reporter Timothy Chipp and the rest of the staff so Abilene’s entire story can be told. Without you and your support, this operation is impossible.