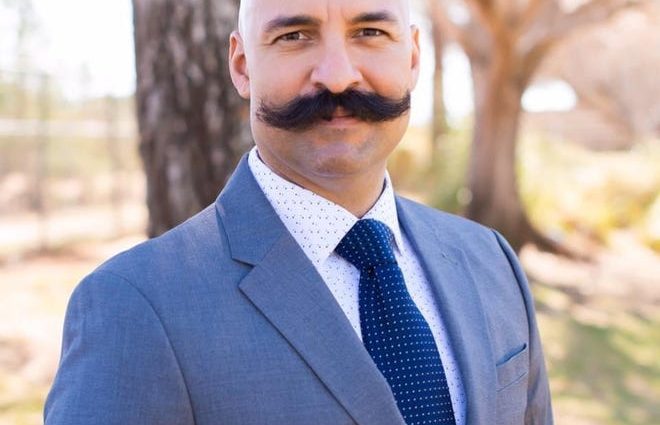 As a first responder in Victorville, Adam Verduzco said he gets a “‘behind the scenes’ view of what is actually occurring in our city.”

“We have a lot of good, hardworking people in Victorville who unfortunately are not being represented by their council. Many feel unsafe, are disappointed with law enforcement response times, and are dissatisfied with how our city looks,” he said. “I want to be their voice.”

Verduzco is one of 22 candidates vying for three open seats on the City Council, two of which are being contested by incumbents, Mayor Gloria Garcia and Councilwoman Blanca Gomez. Councilman Jim Cox — elected in 2012 and a former longtime city manager — is not running for reelection.

The following story was sourced from responses to an email candidate questionnaire, unless otherwise indicated. Some answers and statements have been edited for length and clarity:

Verduzco, 39, completed paramedic training at Victor Valley College in 2007 and has worked for American Medical Response in Victorville since 2008.

He said he originally thought he’d leave the High Desert, but his plans changed when he met his then girlfriend and now wife, Amanda Verduzco, with whom he has two children.

“When we made the decision to stay in the High Desert, we clearly noticed that Victorville provided the ‘city feel’ that I desired, and like so many others who have migrated here, I was able to purchase an affordable home in a nice community that I’m very proud to be part of,” he wrote.

For the past four years, Verduzco has served on the Board of Directors for the Cypress Pointe Homeowners Association. His responsibilities have included working to maintain common areas, making capital improvements and managing the association’s finances, he said.

A search of campaign finance records show no contribution forms filed by Verduzco as of Wednesday.

Verduzco said he was motivated for several reasons to run for elected office, such as “showing up to work everyday seeing our city run by drugs and homelessness.”

He said his main priorities are lowering crime and homelessness rates. He cited statistics from the city’s public safety plan, which reported that fewer than 10 deputies patrol Victorville daily.

“With a population of nearly 130,000, 6-8 patrol deputies is simply not enough. That’s roughly one deputy for every 16,000 people,” he said. “Victorville has a crime rate that is higher than 78% of California’s cities and towns.”

The last statistic appears to be taken from HomeSnacks, a website that ranks communities. According to the FBI’s Uniform Crime Reporting Program, however, Victorville did report 988 violent crimes in 2019 with a population of 123,089, placing it well above California’s average crime rate of 441.2 violent crimes per 100,000 people.

Verduzco said he supported Measure P — the one-cent sales tax increase being proposed in November — which city officials have said would add 30 police personnel and staff an additional fire station.

“As a resident living in Victorville, I have to support Measure P because I know what’s at stake,” he said. “If Measure P doesn’t pass, the city may have to cut or lessen services which we simply cannot afford to lose.”

A dumping ground no more

Regarding homelessness, Verduzco said he spoke to unsheltered people who admitted being brought into the city from other areas. While he says he understands “fully the humanitarian aspect of caring for our homeless,” Victorville does not have the resources to “absorb any more.”

The city has had the second-highest population in San Bernardino County for three years in a row, counting 451 in 2020, according to the Point-In-Time Count.

“The proposed 168 bed homeless shelter can support less than half of our homeless population, but will certainly continue to draw more and more from surrounding areas,” Verduzco wrote. “We need a council member who will make it known that Victorville will no longer be a dumping ground.”

Verduzco said the city needed to enforce trespassing and loitering laws and “create limits on where homeless people can set up their encampments.”

City officials have said the interim shelter and recuperative care center — planned to be built near Eva Dell Park — is needed in order to enforce anti-camping laws per a 2019 9th Circuit of Appeals ruling.

“As a first responder serving in Victorville for over 12 years, you will never have to question my commitment to you,” he said in a statement to voters. “Keeping this city safe will be my highest priority. With a little hard work and dedication, together, we can move Victorville forward.”