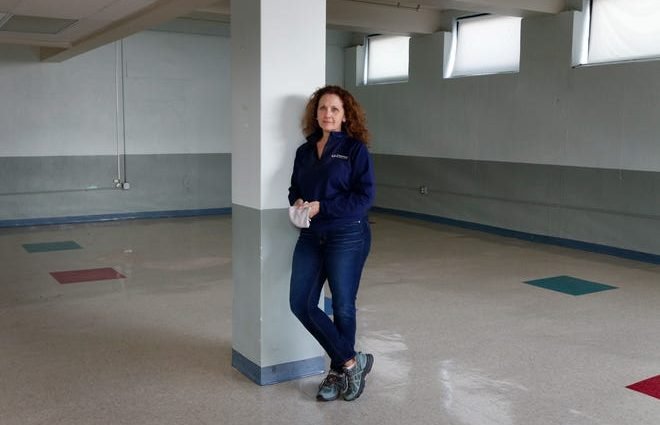 Even amid the gloom of a terrible year, advocates for homeless people took some time on a recent Friday in late October to recognize the work they’ve been able to do amid the COVID pandemic.

Because it’s 2020, it happened via Zoom. Amid speeches from elected officials and recipients of annual awards, Caitlin Frumerie, executive director of the Rhode Island Coalition for the Homeless, provided a status update on homelessness in Rhode Island. She started with a bit of clipart summing up the year: A dumpster on fire, labeled 2020.

“It is getting worse, and really it’s because of the gap between income and what housing costs in our state,” Frumerie told attendees of the coalition’s annual awards breakfast.

As Rhode Island heads into the coldest months of the year, the state of homelessness is an unfolding disaster, an emerging crisis of unsheltered homelessness, with a state response that has been too little, too late, and with too much red tape.

The data bears out this grim picture. As year-round homeless shelters cut capacity in an effort to promote social distancing and keep the virus from spreading, the number of available year-round beds went from 486 before COVID to 325 during COVID.

Before COVID, there were 121 winter shelter beds available. Although more are going to be available this year with new funding, it’s not clear how many there will be. Hotel vouchers are available for people — 14 at last check.

That will do little to make up the deficit. The coalition estimates that there were 169 unsheltered homeless people in the state in September 2019. In September 2020, that rose to 325, a 92% increase.

New funding for things like emergency shelters and rental assistance started trickling out last Thursday through the state; it snowed about an inch and a half in Providence a day later.

The tally of unsheltered homeless people who were out in that sort of dreadful and dangerous weather probably underestimates the problem because it doesn’t account for people who have no contact with the system. It also doesn’t include people who are simply at risk of losing their housing, or fall under different definitions of homeless and housing insecure, like if they’re couch-surfing or staying in unsafe places.

These are people in the woods, in cars and campsites, in weedy vacant lots and by the banks of suburban rivers, living in places not fit for human habitation. Meanwhile, COVID cases among people experiencing homelessness – whose life expectancy is 49 years – spiked in October.

In other words: It’s a dumpster fire. And it’s growing.

“We immediately need shelter and rental assistance for people staying outside, particularly for those who are very vulnerable,” Frumerie said in an interview. “People with health risks. Amputees, veterans, all these people living outside just dramatically at risk for COVID.”

On Friday, the same day much of Rhode Island and its hundreds of homeless peoplewere covered in a blanket of snow, the state provided The Journal a list of funding decisions for temporary emergency shelter and other critical needs for homeless people. The money came through the U.S. Department of Housing and Urban Development funding as part of the CARES Act, a massive rescue package passed in March. (A second rescue package faces uncertain prospects.)

The money included $1.9 million for rapid rehousing, $320,000 for street outreach, $200,000 for winter shelter and almost $1.2 million for emergency shelter. The decisions were made through the state’s Office of Housing and Community Development; the state declined to make someone from that office available for an interview.

“I hate that we have to shift to add shelter beds and not housing,” said Laura Jaworski, executive director of the homeless services group House of Hope CDC. “The fact is, the demand has just exploded. We’ve been putting gum on the cracks of a dam for a very long time. COVID has caused that dam to have significant breaks.”

Jaworski’s group has requested funding for a “tiny homes” program, which would rapidly construct no-frills living spaces for temporary emergency shelter until the state could catch up on permanent housing.

Just before Halloween, the state informed House of Hope that it would get about a quarter of the funding it needed to run the tiny homes program, Jaworski said. But even as the state slipped into a cold spell, House of Hope still doesn’t know how it will be able to use the money. And to make up the gap in funding, she’s thinking about setting up a GoFundMe for private donations.

“I don’t want to be building this in February,” Jaworski said.

The irony of the current situation is that there’s funding flowing into homeless services right now, particularly from the federal rescue package passed in March, said Karen Santilli, executive director of the state’s largest shelter provider, Crossroads RI. There’s just not enough of it. And there’s also a lot of bureaucracy around it, on multiple levels of government, and a lot of need to use it, not soon or next week or tomorrow but right now.

“We have the money,” Santilli said. “We know what we need to do. There’s all this red tape.”

For instance, her organization is working on turning a piece of property at Pine and Stewart streets in Providence into an emergency shelter space. They had to get one source of funding to acquire the property, and another to actually run it. As she was interviewed for this story, Santilli was still waiting on a special use permit from the city to open it.

“It’s a process that makes sense for normal times, but we’re not in normal times now,” Santilli said.

A few hours after the interview, they got approval from the city. That, and much more, will be needed: Unemployment is way up and odd jobs are harder to come by, forcing people into homelessness. But somehow, the real estate market is hot, hot, hot.

Before COVID the family shelter waitlist had 20 families on it, Santilli said. In October it had 57. These are families who might be in cars, or unsafe buildings, with children who are trying to do remote learning from wherever they can.

To discuss the issue of housing and its response to homelessness,the state made Kim Ahern, legal counsel in Gov. Gina Raimondo’s office who’s worked on housing policy, available for a 10-minute phone interview (it stretched to 13 before a press aide cut in to end it).

Ahern said addressing the unique challenges of homelessness during COVID been a top priority from the beginning of the pandemic. Steps to address the crisis in housing insecurity during COVID have included a program to match landlords who have space with families who need it. The landlords could get sign-up bonuses from the state by participating. (One advocate for homeless people said the program has been successful, but included many units that were priced outside of their clients’ typical price range.)

The state also has a rental assistance program, but Ahern acknowledged the money could have gone out the door more quickly. And the state put aside hotels through a Federal Emergency Management Agency contract to allow shelters to spread out more; dozens of people were transitioned from hotel rooms into housing, but those hotel contracts have lapsed, and the need is as great as it’s ever been.

“We know we are facing a very difficult and extraordinary challenge this winter,” Ahern said. “We know there’s not one thing that’s going to solve all these problems, and that it’s a complex issue.”

The governor’s office has long recognized that the problem, at root, is a lack of investment in affordable housing, Ahern said. That’s why it included a dedicated fund for it in the proposed fiscal year 2021 budget, through an increased tax on real estate sales over $500,000. It also upped a bond proposal for affordable housing, the typical ad hoc way the state has invested in it for years.

All of that is in limbo as the state waits to see what sort of help, if any, comes from Washington.

The state’s long-running lack of investment in affordable housing — Rhode Island is the only state in New England without a dedicated funding stream for it in the budget — has had real consequences: According to Housing Works RI, a person making the state’s median income for renters couldn’t afford to rent a two-bedroom in any city or town in the state. A person making the median income for buyers could afford to buy a two-bedroom only in Central Falls. That was based on 2019 data, from before COVID sent unemployment, and home prices, skyrocketing.

So now the state has to get back to shelter beds.That’s a bandage on a wound that’s been festering for years. The system has been malfunctioning for a long time, and now, in a moment of crisis, it’s falling apart.

“We who are providers talk about the 10-year plan we developed 20 years ago,” said Eileen Hayes, executive director of Amos House, a Providence-based soup kitchen and social service agency with a shelter program for homeless people. “There are pieces working, but not an entire plan, and that’s the frustration.”

Like last year, Amos House is planning on running a winter shelter for people experiencing homelessness. They also have a 90-day drug treatment program.

Amos House got funding through the state to run a winter shelter program, with 45 beds.

Other money went toward rapid rehousing to get people in apartments, “which will be great once we get folks housed,” Hayes said. “But we still have a crisis of a winter of not enough shelter beds for people in need.”

The head of the state’s Office of Community and Housing Development, she said, wasn’t making the budget. He was making do with it.

“The need is just greater than what we can do,” Hayes said.

Frumerie, executive director of the Rhode Island Coalition for the Homeless whose dumpster fire metaphor drives all this home, said in an email after the state’s funding decisions were announced that more was needed to address the crisis.

“We understand that everyone is burned out,” Frumerie said. “The state has so much to tackle. This is such a difficult time. But if we come together, we can fix this. We can do this.”

2020-11-06
Previous Post: In California, labor traffickers rarely brought to justice
Next Post: Returning Human Trafficking Victims at Risk of Being Rejected by Their Family in Albania – Exit