Advocates For Responsible Fatherhood Say Men Are Rising To Challenge 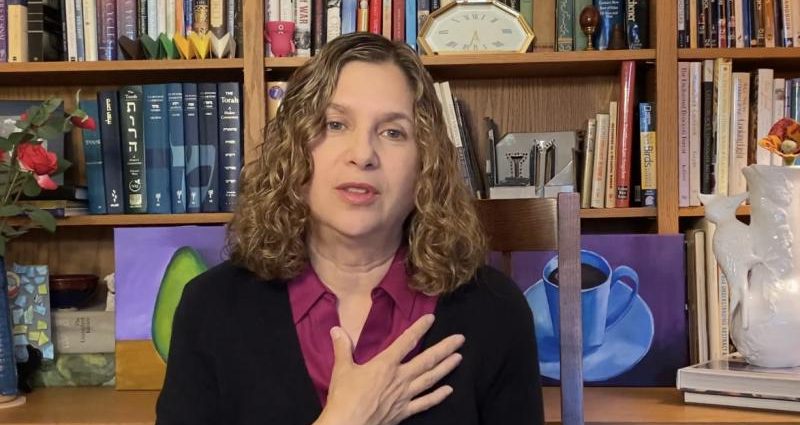 The COVID-19 pandemic has taken an emotional toll on many, including single fathers and dads who don’t have full-time custody of their children. However, the leader of a state commission to provide positive involvement by both parents in their children’s lives says men have risen to the occasion.

“Dads had to keep kids’ noses on those presentations,” he told a group of social workers during a statewide virtual symposium on Saturday. “This (supporting online education) is on top of keeping kids safe from the virus, sometimes with little or no co-parenting.”

Rabbi Rebecca Dubowe of the Moses Montefiore Temple in Bloomington was among presenters. She was chosen, in part, because she is listed by The Jewish Daily Forward as one of 50 influential female rabbis in America and she’s a passionate advocate for the inclusion of children of all abilities in schools and synagogues.

Dubowe, who has moderately severe hearing loss, learned to overcome challenges at an early age, and she said that is something parents do for their children — help them learn that lesson.

“Let them fall because if you never let the child fall, they will never learn,” she said. “But they will always know that their parents, their father and mother, will always be there holding onto them and giving them encouragement.”

In turn, Dubowe says children need to accept parental advice and guidance, but that won’t happen if parents don’t model how to show respect.

“If we don’t teach our children to honor us, then we will have a very difficult time teaching them anything else. If we demonstrate the way of honoring our parents, then children will more likely respect authority; the older generation as well.”

Dubowe also turned to the Talmud, a text written by rabbis and the primary source of Jewish religious law. She says the spiritual script instructs fathers to provide for their children’s education and to find them a spouse, but Dubrowe says the text also makes a surprising reference to teaching kids to swim.

“We want to teach our children how to be independent. That is why there is so much emphasis on this simple act — to teach children to swim so they can stay afloat and remain independent and also strong,” she suggested as the interpretation of the message as a metaphor. “They must learn to navigate storm waters.”

Retired District and Circuit Court Judge George Timberlake, who now serves as chair of the Illinois Juvenile Justice Commission and a member of the Federal Advisory Committee on Juvenile Justice, says many children today are victims of stormy parental relationships in which custody battles are often more about control than what’s in the best interest of the child.

Timberlake grew up in poverty with nine people living in a three-room house. But he said it didn’t matter because they were all together and he saw a loving relationship between his mom and dad.

“That’s what fatherhood is,” he explained.

He offered, “The best thing you can do for your child is to love his mother — not necessarily romantically, not for something or in exchange for something, but to provide a path where your child can respect you and learn a lesson to follow good behavior.”

According to Timberlake, there’s also science to support the importance of peaceful co-parenting. He says research into juvenile delinquency shows the long-term effects of childhood trauma on the brain which can have a lasting impact into adulthood.

“We need to look at increasing strengths and decreasing risk factors and your kid is going to have a better life.” He added, “The same for adults for that matter.”

Che Smith, better known by his stage name Rhymefest, is a Chicago-based hip hop artist, philanthropist, and Grammy-winning songwriter credited with co–writing Kanye West’s “Jesus Walks.” Rhymefest paints a complex portrait of fatherhood in a song written for a documentary “In My Father’s House.” The film is about reuniting with his estranged father, learning he was homeless for 30 years, and rebuilding his family home together.

“I’m learning as a man, especially as a Black man and a father, and growing up in Chicago, we learn to throw each other away and as we throw each other away, we throw away our relationships, we throw away our family and we hurt our children,” he told social workers on the Zoom call. “So, what I pray is that after I speak, if one thing can be accomplished, I would like at least one person to forgive, and that begins with forgiving ourselves.”

Rhymefest explained after a long time on the road touring, the mother of his child didn’t allow him to see his daughter because he didn’t pay enough child support. In response, the rapper admitted he withheld more money because he felt his daughter was unfairly being held for ransom and consequently, he saw her less.

“When I forgave myself for treating the mother the way I did, I was able to just pay what needed to be paid for the child, whether I saw the child or not.” According to Rhymefest, ”Forgiveness comes in increments of our efforts. The more I didn’t ask for anything and did what I was supposed to do for the child; the less I fought, the less I resisted, the more access I began to have because there was no argument.”

He said men often can’t shed feeling aggrieved, but he said justice is not something that can be taken, it has to be earned. Recalling how he forgave his father for abandoning him after he was born, he said witnessing that helped his own children forgive him.

“We can fight in court, we can get the laws on our side, but unless we truly heal ourselves and our families, our children won’t grow into who we desire them to be … and that’s better than we were,” he concluded.

One-time mayoral candidate and state Rep. LaShawn Ford from Chicago’s West Side has pushed for so called “shared responsibility” legislation. It requires family court judges to begin custody decisions with the presumption that 50-50 shared custody is best and that both parents are presumed to be “fit” unless there is “clear and convincing evidence that parent’s exercise of parenting time would seriously endanger the child’s physical, mental, moral, or emotional health.”

Critics, including women’s rights groups and some legal associations, say stricter laws will roll back important protections against abusive or controlling former spouses and take discretion away from judges who are tasked with deciding what is in the best interest of children. They fear it could also negatively impact child support.

The lawmaker and former Responsible Fatherhood Council member has also sponsored legislation to eliminate the 9% interest on any unpaid child support starting 30 days after a parent fails to make a monthly payment. The Council’s Leving says there is a case in Illinois in which a father was still paying child support for children who were 40 years old because the interest continued accruing.

Ford stressed he hopes the pandemic does not sideline reform efforts by the Council for Responsible Fatherhood and he read a letter of support of the symposium from Gov. JB Pritzker.

Attorney Jim Hagler, a board member of the Fatherhood Educational Institute, advocates for virtual visitation in Illinois prisons to provide a critically important bond between father and child. Hagler explains Chicago-area men are incarcerated in Illinois prisons that are, in many cases, hundreds of miles away and a trip to visit is long, expensive and in many cases presents too big of a hurdle for custodial parents to bring children.

Hagler argues the lack of contact ultimately hurts recidivism once the inmate is released.

“The offender feels isolated, worthless, forgets his family, is depressed and remains disconnected. How can we make this offender when he’s released want to be a responsible father and get a job?”

Hagler says it’s an idea whose time has come, particularly now when everyone has adjusted to virtual visits. He envisions the need for a Chicago-based center, staffed with social workers who would help families connect and who could intervene, if necessary, to stop inappropriate conversations or to help direct communication.

There could be props and books on both sides of the camera to help fathers read to and interact with their children. Hagler been talking with lawmakers such as U.S. Rep. Jesús Garcia, a Democrat from Chicago, who say it’s doable but it is just a matter of political will. Garcia is seen in a Facebook video interview telling Hagler that video visitation is already happening in places such as the Kankakee County Jail where Immigration and Customs Enforcement (ICE) is paying the county to hold suspected illegal immigrants. Garcia explained the inmates are given a tablet that allows for a video visit with their family.

The Illinois DOC also partners with a company called Global Tel*Link (GTL) to provide video visitation services at the Decatur Correctional Center, a women’s prison. Inmates are allowed one video visit a day and nor more than two a week. But Hagler says the challenge will be to convince DOC administrators or lawmakers it’s worth investing money to expand the program, especially for prisoners with shorter sentences who need strong family connections to stay focused on getting a job and supporting their loved ones once they’re released.

“It does work and it will work and some of these prisoners will be so excited to be connected with their children,” Hagler said of the effort that is in the early planning stages and has no legislative sponsor.

There’s no subscription fee to listen or read our stories. Everyone can access this essential public service thanks to community support. Donate now, and help fund your public media.

2020-10-25
Previous Post: Treating the causes of homelessness with fresh solutions – Redlands Daily Facts
Next Post: National ACLU has issued report calling for the decriminalization of prostitution