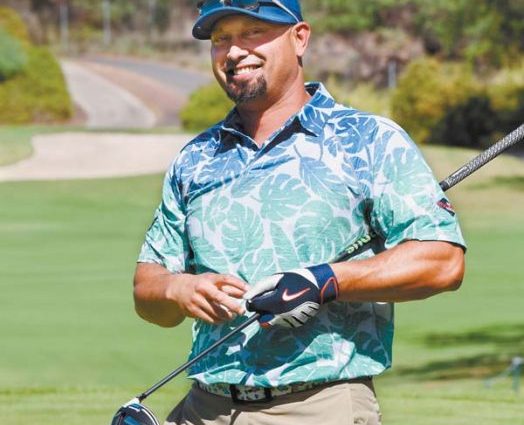 AOY Rewind is a special series of stories catching up with a handful of past Maui News Athletes of the Year. Stories ran periodically throughout the fall in The Maui News.

WAILEA — Shane Victorino took another step on his lifelong baseball journey earlier this month when he was notified that he was placed on the Baseball Hall of Fame ballot for the first time.

He knew the career he put up over 12 major league seasons — two World Series titles, four Gold Gloves, two All-Star selections –would make him a candidate to be placed on the ballot, but when word came, it was special for the 1999 St. Anthony High School graduate.

“I knew my time was coming — I think it’s five years after you retire or your last Major League Baseball game — and there’s obviously criteria that goes with it for you to be in that position,” Victorino said before he teed off in the 13th annual Shane Victorino Celebrity Golf Classic at the Wailea Gold Course last Saturday. “You know, did I feel like I had the opportunity or the chance to be on it? Yes, but you never know until you actually have that come out and it’s presented.”

The Phillies’ Shane Victorino celebrates his tying two-run homer in the eighth inning of Game 4 of the National League Championship Series on Oct. 13, 2008. Philadelphia won the game 7-5 before closing out the Dodgers 4-1 in the series. The Phillies went on to beat Tampa Bay 4-1 in the World Series. — AP file photo

It is another milestone in a career filled with them.

“Your friends and family send it your way and you know and you start (pinching) yourself because it’s that moment as a little boy, not only just playing the game of baseball, but to sit and be able to be on a ballot with what people consider the greatest to ever play the game or that caliber,” Victorino said. “It does mean a lot.”

The notification brought back memories of one of the greatest prep careers in the history of the Maui Interscholastic League, where he excelled in football, soccer, track and field, and of course, baseball.

He was named The Maui News MIL Boy Athlete of the Year in 1999 soon after winning the 100-, 200- and 400-meter state titles in track. Soon after that he was drafted in the sixth round of the MLB draft by the Los Angeles Dodgers. He turned down a late football scholarship offer from University of Hawaii head coach June Jones to sign with the Dodgers.

“It is definitely one of my more humbling moments, you know, because I guess the journey that I went on,” Victorino said. “To be able to be on that ballot is what I reminisced on — all those great memories coming back. Do I wish I played 15 to 20 years? Yeah, but in my short 11-plus years over 13 seasons, I reached a lot of milestones as a Hawaii-born baseball player. That’s the kind of thing I look at now and think that’s the kind of stuff I look at now and hope that some other Hawaii kids are on that ballot.”

While Victorino probably won’t reach the required 75 percent of ballots to be elected to the Hall of Fame, he could pass Charlie Hough (four votes in 2000), Sid Fernandez (two votes in 2003) and Ron Darling (one vote in 2001) for the most HOF votes ever garnered by a Hawaii-born player.

“At least I can say when it’s all said and done that my name was on the Hall of Fame ballot,” Victorino said. “You know, it’s not about the milestones as an individual for me, it’s the things that I can look upon and go, ‘There’s a lot to guys in the Hall of Fame who don’t have something that I have and that’s two World Series rings, let alone one.’

“So, I always try to remind myself that as an individual, yes, you want to reach these kind of milestones, but as a team I was able to reach that pinnacle twice.”

His name is synonymous with success at St. Anthony. Current Trojans baseball coach Lionel Montalvo has recently moved into a dual role as interim athletic director at the tiny Wailuku private school.

The current Trojans baseball players know who Victorino is “because we remind (them) of that every day, every chance we get how your dedication and hard work will pay off in the end,” Montalvo said. “Because it’s unnecessary where you came from, it’s what you make for yourself and how you capitalize on the opportunities as they present themselves.”

Montalvo remembers when Victorino was twice picked in the Rule V draft — a selection process for players who are not on 40-man rosters where other MLB organizations can pick a player and place them on the big league roster.

“Timing has a lot to do with it and Shane would be a good example of that,” Montalvo said. “Being drafted out of high school, going to the Dodgers, they had an idea of what they wanted. Things didn’t work out there, but because of the timing and circumstance, his dedication and belief in himself, it was a blessing that he got picked up.”

Victorino is focused now on the young Hawaii players he may have motivated in the past.

“I think that’s my biggest thing now, to sit back and watch Isiah Kiner-Falefa, Kolten Wong, the Kean Wongs, the KJ Harrisons, the Shane Sasakis, and that next generation of kids that are getting an opportunity,” Victorino said. “Kurt Suzuki is still out there doing his thing. I think that’s the part for me, Kurt and I can go sit down when we’re done with our careers … we can honestly say, ‘Two little boys who grew up in a little town in Wailuku’ and we could arguably be among the best baseball players this state has ever seen.”

Suzuki is a catcher out of Baldwin who has passed Victorino’s standards for Hawaii-born MLB players in hits, home runs and RBIs.

“That’s the humbling part for me, but to have someone else like Kurt go on and do things, win the World Series, and continue to set the standards for hits and home runs and all these milestones that he’s reaching,” Victorino said. “I don’t care where I end up, but just the fact that I was there and gave back and had that chance to look at that. That’s what is important to me.”

The Shane Victorino Foundation has been impactful in its philanthropic work in Philadelphia, Las Vegas and Maui. The new benefactor of this year’s golf event and dinner gala was Project Hawaii, which will use the proceeds to launch its Maui operation to help homeless children — Project Hawaii has similar efforts already established on the Big Island and Oahu.

The protocols necessary to hold the events under COVID-19 restrictions were daunting to meet, Victorino said, despite the fact that his father Michael is the Maui County Mayor.

* Robert Collias is at rcollias@mauinews.com

Today’s breaking news and more in your inbox


* EDITOR’S NOTE: The Sports Bulletin Board is published in the Weekender. Mail or bring material to The Maui …

2020-11-28
Previous Post: The Ms. Q&A: Actor-Activist Vanessa Marano on Shifting the Trafficking Narrative to Survivors
Next Post: Sex trafficking arrests made after 14-year-old’s plea to mom: ‘I don’t want to be here anymore’