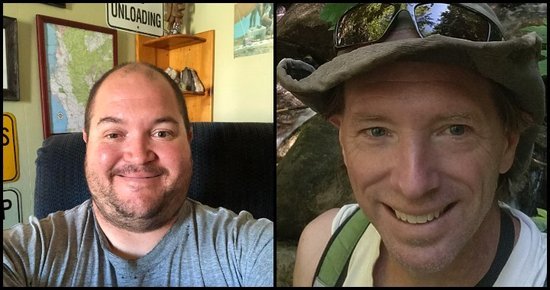 The two candidates for the Area 4 seat on Arcata School
District’s board of trustees are running casual campaigns.
Incumbent Joe McKinzie, who previously worked as a classified
professional for several local schools, runs for the sake of
community and public education. Challenger Brian Hudgens, an
ecologist, feels his expertise could benefit the district as it
navigates COVID-19 reopening plans.

The
ASD school board oversees 500 students and two schools — Arcata
Elementary and Sunny Brae Middle. Four charter schools — Coastal
Grove, Redwood Coast Montessori, Union Street and Fuente Nueva — are
also part of the district, but they each have independent governance.

The
Area 4 seat represents a large sector of southern Arcata and
downtown. This is the first year ASD is doing trustee-area elections,
which were adopted because of a settlement relating to the California
Voting Rights Act. More on that later. For now, LoCO presents
McKinzie and Hudgens, two Arcata citizens vying to represent citizens
in Area 4.

McKinzie,
who was previously the classified union president at Northern
Humboldt Union High School District, mentioned a few times during a
phone call with the Outpost that he’d like to see ASD become
more of a “public hub” for the community. “Kind of like a small
entity of what the county is doing,” McKinzie said. For instance,
expanding the gardens at each site and using the produce in ASD
kitchens would be one way to serve the community, McKinzie said, but
he noted that it would require introducing a new position to farm
successfully.

Between
keeping staff on board while maintaining fair wages and covering
medical costs, “the number one challenge is funding,” McKinzie
said. On top of that, it’s hard to keep every program afloat. “Not
only reading, writing, arithmetic and everything — you need the arts
too. So it’s hard to sometimes justify that when you’re just trying
to get by,” he said. To navigate budget cuts, McKinzie said he
always returns to what is best for students. “They’re your number
one product, they’re the ones that will suffer the most from all of
this.”

McKinzie
first joined the board to learn more about public school governance.
Since then, he’s observed difficulties that arise with having
several small school districts. “Unification of the school
districts is kind of on the radar for me,” he said. Between boards,
finances, busing and food, there is a lot of repetitiveness, McKinzie
said, adding that merging Arcata’s many districts would benefit the
schools in terms of governance because there would be a larger pool
of trustee candidates to choose from. McKinzie cited his own entrance
to the ASD board — which he got by “default” because no one ran
against him — as evidence that unification would support the
democratic process that is meant to establish school boards. Right
now, many trustees find their way onto boards by appointment.

Though
McKinzie is interested in merging districts, he said he’s not sure
how it would be done.

In
terms of COVID, McKinzie is committed to distance learning, for the
time being. “That’s one thing I’m very happy that we’ve been kind
of ahead on,” he said. “My personal feeling on that is if the
school board members [are] not meeting in person, we shouldn’t be
sending students and teachers back into it.”

Following
COVID, McKinzie said he foresees implementing an enrichment program
to help students rebound from pandemic-era learning. “Even with
quality, excellent stuff from the teachers, there’s going to be
students who are going to be behind where they should be,” he said.
Regardless of whether schools are in-person or virtual, the number of
required instructional minutes were reduced for the 2020-2021 school
year, thanks to California
Senate Bill 98. Grades 1 to 3 dropped from 280 to 230
minutes and grades 4 to 8 went from 300 to 240 minutes. McKinzie
thinks that young students in particular will need extra support in
reading, phonics and mathematics coming out of COVID.

Hudgens
has written epidemic response plans for endangered wildlife species
in the past, and feels his experience would benefit the district in
terms of developing reopening plans. He has a daughter in the
district, and said he’d like to see a “very transparent process
in place and steps in place” as related to reopening.

“Right
now it kind of feels like we’re making a decision moment by moment,
and it’s not clear what the criteria are for going one way or
another,” he said. The district has sent surveys out to assess the
needs and desires of families, but Hudgens wants more clarity
regarding how those survey results are being used, and is an advocate
for more community involvement in the decision making process.

Hudgens
said he would like ASD to adopt a hybrid learning format, with small
groups of kids going to campus for in-person instruction. However, he
also stressed that he doesn’t want to dictate that choice, but
rather “help facilitate making sure all voices are heard.”

Though
the schools are teaching virtually, the district has also been
running a camp program since June. The on-site program at Arcata
Elementary serves about 50 students — mostly elementary students —
who are separated into pods of ten. It runs from 7:30-5:30 on
weekdays, and provides a space for students of families with varying
needs. Foster and homeless students have priority, as well as
children of employees who are running the program. Classified staff
facilitate the students, maintain social distancing and ensure that
everyone wears a mask. The district has also started to provide
in-person extra support to students with disabilities at the Sunny
Brae campus.

“The
camp program seems to be tremendously successful,” Biesecker said.
“We’re getting a lot of positive feedback from our
community.”Biesecker added that there is a waiting list of more
families who want in on the program, and that the board is discussing
ways to expand it.

Hudgens
primarily focused on streamlining communication between the district
and families in terms of COVID decisions during his interview with
the Outpost, but followed up with additional goals in an
email.

To
address equity during virtual learning, Hudgens suggested staggering
class schedules between different grades so that families with a few
kids in the district will have less strain on their internet
connection.

He
also indicated that as a board member he would promote a diverse
staff, especially at the middle school. “Kids are becoming more
aware of who they are, and thinking about how they ‘fit in,’”
Hudgens wrote. “Having a diverse faculty and school leadership
makes it more likely that those kids who need a trusted adult to
connect with will find someone who they feel understands them.”

2020-10-15
Previous Post: Children of trafficking victims worst hit by COVID situation
Next Post: QAnon’s Obsession With #SaveTheChildren Is Making It Harder To Save Kids From Traffickers