At some Atlanta schools, the pandemic has provided a silver lining—a stronger, more urgent sense of community 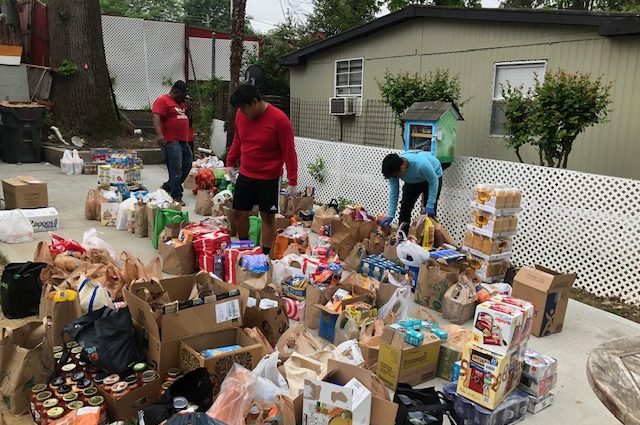 On March 12, Atlanta Public Schools’ announced that its buildings would close to students and staff for a minimum of two weeks. The following day, the 13th, Michelle Ampong received a call asking her to come to her children’s school, Parkside Elementary, in Grant Park. (The school that, full disclosure, my children also attend.) School staff had just one day to distribute all available devices to kids to take home, but many students were missing the necessary permission slips.

Ampong, who’d been helping the school reach out to families living at Trestletree Village Apartments, a low-income family housing complex, joined a small group of other parents and staff. Crammed into an office, they spent the whole day calling and texting families.

“I was telling people, ‘We’ll drive to your job so you can sign it. Your kid needs this device in order for their education to continue.’” After eight hours, “every kid got their permission slip signed,  and every device got to leave the school.”

The group was relieved, but as they began to walk back to their cars, they started thinking: Now what? Parkside is a Title 1 elementary school, meaning the majority of students qualify for free and reduced lunch. How would those kids get fed now? What about families with other needs—diapers, cleaning supplies, internet access? Who would look out for them?

It’s a question that many school communities have been asking since the beginning of the Covid-19 pandemic. Even as districts like APS worked to figure out how to distribute food and technology to families, the complicated logistics meant that plenty of students were falling through the cracks. The pandemic has also exposed and worsened existing inequities, disproportionately affecting Black families and forcing many households to confront both a health crisis and an economic crisis.

Kimberly Dukes, a mother of 10, including eight students in Atlanta Public Schools, is a longtime resident of Thomasville Heights and the founder of Atlanta Thrive, a parent advocacy group. After schools closed in the spring, Atlanta Thrive surveyed over 400 parents about their concerns. A big one was self-care, she says.

“Families are in survival mode. They’re worried about their bills. A lot of people are frontline workers. A lot of kids have never had a computer to use, only a smartphone,” she says. “I get calls late at night from parents who need help.”

In June, RedefinED Atlanta, a nonprofit focused on high-quality public education, chose Atlanta Thrive as one of two groups to administer $100,000 in Covid-19 funds to Atlanta Public Schools’ families. In three hours, over 350 parents applied for help with rent, bills, and other urgent needs. “I think we were able to help 174 families and the majority of those came from the Thomasville Heights community,” says Dukes.

Dukes says that the pandemic has exposed more privileged families to the destabilizing effects of poverty. “Low income people, people living in poverty, we’ve been going through this. Once it happened to everybody else—when suddenly they were threatened with losing something—it’s an eye opener.”

Within the affluent neighborhoods served by the North Atlanta High School cluster, poverty has long been hidden in plain sight, says Michelle Martin. Last year, Martin was room mom for her son’s fifth-grade class at E. Rivers Elementary in Peachtree Hills. A couple of weeks after school closed, she received a call from his teacher.

“He never called me during the school day, but he was almost in tears,” she says. “He said, ‘Michelle, I don’t know what to do or who to call, but we have a community that’s in real trouble. The parents have lost their jobs, they can’t afford to buy groceries, they don’t have computers or internet.’ He told me, ‘I haven’t been this scared in a long time.’”

Martin knew the community that the teacher was referring to, Central Village Mobile Home Park, because her kids played soccer with some of the students who lived there. That phone call was the catalyst for Operation Feed, which has raised more than $30,000 to support hundreds of mostly Latino families with groceries, baby items, and household supplies since April.

“If a parent or teacher or child asks, we try to find a solution,” Martin says. “We’ve assisted with virtual learning or childcare. I’ve had a couple of doctors help look at Covid cases during their free time. Right before school started in the fall, we got tablets from the school and a whole bunch of Spanish-speaking volunteers and we offered socially distant help with signing up for free lunches, getting the kids online, getting hotspots.”

Jasmine Martinez, 18, started volunteering with Operation Feed last spring during her senior year at North Atlanta High School. She lives in Central Village, and says the group has “allowed people to breathe.”

She also says “it’s been helpful for my voice to be in there directing what they’re doing. Explaining what to remove from a grocery list and what to add. They know I’m from the community and I have more insight into what people want and need.”

At other schools, the pandemic has provided an opportunity to expand existing programs to assist families. Pre-Covid, parents and staff at Maynard Jackson High School in Grant Park had established a “sunshine closet” to provide food, hygiene products, school supplies, and uniforms to students who were homeless or at risk of homelessness. In March, when word went out that the school was shutting down, “we emptied out the closet for our vulnerable students,” says Kelly Hartley, a parent who oversees the closet. “Initially we thought that would be for two weeks. Then we didn’t go back.”

Through their relationship with the school’s social worker, the parent-led student support team knew that food insecurity and a lack of access to reliable transportation were major issues for many students, not just those who were homeless.

“A lot of our families have an elderly relative as caregiver and no car,” says Beth Wells, a parent who helps run the student support team. Working with members of the community, the group arranged to pick up food at APS distribution sites and deliver it to families; they also put together additional food and hygiene supply boxes every two weeks.

“Though our efforts redoubled for the pandemic, it was a natural outgrowth of what we were already doing as a school,” says Wells. “With the great economic divide that we have in these schools, I think people now more than ever are willing to pay someone’s Georgia Power bill or buy them groceries.”

Linda Brenner, who oversees a similar program at Grady High School in Midtown called Grady Cares, agrees, noting that the pandemic has produced a flood of families wanting to help.

“We’re trying to mobilize a community of people who have more than they need to directly connect with people nearby who don’t have enough,” she says. “What I want to do is build the avenues for sharing these resources.”

A few miles outside of Atlanta in North Decatur, the International Community School is a charter school designed to serve refugee children and recent immigrants. In January, the school had opened a community resource center to provide health and social services and educational workshops, but when students and parents dispersed, they weren’t sure how families would access them. Many parents also didn’t speak or read English, which made communication challenging.

One of the first things the school did was survey families about their needs and concerns, says Marinella Taoushiani, the school’s director of development, and they’ve sent out new surveys every six weeks. Families who don’t fill it out receive a phone call, and if necessary, staff dial into a service to provide translation on the spot.

To address the most urgent needs, the school started a Covid-19 relief fund and appealed to families and nonprofits in the community. As a charter school, ICS was on its own when it came to providing devices for students. A high percentage of families didn’t have computers at home, so one of the biggest priorities was securing laptops and hotspots. Many families were also food insecure. Parents stepped up to buy groceries and have them delivered via Instacart, and the school plans to open its own food co-op as a more sustainable option.

“Privileged families didn’t always understand all the services we offered through the community center, but now they do, and they see ways that they can help bring their own skills and resources to the table,” says Taoushiani.

The weekend after school shut down, the initial team of Parkside parents and staff decided to stop assuming what families needed and start asking them. “We created a script and asked teachers to call every student’s family,” says Ampong. “It was a lot of checking in with people: Do you need food? Do you have internet yet? What’s going on?”

“We don’t want to make plans without including people who are disproportionately impacted, or else we’re not going to understand and meet their real needs,” says Allison Glass, another parent who has helped lead the group’s work.

They set up an online fundraiser, eventually bringing in more than $14,000, and a Google Voice number for parents to contact if they needed assistance. As the weeks ticked by, more parents joined, with eventually 200 families either giving or receiving aid. Over the summer, the group decided to formalize their work with the creation of the Parkside Community Equity Coalition, and branch out to provide voter registration help and antiracism training for parents and advocate for families at risk of eviction. Relationships are the backbone of the group’s work, says Ampong.

“[With] school being closed and not being able to have guaranteed community for your children, it drives people to build their village,” says Ampong. “We need to invest in our communities for times like this. Hopefully we will all come back to an even stronger, more welcoming school in the end.”