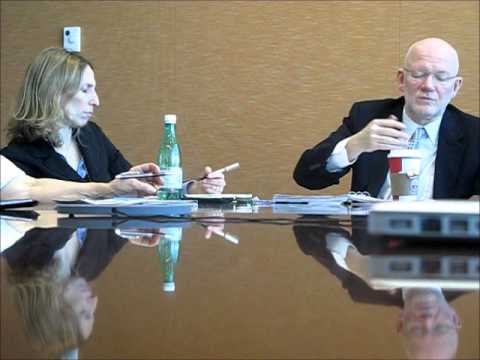 UNITED NATIONS, February 28 — Earlier this year, following an investigation into 38 Chadian children harmed by a meningitis vaccination campaign done wrong, questions were raised about the Bill and Melinda Gates Foundation that were, at that time, not answered.

Chad’s Health Minister Mamouth Nahor NGawara said diplomatically that “during the last phase of the vaccination campaign organized at Gouro on December 11 to 15, 2012, unusual reactions were noted.”

Unusual to say the least: seven children were taken out of the country for treatment in Tunisia.

The question was raised: “What part does the Bill and Melinda Gates Foundation (BMGF) play within the campaign? Who is responsible for administering the funds provided by the BMGF?”

With no answered, when the UN Department of Public Information sent out invitations to a February 28 briefing by Dr. Chris Elias, President of the Bill & Melinda Gates Foundations’ Global Development Program, Inner City Press signed up.

Even though subsequently a UN Security Council meeting about Mali got scheduled at the same time, Inner City Press left covering it and went up to a glassed-in conference room in the UN’s renovated headquarters building.

A number of Bill & Melinda Gates Foundation staffers accompanied Chris Elias, who spoke for example about an upcoming event in the United Arab Emirates which he said Secretary General Ban Ki-moon will attend, to praise donations from the UAE.

(Earlier this week when Ban was in the UAE, Inner City Press asked Ban’s spokesman if Ban was aware of the UAE blocking entry by an academic to speak at a London School of Economics sponsored conference about Bahrain, because of the professor’s views.

The spokesman said Ban was aware of it, but there is no indication that Ban raised it in his meetings with the UAE ruling family.)

When UN Department of Public Information official Stephane Dujarric called on Inner City Press to ask a question at this on the record briefing, Inner City Press asked about the vaccination problems in Chad.

BMGF’s Dr. Elias replied that he was aware of the meningitis vaccination campaign in Chad (and twenty other countries in the Meningitis Belt), but said he was not aware of this case.

Off camera a staffer said he was aware, that some “government” action led to illness and promised to send more information to Inner City Press, which gave the staffer all the contact information.

The UN’s recent dismissal of the legal claim it brought cholera into Haiti, killing 8000 people, leaves the UN with little credibility as a defender of any people made sick. In this situation, which side do you think the UN is on?

An honest UN official, John Ging, this week told Inner City Press that the claim dismissal harms the UN’s “corporate reputation.” This is a small example of how. There will be many more.

BMGF’s Dr. Elias mentioned the “Path” program. But among the questions raised has been whether “Is the way in which PATH Intl. still promotes the campaign to solicit funds without reflecting on the recent happenings still helpful?”

These questions should be answered. This is called reporting. Watch this site.

Footnote: Recently UN DPI has set up on the record “brown bag” sessions with, for example, the UN’s expert on the prevention of genocide (about Syria), the now gone head of UN Security, a UNHCR official (about Syria, all on the record and helpful.)

The February 27 session felt different, perhaps because a non-UN entity flush with cash was allowed, essentially, to advertise. On February 22, UNCA (a/k/a the UN’s Censorship Alliance) similarly ran a “press conference” which devolved into an advertisement for the German car company BMW. See

There, questions about environmental impact were referred to BMW. Will these questions be answered? Watch this site.