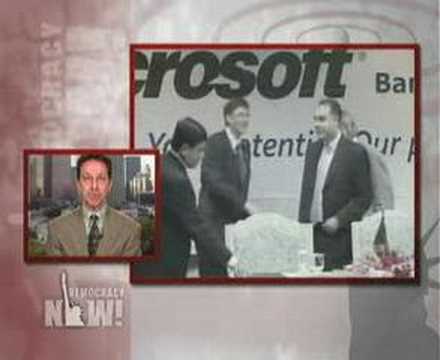 Democracy Now with Amy Goodman The War on Peace Report:

The Los Angeles Times has revealed the Bill and Melinda Gates Foundation has made millions of dollars each year from companies blamed for many of the same social and health problems the Foundation seeks to address. We speak with the lead reporter on the LA Times investigative team that broke the story.
the LA Times investigation reveals the Gates Foundation’s humanitarian concerns are not reflected in how it invests its money. In the Niger Delta — where the Foundation funds programs to fight polio and measles – the Foundation has also invested more than $400 million dollars in companies including Royal Dutch Shell, Exxon Mobil Corp, and Chevron. These oil firms have been responsible for much of the pollution many blame for respiratory problems and other afflictions among the local population.

The Gates Foundation also has investments in sixty-nine of the worst polluting companies in the US and Canada, including Dow Chemical. It holds stakes in pharmaceutical companies whose drugs cost far beyond what most AIDS patients around the world can afford. Other companies in the Foundation’s portfolio have been accused of transgressions including forcing thousands of people to lose their homes; supporting child labor; and defrauding and neglecting patients in need of medical care.

Overall, the LA Times says nearly $9 billion in Gates Foundation money is tied up in companies whose practices run counter to the foundation’s charitable goals and social mission. And that number may be understated – the Gates Foundation has not provided details on more than four billion dollars in investments it says are loans.

Charles Piller, the lead reporter on the Los Angeles Times investigative team that broke this story. He joins us from Los Angeles.

Find out more here on my blog: