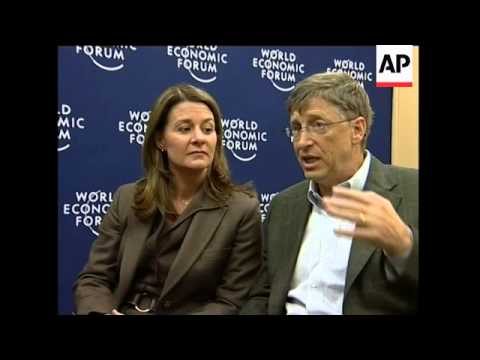 (30 Jan 2009)
1. Wide of Microsoft founder, Bill Gates and his wife, Melinda Gates speaking to reporter
2. Mid of Bill and Melinda Gates
3. Close-up of monogram on Bill Gates’ shirt
4. SOUDNBITE: (English) Bill Gates, Founder of Microsoft:
“No one knows how long the crisis is going to last. I say in my letter that I feel pretty confident that if you look out five or 10 years we’ll be back on a very strong, positive economic growth track, but that still leaves a number of years here where things are going to be tumultuous, and the world should feel good if it’s able to maintain the needs of the poorest during this time when resource trade-offs are tougher than ever.”
5. Mid side shot of Bill Gates
6. SOUDNBITE: (English) Bill Gates, Founder of Microsoft:
“President Obama’s stimulus plan has some good money in it for education. They’ve actually hired some of the people who worked at the foundation, so we’ll have some good collaboration there. He’s talked about his interest in these foreign aid issues and so we’re hopeful that the US will set a good example of staying strong even during tough times.”
7. Mid of Bill and Melinda Gates
STORYLINE:
Bill and Melinda Gates said on Friday that investment to improve health and development in poor countries must be maintained, especially during the global financial crisis.
The founder of Microsoft and his wife said they came to the World Economic Forum in Davos, Switzerland, with the goal of keeping up the effort to improve the lot of the world’s poorest people.
The couple said their Bill and Melinda Gates Foundation is giving a 34 (m) million US dollar grant to a network fighting diseases that afflict the world’s poor.
Gates, the co-founder of Microsoft, said this year’s meeting was the first time he had come to Davos to work exclusively on concerns of the foundation.
He said he now is working full-time at the foundation.
He stepped down as CEO in 2000 and remains the software giant’s chairman.
Earlier this week, Gates said the Bill and Melinda Gates Foundation would increase the share of assets it’s giving away, even though the assets lost 20 percent of their value last year.
Gates praised US President Barack Obama’s economic stimulus plan and said it had a good percentage of funds for education.