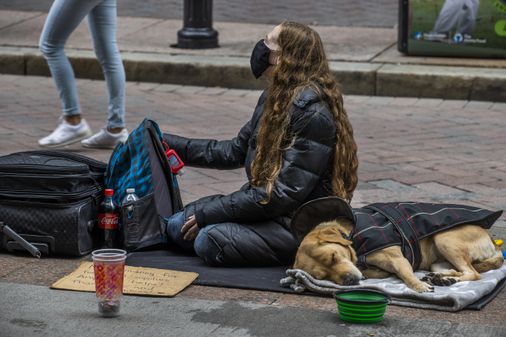 Before the coronavirus pandemic induced an economic collapse, Massachusetts was already facing a serious crisis: The state had experienced the largest percentage increase in family homelessness in the country since 2007 — a problem that the pandemic has only threatened to make worse. Now, the Boston City Council is planning on forming a special commission to reverse that trend, promising to end family homelessness in the city within five years. But while the Council’s commission is an earnest and much-needed endeavor, the city can only go so far in fixing what is ultimately a statewide problem. That’s why in addition to the council voting to create the commission — which seems likely to happen — the state should begin to lay the groundwork for a comparable operation.

The crisis of homelessness is often invisible to those not directly experiencing it. That’s in part because Massachusetts is the only state with a right-to-shelter law, which means that the state provides housing to people experiencing homelessness. (There are some conditions, however, and to be eligible for state-provided housing, someone has to prove that their homelessness was caused by something like a no-fault eviction or a natural disaster.) So while Massachusetts might not have obvious signs of its ever-worsening crisis because many of those afflicted by it are temporarily housed, it doesn’t mean that it’s under control. “In Boston, we have 125 schools. Every school in the city — every school in the city — has students who are experiencing homelessness,” said City Councilor Annissa Essabi-George, who has led the push for a special commission.

There are, on average, 3,400 families who find themselves homeless every night in Massachusetts, which is equal to about 12,000 people. And, according to the White House-led US Interagency Council on Homelessness, the total homeless population in the state on any given day is over 18,000. Most concerning is the number of students and unaccompanied minors who experience homelessness: Over 23,000 students reported being homeless at some point during the 2017-2018 school year. This is especially alarming because homelessness stunts students’ social and academic development, hinders their mental and physical health, and puts them at greater risk of getting entangled in the criminal justice system.

That’s why it’s crucial that governments act to prevent people from facing homelessness. The city’s proposed commission would attempt to do that by first measuring the cost that the homelessness crisis imposes on the city and by studying the gaps in the resources that homeless families have available to them. It would then release a comprehensive plan, based on its analysis and findings, for the city to implement.

One reason the commission would be a step in the right direction is that the homelessness crisis requires a coordinated effort by local, state, and federal agencies. “One of the greater challenges [for Boston] has been coordinating services with the state, because most of the work around family homelessness — the systems and the infrastructure that are in place when a family becomes homeless — is within the state,” Essabi-George said. “This commission would rely on state partnership.”

Indeed, the current language in the legislation before the council ensures that the commission is made up of stakeholders from both the city and state. It would include members such as the mayor, the governor, and the secretaries of Health and Human Services and the Department of Housing and Community Development, among others.

But in the end, the commission can only go so far. While it would have an administrator to ensure that the city does the work that needs to get done, it is easy to imagine the administrator or the commission as a whole becoming the scapegoat if no progress is made. That’s why it is incumbent on the mayor and the council to commit themselves to managing this crisis. Residents should ultimately hold the city’s political leaders accountable for making measurable progress in reducing the number of families who are homeless and the growth rate of homelessness.

With the pandemic ongoing, the economy stumbling, and evictions looming, both the City of Boston and the Commonwealth need a targeted effort to finally bring an end to homelessness. While the vote to form the commission is not yet scheduled, Essaibi-George anticipates that the council will pass her legislation early next month. The work that awaits the commission may seem insurmountable. But if the council, the mayor, and the governor take this crisis seriously and prioritize the commission’s work, then they may actually succeed.