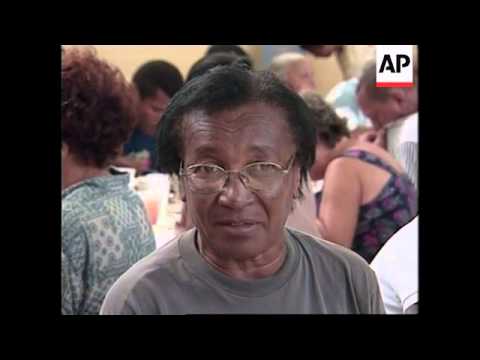 The restaurant is inspired and named after the sociologist and political activist, Herbert de Souza, otherwise known as Betinho, renowned for his work in fighting hunger in Brazil.

Providing nutritional meal’s for those who have little money, the new Betinho Popular Restaurant is a brief moment of social justice in a city where wealth and poverty exist antagonistically side by side.

Some 1 (m) million people pass through the century old station on their way to work and on their way back home.

Most of them are Rio’s poor – Central Station links Rio’s geographic and social margins with its city centre.

Results have been impressive.

After last week’s opening, an endless stream of Rio’s poor have waited patiently for their 1 Real meals.

The queues have been constant.

Paulo Roberto and his family came for the only meal they could afford all day- children eat for free.

SOUNDBITE: (Portuguese)
“I think that this restaurant is very important because with 2 reais – as my little children don’t pay – we are going to eat a lot. It’s good food and we also have the right to have a fruit juice in the end.”
SUPER CAPTION: Paulo Roberto Paulino da Silva, Unemployed

In the first six days the restaurant served 21- thousand and 53 meals.

The restaurant was named after Herbert de Souza, otherwise known as Betinho – Brazilian sociologist whose efforts to fight poverty have left an indelible mark.

One of his many initiatives was the Citizens Campaign Against Hunger and Misery and For Life, mobilising hundreds of thousands of volunteers in local committees to help feed the hungry.

For Iraci Santos Freitas this was an emotional encounter.

SOUNDBITE: (Portuguese)
“You see the first time that I came here, I cried. I cried a lot. I hid my tears. Also the second time that I came here, because, you see, only God can bless the person that idealized this project, “Betinho” and I wish God can bless also the person who put it in practice. You don’t know how hard it is to be poor. For us, one Real means a lot, a lot.”
SUPERCAPTION: Iraci Santos Freitas, Unemployed

45 people work here, 15 were homeless themselves.

SOUNDBITE: (Portuguese)
“I eat rice, beans, farofa (a type of couscous – traditional Brazilian food), some beef..If we didn’t have this place I would go to my school feeling hungry. Now, my school is not giving food for us during the break, there is a lack of food at my school.
Q: So, you are lucky that you have got one Real..
A: Yes, my mother gave it to me.”
SUPER CAPTION: Paulo Henrique dos Santos, 12 year old Student

The restaurant gives preference to pregnant women, to the blind, to the disabled.

The project is subsidised by the State Government of Rio de Janeiro, through Secretary of Social Action and Citizenship.

The project’s secretary Rosangela Matheus makes surprise visits to the restaurant, to check the quality of the services.