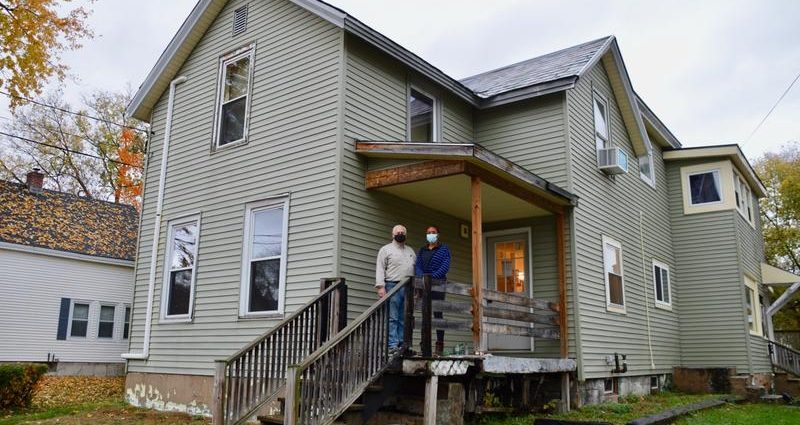 Millions of dollars from the federal CARES Act has helped Vermonters hurt by the pandemic with mortgage relief, renter subsidies and other assistance.  But in Rutland alone, the number of households seeking services for homelessness has tripled this year to more than 150.

Audio for this story will be posted.

On a recent Tuesday, Richard Daley stood in the driveway of the green two-story apartment house he’s renovating in Rutland. Before he bought the 90-year old property five years ago, it was heavily damaged by a fire that Daley says started near the front stairs.

“This is coming down,” he said pointing to the front stairway. “And we’re building a new set, and this right here, where you see the red markers, that’s where a new driveway’s gonna be.”

Daley renovated the upstairs three-bedroom apartment and a rear unit in the back of the building a few years ago. But the front, one-bedroom had remained unfinished until now.

Inside, Daley stepped over electric cords and around appliances waiting to be installed in the kitchen and described the new flooring he plans to put in. Then he walked into the living room which overlooks the street.

“So, we put all new windows in,” he said. “We’re sheet rocking as you see, and then we’re going to be putting in a new heating system.”

Daley was able to move ahead with this work because he qualified for a $30,000 federal grant. The money comes from pandemic relief funds Vermont received from the federal CARES Act.

Participating landlords could apply for up to $30,000 in funding per unit. But to get the money, they have to contribute at least 10% in matching funds. They have to prioritize improving safety, air quality and accessibility. They have to commit to charging a lower, federally-determined, fair market rent for five years and prioritize tenants who are homeless.  Local homeless prevention agencies will work with landlords on this aspect of the program once the units are ready.

The biggest hurdle: They have to do all this and have a qualified renter moved in by December.

“It’s a very tight timeline,” admits Melanie Paskevich, director of operations with Neighborworks of Western Vermont. Neighborworks is one of five nonprofit housing organizations in the state overseeing this effort.

Paskevich says Neighborworks partners with local landlords, makes sure all requirements are met and distributes the money.

“The program is to take vacant, blighted properties, you know, rental housing and apartments that have code issues or just have been vacant for a long time, to bring units online to rehouse low-income [tenants] and especially the homeless,” she said.

While the federal CARES money is what’s making this program possible, Paskevich says the requirement that it has to be spent by the end of the year has made it a lot more difficult.

Contractors and building materials are in short supply right now, and because of that, she says they weren’t sure how many landlords would be able to meet the challenge when they announced the grants in August. But she’s been blown away by the number of applicants.

“Yeah, for us, we originally said we’d, you know, repair and rehab and bring back on around 40 units,” Paskevich said. “And at this point time, we have 80 units in the pipeline.”

And that’s just in Rutland, Addison and Bennington counties.

Statewide, 230 units are expected to be upgraded through the program according to Shaun Gilpin, Housing Program Administrator for the Vermont Department of Housing and Community Development. And that’s important, he says, because Vermont has some of the oldest housing stock in the country.

According to U.S. Census data, two-thirds of the 80,000 rental properties in Vermont were built before 1980, and many before 1940.  That same data shows 10% of all rentals in Vermont are vacant and not on the market.

The census data doesn’t show why these units are vacant, but considering their age, deferred maintenance is likely a reason, and Gilpin said grant programs like this can make a small but important dent.

But he says grants for small landlords are equally crucial.

“What you’ll see is that all of … these generous resources are predicated on there being apartments to put people in,” Chaney said. “A subsidy is worth exactly zero if there isn’t an apartment that someone who’s homeless can rent.”

He added that the Homeless Prevention Center is working with 158 homeless households in Rutland County right now, triple the number a year ago. Most, Chaney says, are living in motels, and these new apartments will go a long way to help that.

All of these upgrades, housing advocates say, will have a positive ripple effect on surrounding neighborhoods. That’s the case on Clover Street in Rutland, where couple Ryan and Gabriela Walton are renovating a small single-family house that hasn’t been lived in for three or four years.

“It was in bad shape when we got it,” Ryan said.

He pointed to the green multi-family house next door, which is also undergoing renovation.

“That’s how I heard about this program,” he said. “The landlord who owns that house told me about the grants.”

More from VPR: Nonprofits Collaborate With State To Help Homeless Population During Pandemic

The timeline to finish by December was daunting, he said, and the Waltons had to think carefully about having to charge less rent for five years to meet the affordability rules.

But Ryan Walton said in the end, he and Gabriela felt the opportunity was too good to pass up. He recently walked through the front door, down a musty hallway and into a completely gutted kitchen where his wife was sweeping up old paint.

“It was going to take us over a year to get the money to do this,” he said. “But this program has, you know, enabled us to get it done so much quicker. And it’s really a blessing, and it’s going to be a blessing to the people who get to move in here.”

While landlords have to commit to spending 10% of their own money to qualify, Shaun Gilpin, of the Vermont Department of Housing and Community Development, says most of the grant recipients have invested much more into their properties.

Considering the interest and additional investment shown by landlords in this program, he said others are hopeful the state will fund similar incentives with more reasonable time frames in the future.

Have questions, comments or tips? Send us a message or get in touch with reporter Nina Keck @NinaPKeck.

We’ve closed our comments. Read about ways to get in touch here.