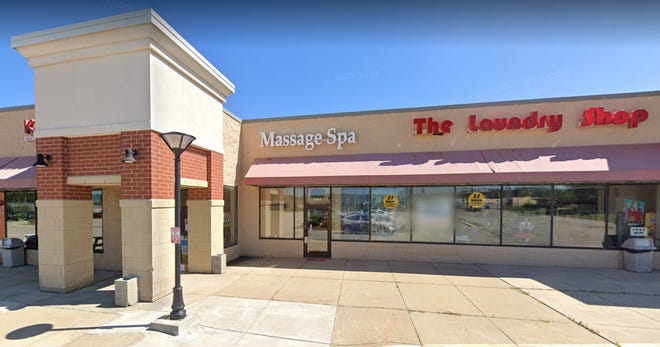 Human and sex trafficking operates in the shadows.

But make no mistake, it is happening in Bucks County.

Look no further, officials say, than strip-mall massage parlors with locked doors in the middle of the day, late overnight hours, cash exchanges in therapy rooms and customers who come and go through back doors, just to name a few worrying signs that raise red flags.

“It does. This modern-day slavery is able to thrive in these massage parlors under the front of a legitimate business, but that’s where forced sex work is occurring and unfair labor practices,” she said at the county commissioners’ meeting Wednesday.

In response, the commissioners Wednesday adopted an ordinance to regulate massage businesses countywide, becoming the first county government in Pennsylvania to have such a law of the books. They said the law is aimed at curtailing and eliminating illicit massage establishments that promote prostitution and sex trafficking.

More:Feds: Philly man trafficked four in Bucks and beyond. They say he ran his network for 2 years

A handful of Bucks County municipalities have their own ordinances, including Falls and Middletown. Bucks Commissioner Chairman Bob Harvie, a former Falls supervisor, said that town saw the benefits of having regulations in its efforts to stop illicit massage parlors from setting up shop.

“Governments have an obligation to serve and protect their residents,” Harvie said in an email after the meeting. “That’s true at every level of government. Exercising tighter controls over some businesses helps protect the workers in that business, potential customers and the community at large.”

Jackman, who previously prosecuted human trafficking cases in Bucks, said that officials have found “women suffering from some sort of addiction” sometimes turn to prostitution to feed their need and then come under the control of prostitution rings.

When this happens with a child younger than 18, it is not considered prostitution but human trafficking.

She also said that oftentimes people from foreign countries are brought to the United States but their passports are taken away and they are trafficked, frequently by rings that she said are established in New York. “They’re very difficult cases,” she said.

By stopping illicit massage businesses from opening, municipalities won’t have to use police resources to control them, Jackman said.

“When we work together, it (human trafficking) cannot thrive under our watch.  It will free up police.”

She said that a massage establishment that has late night hours or has its doors locked during the day could be suspect for illicit business. “There’s no reason for doors to be locked,” she said.

The county ordinance, passed during Human Trafficking Awareness Month, has several measures related to licensing and how massage businesses must maintain cleanliness and good lighting. It also prohibits anyone younger than 16 from being in a massage salon except with a parent or guardian.

It also sets the hours that massage parlors can operate as between 7 a.m. and 10 p.m.; requires customers to enter by a front door unless getting an exception from the Bucks Health Department; says an owner or manager must be on duty during business hours;  and makes the establishment maintain a list of clientele and services provided for not less than the 90 days after date of service. The charges for services must be stated clearly in business brochures and should not change.

Middletown Supervisor Chairman Michael Ksiazek said the ordinance his township adopted last fall followed a police investigation which he believed led to the closing of two illicit massage parlors in the township.

He said township officials realized these businesses were targeting municipalities where there were no laws to regulate massage services.

Marc Levitan, one of the owners of Essential Salons in Doylestown and Warrington, said he gives a “seal of approval” to the new ordinance.

Levitan called the new regulations “common sense industry practices that massage businesses should embrace … No legitimate massage business needs to be open at 3 a.m. or take cash payments in the therapy room.”

He also noted that the new regulations don’t go into effect for 180 days to give current operators time to make any changes.

A recent study by Heyrick Research in California showed that there are ways to help the public know if a massage business is legitimate, said Julie Dugery, co-chair of the Bucks Coalition Against Trafficking and a staff member of the Network of Victims Assistance (NOVA), a  nonprofit dedicated to helping victims of sexual assault and other crimes.

Massage establishments that may be illicit often are open through the night, or advertise on adult websites, the study shows.

The department’s phone number is 215-348-6060 or email consumerprotection@buckscounty.org.

2022-01-25
Previous Post: This Lady Just Solved Homelessness!
Next Post: Cute Homeless stray cats climbing on my lap are so hungry.