Charities call for bombing pause to allow aid into Afghanistan 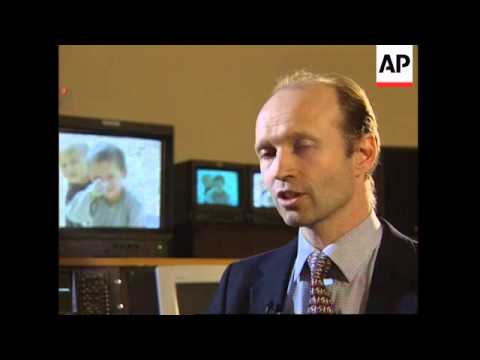 London, United Kingdom
1. Christian Aid Emergencies Co-ordinator, Anthony Morton King
2. SOUNDBITE: (English) Anthony Morton-King, Christian Aid Emergencies Co-ordinator, “It gets very cold, very quickly in the mountains – it will get to minus 20 degrees, minus 50 degrees in some places centigrade. Very, very cold and it snows and the snow is very thick and the combination of the two means certainly very large areas of Afghanistan are cut off. If we haven’t got food relief in by that time, it’s not going to get there. We can’t drop it out of aeroplanes there are simply not enough aeroplanes for us to to that with, it’s very expensive and it’s not sustainable so what we need to do is take it in by truck right now. We have about a month to do it and that’s why we are saying pause the bombing now, give us an opportunity to get the food in the time that’s available.”

Ramstein Air Base in Germany
3. Wide of US C-17 planes on
4. Wide of boxes of US aid being packaged
5. Various of military personnel boxing aid packages
6. Close up of Box pans to people packing

London, United Kingdom
7. SOUNDBITE: (English) Anthony Morton King, Christian Aid Emergencies Co-ordinator
“The air drops are wholly inadequate very simply there is no control over where these things will land. You are chucking them out of an aircraft at 15- 30,000 thousand feet, I dunno, and they will land scattered over a large area. There is only so close you can be to where you want then to land — so they could land miles from where you want them to be depending on the winds, depending on drift. You’ve got various problems that come with that, they may well land within military areas so soldiers will pick them up and that’s not what they are designed for. They may land on mine fields, this is something that is crucial. Only Angola has more mines than Afghanistan. It has a huge number of minefield and mines scattered most of them not marked on a map so you may have the situation where thousands of these things drop over a mine field, you get people wandering in, you get children chasing these bright yellow packets and get blown up.”

Ramstein Air Base in Germany
8. Various of aid boxes being loaded on to aeroplane

International aid organisations appealed on Wednesday for a pause in the bombing so they can rush food to Afghan civilians as winter approaches.

The window of opportunity to save lives is beginning to close, Christian Aid Emergencies Co-ordinator, Anthony Morton-King said.

If food is not distributed to certain regions before the snows begin many thousands of Afghans will be cut off from any help.

Despite 70,000 packets of food being dropped over Afghanistan overnight and more being prepared from U.S. Air Force Ramstein Air Base in Germany aid Christian Aid say that the air drops are ‘wholly inadequate due to the imprecise method of delivery’.

Morton-King highlighted the very real danger to civilians trying to retrieve food dropped on mine fields.

The C-17 planes have dropped a total of about 350,000 packets in the operation, which coincided with the start of U-S air strikes in Afghanistan.

Initial aid flights involved two planes, but that was increased to four in missions since Friday.

The packets contain foods such as barley stew, rice, shortbread cookies and peanut butter providing at least 2,200 calories, which are dropped out of boxes from the back of the cargo planes.

But they are only enough for one person for one day.