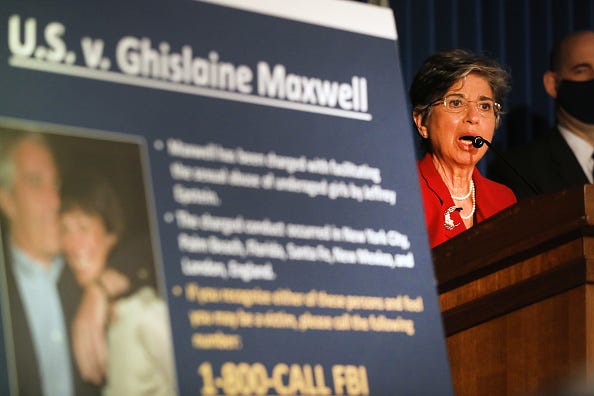 New details about Jeffrey Epstein coming from his girlfriend and person who groomed and provided him with underage girls are chilling. The new details have been released by US District Judge Loretta Preska as part of a cache of documents from a previously settled lawsuit against Epstein and his girlfriend/madam, Ghislaine Maxwell.

Thousands of pages of documents provide details of witness accounts of rape, threesomes, and handwritten notes exchanged between Epstein and Maxwell.

One document revealed that Maxwell organized a room of underage girls to “kiss, dance, and touch one another in a sexual way” in front of Epstein. Another witness described how a 15-year-old girl was “in utmost distress” after Maxwell “stole the young girl’s passport and tried to make her have sex with Epstein and then threatened her.”

One girl said that Maxwell “recruited her from her school campus to have sex with Epstein.” There is also documented evidence from witnesses telling of threesomes with Epstein, Maxwell, and an underage girl. A handwritten note from July 2004 shows that Maxwell cautioned Epstein that a girl was 14 and was “available.”

The testimony from the documents appears to confirm the repulsive sexual desires of Jeffrey Epstein. Former President Bill Clinton was allegedly on board Epstein’s plane that flew influential men and a group of underage girls to Epstein’s private Caribbean island. Former President Donald Trump was pictured with Epstein, but the evidence is not clear about his possible involvement. Prince Andrew, from the Royal Family, has refused to cooperate with authorities investigating the illegal sexual activity while the newly-released information shows Prince Andrew pictured with a teenage girl and Maxwell.

Ghislaine Maxwell is being held without bail because she is considered a flight risk. Maxwell is hoping for a plea deal in exchange for charges being dropped.

Jeffrey Epstein hanged himself in prison in August of 2019 while awaiting his sex-trafficking trial. Suicide was the official cause of Epstein’s death, but there is speculation from some that Epstein was killed because of the fear that he would reveal the names of the many rich and influential men that used him to have sex with underage girls.

Will Maxwell reveal the names Epstein was not able to reveal? Who might be on the list? And is the life of Ghislaine Maxwell in jeopardy?

Epstein and Maxwell are not the only villains in this saga. The rich, powerful men that created a market for sex with underage girls are also to blame. The sad reality is that rich, powerful men are willing to pay big bucks for this.

Coinciding with this is the role that QAnon believers play in politics. QAnon supporters also support President Trump, and the foundation of their belief system that justifies their existence is the false belief that Democrats and Hollywood elites are involved in a sophisticated sex trafficking ring involving children. They also believe that Democrats and Hollywood elites are Satanic pedophiles.

As much as society condemns and pursues sex traffickers, where is the push to reveal and arrest the men who create the demand?