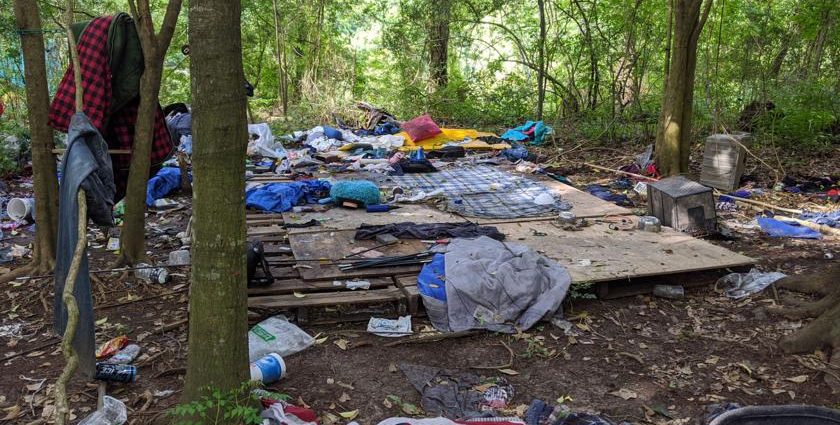 Mayor-President Sharon Weston Broome’s administration is hoping to address the city-parish’s homelessness plight through a set of goals intended to address trauma, reduce the number of encampments in the city-parish, and curtail littering and panhandling in 2021.

The goals, which were announced this month, are being implemented through various partnerships Broome has established through the Mayor’s Homelessness Prevention Coalition.

“The eight goals we’ve outlined definitely show the need, in terms of overall priorities within homelessness prevention,” said Pamela Ravare-Jones, one of Broome’s assistant chief administrative officers. “Affordable housing is a big piece. Another immediate win: the Mayor’s Office is looking to implement our community awareness campaign which includes anti-littering messaging and panhandling.”

Panhandling is an issue many downtown businesses have looked to City Hall for for immediate solutions. This year, Broome considered outlawing aggressive panhandling along public streets and sidewalks through a proposed ordinance, but the idea drew criticism from some civil rights advocates.

Broome’s spokesman, Mark Armstrong, said that idea is “on pause” at the moment as the administration and homeless coalition work to address the crisis through the goals they’ve set for next year.

Michael Acaldo, president and CEO of St. Vincent de Paul, thinks the coalition’s planned approach will definitely have an impact on the local crisis.

His faith-based organization runs a downtown-area shelter, and is a member of the mayor’s coalition. He says the city-parish’s issues surrounding homelessness have only been exacerbated by the pandemic, which crippled the local economy and left many people out of work.

“We’ve been doing what’s necessary to provide people with night shelter and assisting anyone who just comes by and wants assistance,” Acaldo said. “I think 2021 will be equally challenging. The timing of this is good. It focuses on the goals of really making sure a great inventory of social services are available and people know where to go to get them.”

The last “Point in Time” count conducted in East Baton Rouge Parish last year showed there were approximately 353 people without permanent housing. Because of the coronavirus pandemic, a Point in Time count didn’t occur in 2020 out of fears of too much face-to-face contact, Jones said.

Much of the work toward implementing the 2021 goals has already begun and residents should already be seeing noticeable changes, at least in the downtown area where loitering was most problematic, she said.

“These individuals were put in non-congregate shelters and are now transitioning to temporary housing,” Jones said.

The Office of Community Development and Build Baton Rouge have also allocated more than $6 million of grant funding to community groups that have provided case management, shelter operations and other services to homeless individuals.

And the Department of Public Works has increased litter crews in high volume areas and “No Littering” signage is being installed in those some places.

Capital Area Recovery Program is sending outreach team in mobile vans to interact with the city-parish’s homeless population to steer them to the resources they need, like detox programs and workforce opportunities, to help get them off the street.

“I feel confident as a collective group we’ll work to develop solutions to improve lives and change the future of individuals who are homeless in East Baton Rouge Parish,” Jones said.

2020-12-27
Previous Post: Remember when an assault in Denton made it on TMZ?: The top crime stories of 2020 | Year in Review
Next Post: Boy to be in Chick-fil-A commercial after using birthday money to buy food for homeless – fox28media.com