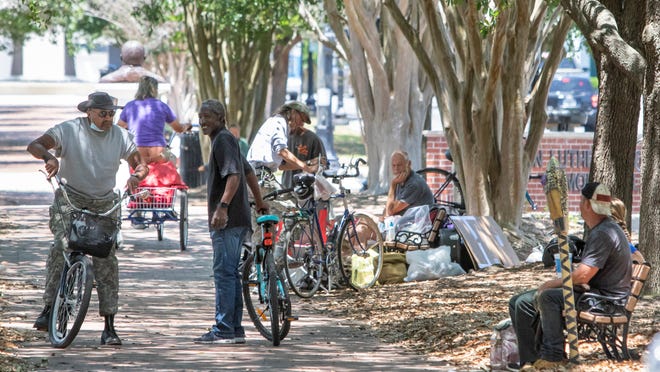 Local officials have tried before and failed to address homelessness in Pensacola, and another plan is set to be brought to the City Council for discussion next month.

City Administrator Keith Wilkins told the News Journal that they are working on a series of proposals for the city to help homeless people and address the issue of panhandling in the city after meeting with downtown business owners last month.

“We’re putting all that into a report, and we’ll kind of phase the actions in the report so city council and the mayor can do some short-term stuff, some long-term stuff and put some dollars to it,” Wilkins said.

He said the plan was still a work in progress but will include providing public restrooms downtown, a public education campaign to discourage giving to panhandlers, and forming teams to go out and provide care to homeless individuals.

Pensacola Mayor Grover Robinson tried to tackle the issue of homelessness by bringing together city and county officials along with private organizations that help the homeless at a summit meeting at the Pensacola Bay Center in 2019.

Out of the meeting came a consensus that more shelter was needed, as well as a way to coordinate care between the several different organizations. However, nothing happened following the meeting as both the city and county couldn’t agree on how to split the cost of providing a shelter.

Since then providers of homeless care in Pensacola have been hit hard first by the COVID-19 pandemic and then by Hurricane Sally, forcing many groups to close or reduce services and leaving an already vulnerable population with fewer options for care.

Last week, many of Pensacola homeless care providers held a “Homeless Coalition” meeting over Zoom to discuss the different issues each provider was facing and how they can help each other. The meeting was dominated by a discussion of how to deal with the ongoing COVID-19 pandemic.

COVID-19 affects homeless:How do you stay home without a home? Pensacola homeless ‘devastated’ by coronavirus closures

John Johnson, executive director of Opening Doors Northwest Florida, organized the meeting and told the participates that his organization had done counts of “street homeless,” which is homeless individuals visible on the street.

Johnson said Pensacola Neighborhoods Administrator Lawrence Powell will be organizing a meeting with homeless care providers to incorporate their feedback into the city’s proposed plan on homelessness.

He added the caveat that the count doesn’t represent the actual number of homeless as they didn’t count individuals in shelters, people who may be living out of their car and people who were at the eight to 12 homeless camps around Pensacola at the time of the count.

Opening Doors has been limited to providing help remotely because of the COVID-19 pandemic.

Jason Grizzard, vice president of ministry services at Waterfront Rescue Mission, told the group their shelter was badly damaged in Hurricane Sally but repairs were on track to reopen their overnight shelter. But the shelter would be limited to about 30 people. Meanwhile, Waterfront’s day service remains suspended while the building is being repaired.

In the wake of the pandemic, many homeless people have turned to downtown Pensacola. The Pensacola Police Department said in May the number of homeless individuals downtown tripled, and over the summer many business owners started calling on the city to do something about the issue.

The city held a meeting with nearly two dozen downtown business owners on Oct. 29 at the Saenger Theater.

Wilkins said out of that meeting came many of the ideas that will be in the report to the mayor.

Dan Lindemann, the owner of AJ Mugs on North Palafox Street, said he’s been frustrated by the homeless situation downtown, especially with the increasing number of individuals who are urinating in broad daylight in public and the city’s only solution thus far has been to ignore it.

Lindemann said he was encouraged after the city’s meeting because he said officials acknowledge they haven’t done anything to solve the problem for the last 10 years.

Lindemann said he likes the idea of the street teams that are similar to a program in place in St. Petersburg, which has been successful.

Wilkins said the idea would be to put teams of three people together, a social worker or mental healthcare provider, a private homeless care provider, and a police officer who would go to where the homeless people are and attempt to help them.

Dave Schmidt, the owner of Schmidt’s Music, was more skeptical of what he heard at the meeting, especially trying to discourage the public giving to panhandlers.

“I don’t think that’s possible myself,” Schmidt said. “I think that’s the city trying to push it off another direction.”

Schmidt said he believes the solution is the city providing more services rather than relying on private providers, many of which are faith-based.

“We pay all our ad valorem taxes for this area,” Schmidt said. “I’d like see some of that go to the homeless, but something real. To just lay it all off on the churches, now, come on. I don’t like that either. I think they should partner with the faith-based community and try to really get something accomplished.”

Schmidt said he’s worried as the COVID-19 pandemic goes on more people are going to find themselves homeless and on the city’s streets.

“It doesn’t appear to me that the city had a plan. If they’re going to spend $50,000 on the puppy palace, what’s the plan for the humans,” Schmidt said, referring to the Pensacola Downtown Improvement Board spending $50,000 to build a “Puppy Pitstop” next to the Jefferson Street Parking Garage.

Wilkins said the report will be given to Robinson at the end of the month and Robinson will decide whether to bring it to City Council.

Robinson said last week at a press conference he hopes the report will provide an opportunity for the city and county to work together with private organizations to provide services to the homeless population.

“We’re still very focused on how we can provide services,” Robinson said. “I think what’s going to be also very important is how we can work with individual service providers. Because I don’t think the city or the county themselves — I don’t think government itself — can take care of all the problems with this. We’re going to need to partner with those agencies that do this.”

The homeless report will likely be one of the first major issues addressed by the new Pensacola City Council, which will be sworn-in later this month. It will be the first majority-women council in the city’s history.

“I don’t know several of them very well, but I think there will be pretty strong social conscience among them,” Wilkins said. “And I think they’ll be inclined to take some kind of action.”