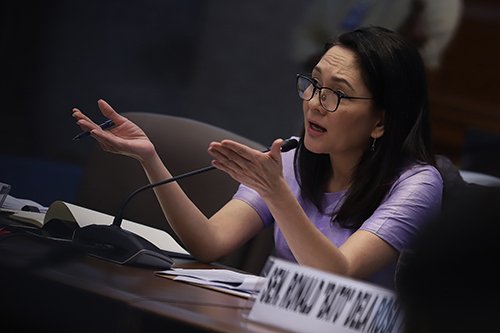 Senator Risa Hontiveros has filed a bill that would monitor Philippine Offshore Gaming Operators (POGO) and other gaming and amusement venues in a bid to stop sex trafficking activities in the country.

In filing Senate Bill No. 1929, Hontiveros proposes to update policy gaps in the Anti-Trafficking in Persons Act of 2003, following revelations during a Senate hearing on how Chinese women were trafficked into the Philippines to service Chinese POGO employees.

It was Hontiveros’ panel, the Senate Committee on Women, Children, Family Relations and Gender Equality, that took the lead in investigating the so-called “pastillas” scam which investigated the Bureau of Immigration (BI) for bribery and alleged human trafficking activities involving Chinese nationals.

“The rise of POGOs has also been found to increase the vulnerability to trafficking and prostitution of our own women, our own girls,” the senator said.

Under the measure, the Department of Foreign Affairs (DFA), in coordination with the BI and the Department of Justice (DOJ), is mandated to ensure that these sex offenders should not be able to step foot in the Philippines.

The bill also includes the recognition of the use of online and digital platforms for human trafficking and imposes penalties on private facilities, such as Internet service providers, financial intermediaries, transport services including their online applications, that knowingly allow the use of their facilities, whether digital or physical, for purposes of trafficking.

The bill also expands the definition of trafficking in persons to include the online sexual exploitation of children (OSEC).

“Hindi pwedeng hands off ang mga tech giants sa isyung ito. Their platforms have made it easier and faster for many abusers to violate our women and children,” Hontiveros said.

“It is high time that they be made accountable for their products, and for them to also help secure a measure of justice for victim-survivors,” she stressed.

The lawmaker said Congress should expedite passage of the bill into law amid recent reports dubbing the Philippines as the global hotspot of OSEC.

“New technologies show no signs of slowing down, but these are now used to harass, exploit, and abuse our women in a myriad of pernicious ways. Ngayon pang may COVID-19, kung kailan palaging online ang mga tao, mas bumigat ang karahasang dinadanas ng ating kababaihan at kabataan, (Now that there is COVID-19, all people are online and incidence of violence against women and children increased),” the senator said.

2020-11-25
Previous Post: Pandemic’s impact on adoption isn’t all negative
Next Post: US must update laws to fight it