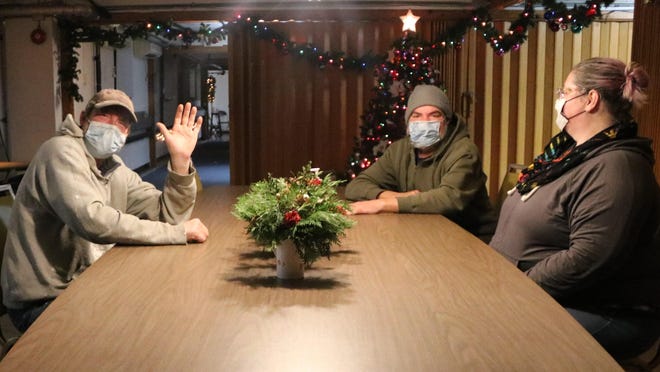 PORT JERVIS – Hangouts are scarce for homeless people on cold days, now that libraries and restaurants are closed to visitors because of the pandemic.

“The numbers coming to shelters are down across the county,” said Jack Austin, a longtime volunteer at the Port Jervis Warming Station at St. Peter’s Lutheran Church. “I don’t know why. Maybe the homeless are smoothing things out with relatives, so they have better situations.”

He notices them walking around Port Jervis, going in and out of Dollar General, Family Dollar and Rite Aid. Save-A-Lot has machines where they can redeem bottles and cans they collect in huge bags. They spend that money and handouts as they go in and out of stores to stay warm, he said.

Consequently, when people call the Port Jervis Warming Station and ask what would be useful to donate, Austin suggests gift cards for nearby eateries, such as Burger King, Port Jervis Pizza and Good Friends Chinese food. He also mentions particularly useful gifts of the past.

“A woman donated 120 pairs of socks. Warm feet are important. When socks get wet, they throw them out. The last two winters, one guest had frostbite infections and had to go to the hospital. He couldn’t walk,” Austin said.

Other useful gifts have been packages of t-shirts and underwear. But the homeless have no place to store clothes they get from TJ Max, and Walmart is too far, so he discourages gift cards for those stores.

St. Peter’s has guests who have been coming for years, in addition to the homeless found on the street by police or dropped off after visits to the hospital emergency room.

On Sunday night, several guests lay on cots in a darkened room, and a few guests sat at a long table eating hot dinners served from a kitchen window, as Brian Lewis, warming station operations manager, chatted with them.

“We see each other every day,” said one guest, Chris, referring to George, sitting across the table.

“I spend five months of the year with them. It’s hard not to be friends,” Lewis said. “I was a custodian here, picking up after them and turning on the heat, and this turned into a life-changing job.”

Asked how, he said, “It changed my perspective. It could be me here. Everybody who comes through the door comes from a different background and experience, with a different reason for being homeless,” although he noted that mental health and substance abuse issues are often factors.

“Many got into housing,” said Lewis. “They were given a checklist of all the things they would need to get their lives back in order. But nothing’s normal. Last year was warmer than this year, and on the warmest nights we have the highest numbers. When it’s really cold, maybe people let them sleep on their couches.”

Austin expressed doubt that social service housing efforts had reduced numbers much, because of the limited numbers of social service workers and the obstacles for the homeless. Many have longstanding substance abuse and mental health issues, unchanged by rehabilitation efforts, he said. He suggested one factor might be that fewer people from out of town are traveling through. Previously, some travelers coming to Port Jevis and finding no available motel rooms, or at least none they could afford, would stay overnight at the warming station. But travelers are now few, Austin said.

As for what the local homeless do during the day, George said he watches television at the house of a friend he has known since his teens.

Chris has some work for a friend of a friend putting drywall in a room. George told him to let him know if he needed help. But otherwise he wanders the city, “back and forth, back and forth,” he said. “If it wasn’t for this place, I’d be dead. It was five degrees five days ago. Where else is there to go?”