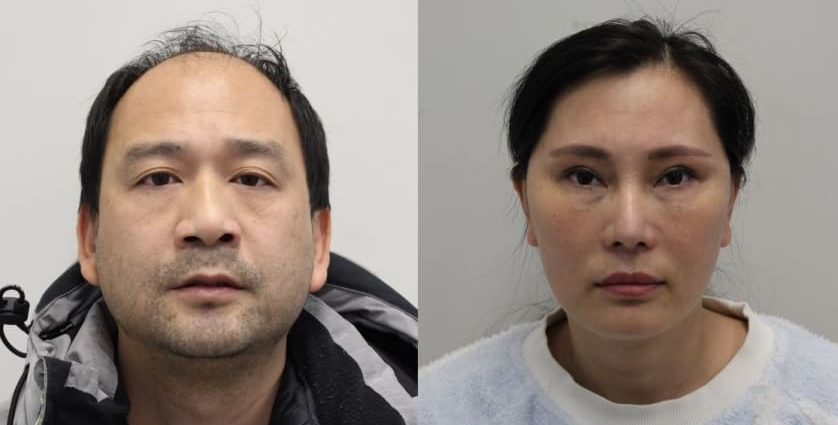 A married couple have been found guilty of human trafficking after a woman who was sold to the couple by her husband escaped.

The unidentified woman, who is aged in her 30s, attended Kensington police station in July last year and told officers she had been trafficked to England from China and made to work as a sex worker.

She left China after her husband and she agreed it would be safest to migrate to England as she was being followed by people her husband was indebted to, Isleworth Crown Court heard.

She landed in the UK on 5 December 2015 and was met at the airport by her husband’s friend, who then took her to an address. While she was sleeping, the man entered her room, took her travel documents and raped her.

It was then made clear to her that her husband had sold her and that she had to make money for those who controlled her.

She was taken to other locations and had to provide sexual services, sometimes with up to 10 men a day.

The victim referred to the couple who owned and controlled her as “Big Brother’” and “Mimi” – later established by officers to be Wai Tsang, 52 and Wenwen Pan, 40, both of St Mary’s Terrace, Westminster.

As well as being forced to perform sexual services, the victim was also told to sell drugs to clients.

A woman, now identified as Pan, would tell her what drug the client wanted and to give it to the client when he arrived. Clients would be provided with cocaine and crystal meth.

Pan was violent to the woman once when she became aware the woman had refused to take drugs with a client. The victim was kicked by Pan and her hair was pulled out.

The victim was also threatened with violence and she was told that her family would be killed if she tried to escape.

The court heard that it was this fear of violence against herself and her family that prevented her from escaping or going to the police earlier.

The victim was able to escape the property and report the ordeal to the police in July 2019.

As part of enquiries, undercover operatives were deployed. They contacted a telephone number, which was identified as advertising sexual services. They then met the women who confirmed sexual services would be provided, before making excuses to leave.

After building enough evidence against the couple, officers executed a series of warrants on 16 January 2020.

Tsang was arrested in Waterloo Place, where he was parked in his vehicle after picking-up a woman from High Street Kensington and dropping her nearby. He was arrested on suspicion of facilitating the travel of a person within the UK with a view to exploitation and controlling prostitution for gain.

Later that day, police knocked on the front door of the home of the couple, where Pan answered but refused to open the door fully. Officers forced entry to the flat after she attempted to throw a basket of mobile phones – later discovered to be used to connect trafficked women and “clients” – and Pan was arrested on suspicion of human trafficking and controlling prostitution for gain.

During a search of the flat’s office, police found a large quantity of Class A drugs, namely cocaine and crystal meth, as well as a set of scales. Pan was further arrested on suspicion of possession of a Class A drug with intent to supply.

The couple will now both be sentenced at the same court on 22 January 2021.

PC Sam Bhangu, from Central West area’s Sexual Exploitation Team, said: “Tsang and Pan were part of a conspiracy directing and controlling the activities of sex workers. They had absolutely no regard for the wellbeing of the women they controlled. They dehumanised them and treated them as objects for their own personal financial gain.

“I’d like to commend the huge amount of bravery shown by the victim, not only for reporting these atrocious crimes to us but also for her vital assistance throughout the investigation, which ultimately helped us to bring Tsang and Pan to justice.

Detective Constable Stu Higgs, from Central West’s Sexual Exploitation Team, added: “Modern slavery and human trafficking are often hidden in plain sight and we need the public to recognise the signs and report their suspicions. If you suspect someone may be a victim of modern slavery, tell someone. You will always be taken seriously and protection and support is available.”