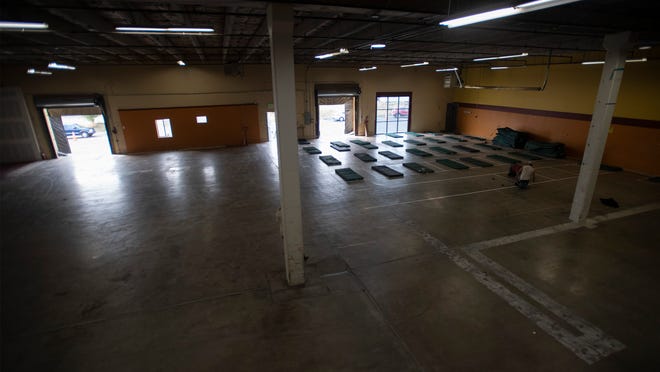 The outbreak, which is expected to grow in numbers as more testing is conducted this week, showcases the unique risk that COVID-19 poses to Fort Collins’ homeless population — especially as overnight temperatures continue to drop, pushing more people to indoor shelters. COVID-19 transmission is thought to be about 18 times more prevalent indoors than outdoors, so any congregate living facility faces a considerable inherent risk of transmission.

The seasonal shelter, operating out of rented space at the Food Bank for Larimer County site, has provided shelter to about 100 single men each night since it opened in November. The facility shelters men from 5:30 p.m. to 7 a.m. and can accommodate up to 150 people.

The Blue Spruce shelter outbreak includes 50 cases among shelter guests — about half of the shelter’s average occupancy each night — and four cases among Rescue Mission staff. The first case was confirmed Nov. 23, but the majority of the cases were confirmed last week, when the confirmed case count jumped from 10 to 50 in a two-day period.

Because of a heavy testing backlog at Colorado’s state lab, the Rescue Mission didn’t receive results from testing conducted on Nov. 25 until Dec. 2. Those results yielded 27 new positive cases. Another round of testing conducted Dec. 2, which came back the next day, yielded 13 more positive cases. The Rescue Mission is conducting another round of testing this week and hopes to get results quickly, spokesperson Ellie Petrik said.

HOMELESS HELP:When pets get care, their homeless owners can, too, thanks to Street Dog Coalition, CSU

The health district is leasing two houses to use as IRQ sites for homeless people who test positive for COVID-19, are showing COVID-19-like symptoms and waiting for a test result, or are close contacts of confirmed cases. Those sites have accommodated people from Fort Collins homeless shelters, Larimer County Community Corrections residents, discharged hospital patients who don’t have homes and a few people who were displaced by the Cameron Peak Fire, Stewart said.

The IRQ overflow location is meeting current capacity needs because some of the 50 people who’ve tested positive since November have already recovered or reached the end of their isolation periods, Stewart said.

But the health district is seeking assistance from Larimer County and the city of Fort Collins for additional space to meet future IRQ demand, he added. The community also lacks space for homeless people to quarantine if they are close contacts of positive cases but haven’t tested positive themselves. Public health experts consider quarantine an essential strategy to mitigate the spread of COVID-19 because the virus has a long incubation period, meaning people may test negative for the virus for one to two weeks after they’ve contracted it.

“Lack of access to safe housing and shelter is the fundamental problem we’ve been dealing with since the pandemic hit, and even before,” Stewart said. “The pandemic has really shed light on how important housing is for health.”

He made a similar point in a news release about the outbreak, noting that “when it comes to COVID-19, ‘safer at home’ cannot exist without a home.”

Fort Collins Rescue Mission has been checking guests’ temperatures and monitoring any symptoms when they arrive at the seasonal shelter each night, Petrik said. Shelter staff were previously encouraging but not requiring mask-wearing for shelter guests, but they made masks mandatory starting last week. Shelter guests are expected to wear masks at all times, except when they’re eating by themselves. Beds are spaced about 8 feet apart, Petrik added, and shelter staff clean the facility daily.

Seth Forwood, senior director of Fort Collins Rescue Mission, said in a statement that staff will continue to “vigilantly protect and care for our guests using all resources at hand, no matter the positivity rate we receive from testing.”

“Their health and safety is our top priority,” he added. “Though so much has changed this year and throughout this pandemic, our calling and mission to stand alongside our guests as we give them shelter will not. It only adds to this privilege that we get to do so along such professional and competent community partners.”

The Blue Spruce shelter began operations about five months after the closure of the emergency homeless shelter at the Northside Aztlan Community Center, which Fort Collins City Council shuttered this summer to make way for a kids day camp. The Aztlan shelter was open 24/7 and began operations after the city shut down a homeless encampment on city property adjacent to the community center.

Since then, the city of Fort Collins and community partners have launched a temporary program offering motel rooms to about 30-35 people who are homeless and at high risk of COVID-19 complications. The city is also working with Westminster Presbyterian Church to provide day shelter during inclement weather.

Jacy Marmaduke covers government accountability for the Coloradoan. Follow her on Twitter @jacymarmaduke. Support her work and that of other Coloradoan journalists by purchasing a digital subscription today.