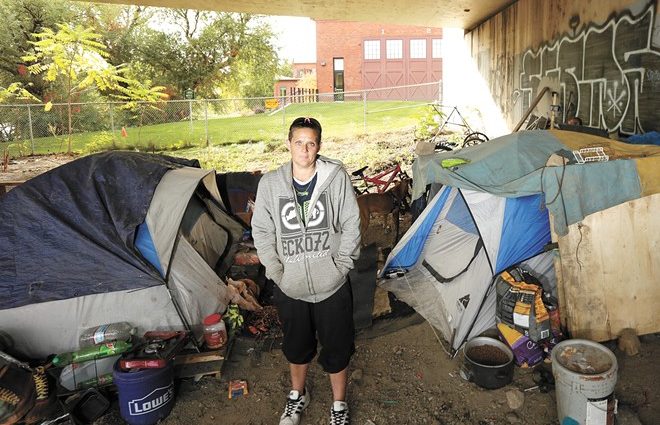 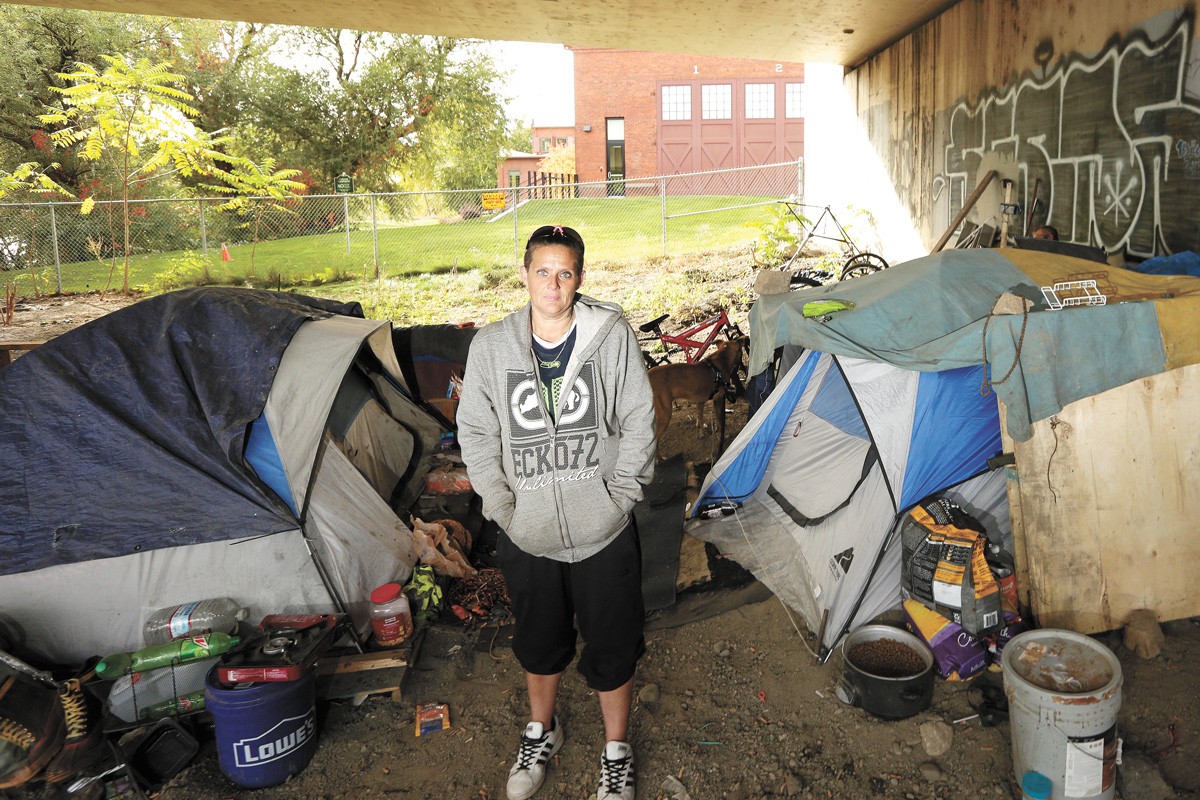 JoAnna Epperson, who has been homeless off and on for 20 years, pictured at camp earlier this week. |Young Kwak photo

One morning last November, JoAnna Epperson, 38, saw a group of Spokane Police and city workers approach her camp, which was set up in an area between downtown and Browne’s Addition.

She knew what was coming: For the third time this year, they would ask her to pick up her stuff and go somewhere else. They’d issue her a criminal citation for unlawful camping, a misdemeanor. She would then go to Spokane’s Community Court, which aims to connect people with services and lift them out of homelessness.

But Epperson, who says she’s been homeless and battling drug addiction for 20 years, felt stuck. The city was working with nonprofit Jewels Helping Hands to open a warming center, but it wasn’t open yet that day on Nov. 11. And there was no other shelter with a bed where she could feel safe, she says.

“Where are we supposed to go?” Epperson remembers asking. “We were waiting for Jewels to open the warming center. We had no place else to go.”

That question was at the heart of the Martin v. City of Boise case, the case that led the Ninth Circuit Court of Appeals to rule in 2018 that when there is no shelter space available, it amounts to cruel and unusual punishment for cities to enforce bans on camping in public spaces. The U.S. Supreme Court declined to hear the case in December 2019, letting that ruling stand. And Spokane has not ignored it: The city’s own law against sitting or lying on public sidewalks, known as sit-lie, makes it explicit that there is an exception for people who are homeless “during a time frame when shelter space is unavailable.”

But an Inlander investigation of court records reveals that since November 2019, Spokane Police have issued 30 citations for sit-lie or illegal camping on days the city’s own system reported no available low-barrier shelter space.

The police reports associated with some of those citations reveal a lack of clarity and consistency among police officers when determining whether there is open shelter space. Low-barrier shelter space, necessary to enforce these laws, do not include shelters that may impose religious requirements or require sobriety, like Spokane’s Union Gospel Mission. Yet in multiple instances since last year, officers counted those shelters as available bed space in their case reports.

Other citations are inexplicable. One officer cited a man for sit-lie on Sept. 20 and wrote that “many different options and resources were available.” Updated nightly, the city’s shelter capacity report shows that both low-barrier shelters for single men, including House of Charity, should have been listed as full at the time the citation was written. Still, the officer not only listed House of Charity as an available resource, but also “the many other parks near to downtown such as Coeur d’Alene Park.”

Spokane Police spokeswoman Julie Humphreys says the department stands by the decisions officers make in the field. Though she admits she’s unsure why one officer referenced Coeur d’Alene Park, she emphasizes that the goal of these citations is to get people the help they need in Community Court.

“We all want to take care of our homeless situation and do it in the best possible way,” Humphreys says. “The reason for sit-lie and camping [laws] is that the community doesn’t want homeless people laying around downtown, or camps and all that come with it.”

But City Council President Breann Beggs says he’s concerned that police may be issuing citations when there’s no shelter space.

“That creates liability for the city to be sued,” Beggs says.

OUT OF SPACE
In early November 2019, the city of Spokane knew it didn’t have enough shelter space for the winter. City officials were still working out a deal with nonprofit Jewels Helping Hands to open a shelter on Cannon Street, but it wasn’t until the end of the month that the shelter finally opened. In the meantime, shelters for men, women and families all were regularly turning people seeking shelter away.

From Nov. 1 until Nov. 21 — before the 80 beds at the Cannon Shelter opened up — police issued a total of 68 citations for illegal camping or for sitting or lying on public sidewalks. A majority of those citations, including Epperson’s, were issued when there was shelter space available, in compliance with the Ninth Circuit ruling. But 13 were issued on days when the city’s reporting system indicated that there wasn’t space for that person.

Spokane Police don’t have a written procedure for how they determine shelter space. But they do follow a process, Humphreys says.

Shelters report bed space to the city each night between 5 pm and 10 pm, and those numbers go into a spreadsheet maintained by the city. (The city provided the Inlander with a copy of this report dating back to November 2019.) That information is fed into a dashboard that police can use to check shelter space from the night before, Humphreys says. Police check that each time before issuing a citation, she says.

Assuming that as the standard process, however, is how the Inlander found the 30 examples of citations issued when the city reported no shelter space. All the citations obtained by the Inlander were issued during the day, before shelters reported to the city again at night. That should rule out the possibility that police used shelter availability from the day of the citation instead of the day before.

Asked for an explanation for these citations, Humphreys says while police do check the dashboard for shelter space, it’s more “fluid” than that because even if there are no bed spaces, there could be daytime services available at the shelters. Police often report available space if a shelter is simply open that morning, even if it was full the night before.

There was no shelter space available the morning of Nov. 11, going by the reported data from the night before, for example. But four men were cited for unlawful camping that morning anyway, starting at 8:25 am, because police said the House of Charity was “open” from 7:30 am until 12 pm, Humphreys explains. She gave the same explanation for several other citations through the winter. (Truth Ministries, too, was under contract with the city to operate as a low-barrier shelter in November, but failed to report its space to the city many nights.)

The pandemic changed all this. Mayor Nadine Woodward publicly said the city wouldn’t be enforcing sit-lie or camping laws in March, and indeed, records show there were no citations for sit-lie or illegal camping issued during a two-month period between late March and late May — except for one, on April 1. Again, in that instance, records show there was no space available for the cited man.

Because of COVID-19, shelters like House of Charity stopped allowing guests for daytime services if they weren’t staying there the previous night, and daytime shelter for the homeless became difficult to find. Police could no longer say House of Charity was open for anyone just because it was open at all. Still, they issued 48 more citations from July 25 through Sept. 30. One-quarter of them came on days that the police would have looked at their dashboard and seen that shelter was full.

The explanations justifying enforcement of those are often confounding:

Four more men were cited together on Aug. 31. The Inlander could not immediately access this case report, but Humphreys explains that the officer wrote that there was space for the men at House of Charity. The shelter capacity report, however, says otherwise.

“Could there be a mistake somewhere in all of this? It’s possible. It’s certainly nothing intentional.”

A different officer cited three more men between Sept. 8 and Sept. 10, writing that there was space available for men and women “at all times at several different shelters.” In fact, both shelters for adult men reported zero space every single day from Sept. 7-Sept.11.

An officer listed Coeur d’Alene Park as an available resource for a man on Sept. 30. It’s the same officer who did so 10 days earlier, only this time he listed addresses for three other shelters available to the man. Those shelters were either not part of the city’s low-barrier system or were not shelters for single men.

Presented with each of these cases, Humphreys says SPD still backs its officers and their judgment.

“They’re not writing reports and saying there’s space unless there was space,” she says. “Could there be a mistake somewhere in all of this? It’s possible. It’s certainly nothing intentional.”

ADDRESSING THE ISSUE
Spokane Police Chief Craig Meidl says his command staff recently brought up this issue of how officers report shelter space when enforcing sit-lie and camping laws. Meidl floats one way to possibly address any confusion: Instruct officers to be clearer about where shelter space is available in their case reports.

“Go down and have them actually write in their report, not that they checked and there is capacity, but have them write the specific capacity at that moment that the officer looked,” Meidl says. “Because I think that will help.”

Beggs would go further. He argues that the nightly shelter capacity report should be available for the public to see at any time. He adds that once the numbers are reported at night, police should go by those numbers until the new report comes out, instead of the current system, which may count daytime services, and that Beggs calls a “moving target.” He says that would eliminate some current uncertainty for all involved.

“People being arrested, under the Constitution, are entitled to that certainty. They shouldn’t have to guess, ‘alright, is there space or not?'” Beggs says. “Everyone wants certainty, whether you’re a business owner, a neighbor of Coeur d’Alene Park, or an advocate.”

Others argue sit-lie and illegal camping laws shouldn’t be enforced at all when there’s no 24/7 emergency drop-in shelter. Julie Garcia, founder of Jewels Helping Hands, says she doesn’t understand how it’s legal to enforce them now, even if there might be a bed available later that night.

“How do you issue a ticket for a bed that they might be able to get later, but that they technically aren’t able to go to at that point?” Garcia says.

The constant citations can make people feel harrassed, Garcia says. To her point, of those 30 citations issued since November when records showed no shelter space, all but six of those people had been cited at least one other time for sit-lie or illegal camping. One man racked up 12 citations since 2018.

Those repeat citations make Woodward question whether these citations are working as intended — though instead of less enforcement, she wonders if it’s a call for more accountability for those cited.

“I know people who are cited and go through Community Court have many, many chances to try to right their lives and get the help they need,” Woodward says. “I think we need to take a look at that and just make sure there is accountability in that system and that we are seeing people moving out of homelessness.”

For her part, Epperson says she graduated twice from Community Court. She calls it a good experience that helped her get drug addiction treatment and other services.

But she’s still waiting to find a home. And for now, she’s camping outside, trying to avoid police until either shelter opens up, or she can find a home of her own.

“I’ve been trying to change my ways,” she says. “I’m really hoping to be inside… and be able to relax, and call it my home.” ♦