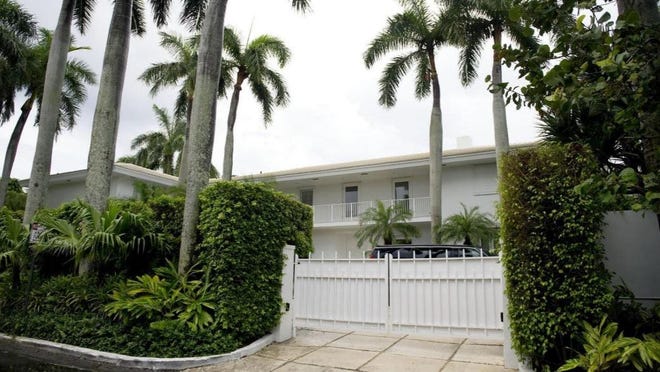 Developer Todd Michael Glaser has made an offer to buy the Palm Beach home of the late convicted sex offender Jeffrey Epstein with plans to raze it and build a house there on speculation, Glaser has told the Palm Beach Daily News.

But any sale is still in the early stages and not yet finalized.

Glaser has put down an initial deposit on the property, but he wouldn’t disclose the amount or how much he has offered to pay for the house.

The lakefront property at 358 El Brillo Way remains listed for sale at $21.995 million in the local multiple listing service. Listing agent Kerry Warwick and broker John Hackett, both of the Corcoran Group, declined to comment.

“We are in the inspection period,” said Glaser, whose eponymous real estate development firm has offices in Palm Beach and Miami Beach.

Built in 1952, the West Indies-style house was one of the homes, prosecutors said, where Epstein assaulted underage girls and young women in an extensive sex-trafficking operation.

The disgraced financier died in August 2019 after he hanged himself in a New York City jail cell, authorities said, while in federal custody. He was arrested the month before and was facing sex-trafficking and conspiracy charges involving underage girls.

The Palm Beach house stands on a lot measuring nearly three-quarters of an acre with 170 feet of frontage on the Intracoastal Waterway, according to the property records and the sales listing.

Glaser hopes to close the sale by the end of the year, he said.

In Florida, a homebuyer making a serious offer on a house typically puts a deposit into an escrow account. After a period of time specified in the sales contract — the so-called “due-diligence” period — the deposit is no longer refundable and the contract “goes hard,” to use real estate parlance. Once that happens, if the property is listed in the MLS, the listing status typically is changed from “active” to “pending,” signaling the property is under contract.

Glaser could withdraw his offer at any time before the contract goes hard and get his deposit back. And other would-be buyers also may be in the running.

Prosecutors said Epstein assaulted underage girls in Palm Beach and at his other homes, including a New York City townhouse, as part of his sex-trafficking scheme. The townhouse in New York was listed for sale in July at $88 million.

“The view reminds me of Lake Como,” Glaser said, referring to the resort area in Italy’s Lombardy region.

Glaser wants to build an Art Moderne-style house on the property, he said, in the style of Villa Today, a lakefront Estate Section house designed in 1931 on Via Bellaria by noted society architect Maurice Fatio.

The new house likely would measure about 13,000 square feet, Glaser said. Any design would need to win the approval of the Palm Beach Architectural Commission.

Executors for Epstein’s estate are selling the house, and proceeds will go to the estate, according to published reports. A compensation fund has been established for his alleged sexual-abuse victims, the Wall Street Journal and other news outlets reported when the house was listed for sale in late July. An attorney for the estate told the Journal that proceeds from the house sale would be subject to claims on the estate, such as taxing authorities, creditors and claimants.

The Palm Beach house and an outbuilding have 14,223 square feet of living space, inside and out, records show. The house was among the hundreds of houses designed by John L. Volk over the society architect’s long career working on the island.

Glaser spent much of his career in real estate development, restoration and renovation in Miami-Dade County before entering the Palm Beach market about three years ago. Among his most prominent projects in Miami is the 1000 Museum condominium tower downtown.

His company also developed a townhouse duplex in Midtown Palm Beach and both of the units are under contract, the MLS shows.

When he and his wife, Kim, are in Palm Beach, they reside in a landmarked 1937 Art Moderne-style house at 1221 N. Lake Way on the North End’s lakefront. They bought that property in 2017, renovated it and won an award from the Preservation Foundation of Palm Beach for their efforts.

In June, The Glasers paid a recorded $17 million for Villa Fontana, another landmarked house that they are renovating at 127 Dunbar Road in Palm Beach. It was built in 1920 and later expanded.

Epstein was initially booked in Florida in 2006 after police said he had sex with underage girls whom he paid for massage sessions at the Palm Beach house. In 2008, Epstein entered a controversial plea deal that led to his conviction on two state felony counts that included solicitation of a minor. That deal let him avoid harsher federal charges similar to the ones he was facing in New York when he died. He served his sentence for his Florida conviction in the Palm Beach County jail.