Easy Targets? Some Oahu Homeless Have Been Ticketed Dozens Of Times During The Pandemic

Sept. 18 was a rough day for Jay Sohl, a homeless man who spends his time in the Waikiki area.

That day, five different Honolulu police officers ticketed him for 14 COVID-19 violations, including not social distancing, not wearing a mask and gathering — two of those within 19 minutes of each other.

“It’s too much,” Sohl said. He accrued so many tickets — 35, totaling nearly 80 violations — that he just threw them out.

As Honolulu police embarked on an unprecedented federally funded ticketing effort to enforce the mayor’s pandemic rules this year, the people cited most often were those with a history of vagrancy citations, a Civil Beat review of judiciary data shows.

With each citation, a defendant is given a court date, but the vast majority of COVID-19 citations are thrown out by prosecutors.

On top of COVID-19 citations, HPD has drastically increased its enforcement of longstanding homeless criminalization measures, including sit-lie bans and rules against blocking sidewalks, the court data shows. In the first nine months of this year, there was a 47% increase in these citations compared to the same period last year, according to court data.

The most frequently ticketed person was a homeless man named Danny Monk who police cited nearly 100 times since March for 199 supposedly pandemic-related violations, according to the court data. Two tickets were given 5 minutes apart, the citations show.

Monk got an additional 37 tickets for homeless-related infractions this year alone, the data shows. Court records indicate the 40-year-old has been living on the street for at least four years. 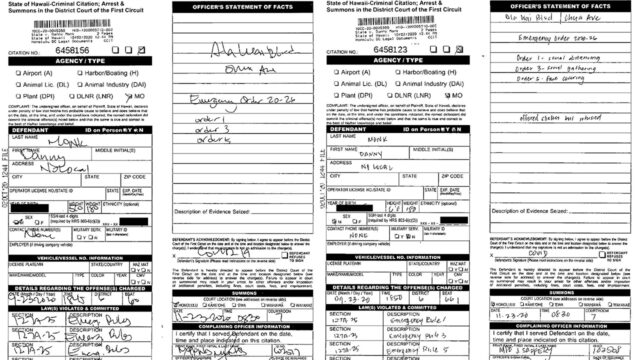 “It’s mind-boggling that this is happening right now,” said Mateo Caballero, the legal director of the American Civil Liberties Union of Hawaii. “Cruelty seems to be the point. I’m left without anything else to justify this.”

Chad Koyanagi, a street psychiatrist and medical director at the Institute for Human Services, said he recognized two names among the homeless people with the most COVID-19 citations. Both are so severely mentally ill that they are likely unaware that a pandemic is even happening, Koyanagi said.

“One guy is just sitting on the sidewalk every day, his hygiene is poor and he has no wherewithal to understand what the law is,” he said. “He probably doesn’t have any grasp of what a pandemic is, or what COVID-19 is.”

Some of the people who have been cited 45 times or more suffer from debilitating and chronic conditions, including vascular dementia related to alcohol use, diabetes and heart disease, according to Christina Wang, a nurse practitioner with the Hawaii Health and Harm Reduction Center.

One chronically homeless man named Robin Talbot was cited for 22 violations. He told Civil Beat he has Alzheimer’s disease.

“The de facto criminalization of homelessness and poverty is neither compassionate nor sensible policy, and doubly so during a deadly pandemic,” she said.

The Point In Time count, an annual homeless survey, shows that 25% of the island’s homeless population indicated a mental health problem, 28% have a physical or developmental disability, 18% indicated a substance abuse problem and 13% are survivors of domestic violence.

The population is also disproportionately made up of Native Hawaiians and Pacific Islanders, according to the PIT count. 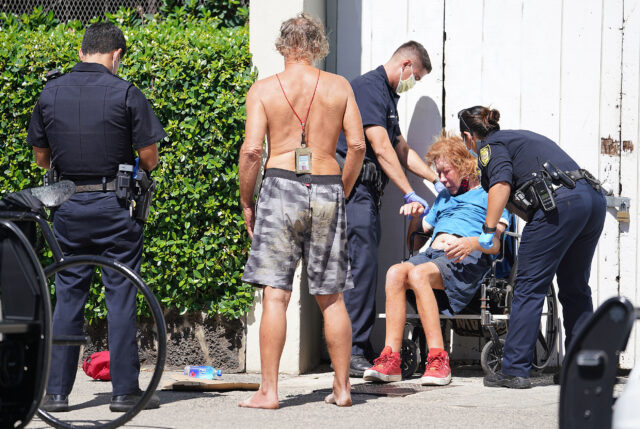 Elmer William Lovelett has been cited for 82 pandemic violations.

The citation binge is happening as shelters have reduced their capacities to allow for more distance between clients. Some homeless people are more hesitant than ever to enter shelters for fear of catching the virus. There was an outbreak earlier this year at the Institute for Human Services. A staff member died.

It’s also happening despite guidance from the federal Centers for Disease Control and Prevention, which recommends against moving unsheltered homeless people unless there are individual housing units available.

“They want us to disappear,” said Joe, a 55-year-old chronically homeless man who asked that his last name not be published.

The court data shows he has been cited 52 times for more than 100 pandemic violations, but 37 of the citations have already been thrown out by prosecutors while the rest are still pending.

“They don’t want us to exist … Where do they think we’re supposed to go?” 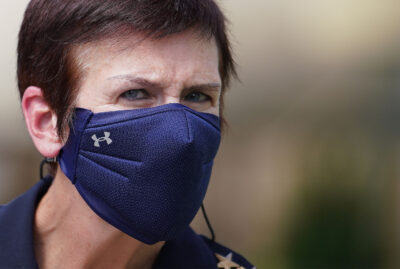 Despite the fact that the court system’s data is a list of citations written by her own officers, Ballard insisted at a press conference last week that it’s “not correct information.”

Regarding Monk, the man cited for 199 violations, she said: “That does not even sound reasonable.”

“We don’t target the homeless,” she said. “We do patrols, and if someone is violating the emergency proclamation, then it is enforced equally, across the board, regardless of your status, your race, your religion, or anything else. It’s equal across the board.”

Still, the data shows homeless people are being disproportionately impacted by enforcement of the pandemic rules.

Of more than 23,000 individuals who received at least one citation under COVID-19 orders, at least 2,100 had a record of a homeless-related violation in the last three years, the data shows.

That’s not including people who got cited for entering closed public parks in 2020. Civil Beat excluded those people from the calculation because sheltered people may have been cited under that ordinance after the mayor closed city parks, whereas prior to the pandemic, it was mostly homeless people.

In other words, despite homeless people being less than 1% of Oahu’s population, they likely make up 9% or more of defendants with pandemic tickets.

Civil Beat’s database of homeless-related violations may not include all relevant statutes and with the limitations of the court’s data entry, it is possible that many more unsheltered people could have been affected.

If you break the data down by violation (because there can be multiple violations per ticket) people with histories of homeless infractions accounted for about 16,000 pandemic violations – about 24% of the total. 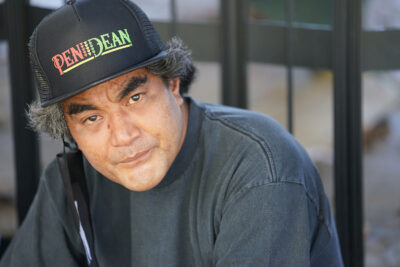 Jay Sohl got so many COVID-19 tickets that he threw them out.

In the case of Danny Monk, court records show the same officers went back to cite him again and again. One officer cited the man 10 different times during the pandemic — in one instance, twice in one day.

The same officer cited Jay Sohl six times at or near the same intersection where both men are frequently found.

Homeless people, their service providers and even police officers have told Civil Beat: Constant ticketing and orders to move them along are a pointless exercise that doesn’t solve the problem of homelessness.

But police say it temporarily satisfies the calls from people who complain about homelessness in their neighborhood.

The police have gotten an increase in homeless-related calls for service in recent months, according to Malcolm Lutu, president of the police union, the State of Hawaii Organization of Police Officers.

With tourists gone and residents under a stay-at-home order for many months since the pandemic began, homeless people on the street were perhaps more visible than ever.

“We have to address the complaints,” Lutu said, adding that officers try to connect people to services but many refuse. “What do you do for people who don’t recognize that they need help?”

This heat map shows the various locations Jay Sohl and Danny Monk were cited over the course of the pandemic. They were cited mostly in the same locations in Waikiki, sometimes by the same officers. You can browse more data by clicking on the colored portions of the map. Cases with citations where location data was not legible were not included.

The COVID-19 tickets are being written by Honolulu police officers on the COVID-19 enforcement team, which is offering lucrative overtime shifts.

Of the $387 million Honolulu received from the federal CARES Act, HPD got at least $16 million for overtime alone, according to a spending breakdown the administration shared with the Honolulu City Council. That reflects overtime for enforcement and other pandemic-related matters for which police assist.

In October, Ballard said that the COVID-19 enforcement team had spent $5 million on overtime to issue citations throughout the pandemic. 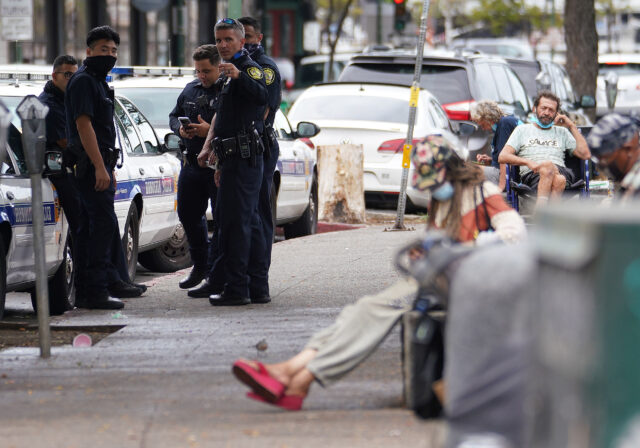 Homeless people have been disproportionately impacted by police enforcement of pandemic rules.

As for how much individual officers are earning, the city won’t say. Civil Beat filed a records request for 2019 and 2020 overtime data in September. The city has yet to respond to the request and isn’t required to since Gov. David Ige indefinitely suspended Hawaii’s public records law.

When it comes to citations, Ballard said she encourages officers to issue “as many as they want” – in part to justify the spending of the overtime money.

“I do not believe that our community would stand by and just want our officers to sit around and do absolutely nothing and pay them overtime to do that,” she said during a conference call with journalists last month.

Officers have gotten the message that they need to be ticketing.

In a September email obtained by Hawaii News Now, a lieutenant wrote that: “The major and captain brought up that this assignment is voluntary overtime, and they are seeing people coming in with zero, one, two, three citations for a six to eight hour shift. They stated that this was unacceptable.”

HPD leaders in the East Honolulu district even implemented a quota of at least two citations per day, per officer, according to a memo obtained by Civil Beat. 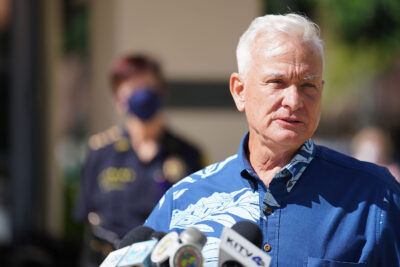 Mayor Kirk Caldwell said the police should be thanked for their work.

Mayor Kirk Caldwell supports HPD’s strategy and spoke defensively about the department at the recent press conference. Regarding citations, he said everyone is treated “equally under the law.”

“I’m grateful for what the Honolulu Police Department does,” he said. “And this constant erosion of the things they’re doing to enforce the laws of our state and city, and our federal laws, I think we should step back and say thank you.”

Citations are criminal summons that require a person to appear in court. Sohl, for example, has five different court dates in November and four in December, court records show.

Hearings can now be done virtually, but attendance requires access to a computer or smartphone.

Missed court dates can turn into bench warrants, which can lead people to be arrested and jailed without even being found guilty of the underlying crime.

When that happens to a homeless person, the belongings they left behind at the time of their arrest – such as the tent they use for shelter, medicines and personal documents needed to obtain services or work – are often stolen or swept by the city, according to homeless advocates.

As for the cases related to violating pandemic rules, prosecutors are declining to charge the vast majority of the citations HPD is issuing, according to the court system.

But even if a case is dropped, homeless people and their advocates say the ticketing itself amounts to harassment and often forces people to move around in direct contradiction of the CDC’s pandemic guidance.

From Caballero’s perspective, the city is punitively approaching social challenges to create the “superficial” appearance that it’s helping.

“They’re using the hammer of the law for issues that are not really criminal,” he said. “Ultimately, neither the pandemic, which is a public health crisis, or houselessness – which is a housing, health, and economic crisis – can be solved by just pouring resources into the police.”

Sign up for our FREE morning newsletter and face each day more informed.