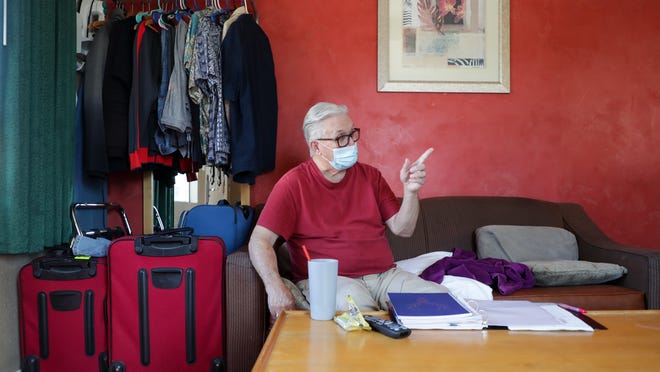 Plus: It’s not too late to send in your California ballot, and if Joe Biden wins the White House, who will Gov. Gavin Newsom pick to replace Sen. Kamala Harris?

Happy Friday! Are you ready for Halloween? I’m Winston Gieseke, philanthropy and special sections editor for The Desert Sun, and to me, most of this year has felt like Halloween. After all, I’ve been wearing a mask and eating candy for the past eight months. But that won’t stop me from bringing you the latest goings-on in this glorious state of ours.

In California brings you top Golden State stories and commentary from across the USA TODAY Network and beyond. Get it free, straight to your inbox.

California EDD director to step down

If you’re one of those who are still waiting for your California unemployment claim to be processed — it was reported earlier this month that there were more than 1.6 million backlogged claims — you might see some changes as there will soon be a new sheriff in town at the state’s Employment Development Department.

Sharon Hilliard, who was named as the organization’s director in February, has resigned, according to a report Friday by KCRA 3 Investigates.

“It has been my privilege to be part of the Employment Development Department team since the day I walked into the EDD building over 37 years ago,” Hilliard said via memo quoted by the station. “At that time I was 19 years old, and looking back I could not have imagined how fortunate it would be to work with so many caring, strong and professional people determined to provide the best services possible to the citizens of California. It is with a heavy heart that I announce my retirement as of Dec. 31, 2020.”

In addition to backlogs, the embattled department has experienced massive amounts of fraud during the COVID-19 epidemic, and a number of state legislators have been calling for Hilliard’s resignation for months.

Project Roomkey is a state program that has sheltered thousands of homeless people in hotels during the coronavirus pandemic. Gov. Gavin Newsom launched the project in April, and as a result, more than 28,000 people — 17% of the state’s homeless population — have received shelter under the $150 million program, which was rolled out in most of the state’s 58 counties.

But several counties have already ended the program, leaving clients with nowhere to go. And on Dec. 30, statewide funding will end, forcing many others to shutter their programs completely or come up with additional funds to allow people to stay longer.

Throughout the state, only 5% of Roomkey clients have found a permanent home, according to an analysis by The Desert Sun. And of the Roomkey clients in Riverside County, 43% — about 375 people — remain in one of many hotel units scattered across the state’s fourth-most populous county, while 29% have returned to homelessness, an emergency shelter or haven’t been able to be tracked.

A subsequent state initiative called Project Homekey aims to rehabilitate old hotels and motels into affordable apartments, but not all counties have received funding. Among those that have, some counties reported that they expect to offer affordable living by the end of the year, while others say their Homekey projects won’t be ready for habitation until mid-2021 or even later. Riverside County’s biggest project to house anyone, including those currently in hotel rooms, will not open its doors until May 2023.

That means nearly 12,000 people, mostly clustered in California’s largest counties, face the possibility of returning to homelessness amid the pandemic, once again.

Is it too late to send in your California ballot?

In four days, Election Day will be upon us, and some people are getting anxious about the postal service’s ability to ferry voters’ ballots to county election administrators on time. But Ben Christopher, writing for Cal Matters, reports that election administrators and legal experts say California voters have little to worry about.

This summer, state legislators passed a law giving any ballot postmarked before the polls close up to 17 days to find its way from a voter’s mailbox to county administrators. This was meant to ensure that even the most catastrophic of postal snafus won’t disenfranchise mail-in voters.

However, if voters want to be super cautious, they can always take their ballot directly into a post office or drop it in a county-managed drop box or at a vote center.

So far, more than 8.7 million ballots have been returned — which is nearly 60% of all votes cast in the 2016 presidential election in California.

And don’t forget: You can still vote in person on Election Day, even without a mask, but you will have more limited options as most counties are running fewer vote centers than in previous elections.

Seven Riverside County firefighters test positive for COVID-19; as many as 80 are quarantined

Seven Cal Fire firefighters from Riverside County have tested positive over the past several months for COVID-19 and about 80 others either had been or are in the process of being quarantined, fire officials said this week.

However, this entire group comprises only about 10% of the county fire department. No stations were closed and there was no impact to service.

Of the seven who tested positive, only one had symptoms, which were mild; the others were asymptomatic, said Cal Fire Capt. Jesse Dofelmire.

It’s believed the cases may have occurred as early as June and aren’t linked to a single source. Firefighters are constantly at risk of exposing themselves to COVID-19 because they are first responders who regularly interact with members of the public.

As of Thursday, about 24 firefighters were still quarantined, though their stations and cities are not being disclosed to protect their privacy.

There have been 67,552 total confirmed cases of COVID-19 in Riverside County and 1,306 deaths there attributed to the illness as of Thursday. About 60,490 people have recovered.

Newsom’s kids are back in private school classrooms in California

Gov. Gavin Newsom said Friday that his four children, ages 4 to 11, are back in classrooms for a “phased-in approach” to in-person learning, Politico reports.

Currently, many schools across California remain closed as a result of the coronavirus pandemic, including most public schools in Sacramento County, where the governor lives.

The Newsom kids attend an unnamed private school in Sacramento County that has a hybrid schedule that alternates remote and in-person education. It is expected to return to full-time next month.

In other Newsom news, the governor is one of more than 8 million Californians who have already voted this year, a figure Newsom has called “remarkable.”

The Sacramento Bee reports that while casting his vote Thursday, Newsom ran into Sacramento Kings player Harrison Barnes. The governor said Barnes was just about the only person he’s spoken with recently who hadn’t offered a suggestion as to who should replace Kamala Harris in the Senate if she’s elected vice president.

“About every other person I run into seems to have a strong opinion,” Newsom said. “I haven’t even processed that decision myself because we’ll have to make that determination after Election Day, whether that’s even an option.”

Politico says at least a dozen California Democrats are seriously in the mix — with Secretary of State Alex Padilla perhaps on top — and their supporters, donors and staffers are jostling to make their case.  When a Senate seat opens up in California, the governor can appoint a replacement without calling a special election. Newsom’s pick would serve the remaining two years on Harris’ term.

That’s all, folks. Have a safe and informed weekend! And don’t forget to set your clocks back one hour before going to bed on Saturday.

In California is a roundup of news from across USA Today network newsrooms. Also contributing: KCRA 3, Politico, The Sacramento Bee.