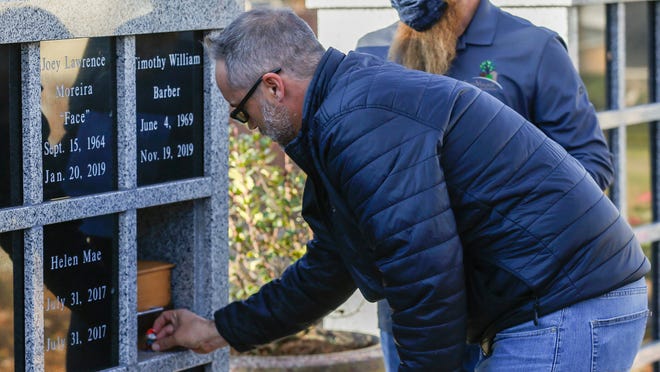 Seven people — all of whom had been homeless — were interred Thursday afternoon during the blessing of the Donnie Wayne Wagoner Memorial Garden at Eden Village.

“This is a holy and sacred place,” said Bishop Edward Rice, moments before blessing and leading the crowd of about 50 in prayer.

Prior to each urn being placed in the columbarium, someone who knew the person spoke about their friend.

Eden Village COO Nate Schlueter spoke about his friend, Darrell “Pops” Gravitt, who died in October. Gravitt had been homeless for more than 30 years before moving into a tiny home at Eden Village nearly two years ago.

“Pops was my friend,” Schlueter said. “He knew Jesus and I know where he is today. It’s an honor to give him a dignified place to rest.”

“She was an amazing, amazing woman. She had the best smile,” Brown said. “We shared tears. We shared happiness. We shared victories.”

Brown spoke about how Bielby loved to roller-skate and often wore blue skates.

“Rhonda will be skating with her blue skates down streets of gold,” Brown said before placing the urn in the columbarium.”

According to Schlueter, Eden Village has an agreement with the Greene County Medical Examiner’s Office. From now on when a homeless person dies in Greene County and no family members claim the ashes, the ashes will be given to Eden Village to be placed in the Memorial Garden.

Springfield Mayor Ken McClure and Springfield Police Lt. Robert Byrne were among those in attendance.

Appleby said Friend had been on the streets for 25 years and battled mental illness. She described him as amazing, funny, kind and considerate.

“Josh was baptized 10 years before he passed away,” Appleby said. “I remember him telling me that was one of the best things he’d done.”

Lorene Stone interred Tim Barber’s ashes. Stone said she learned a lot about herself from being friends with Barber.

Barber only had one arm, Stone said, and sometimes the extra sleeve on his shirts would get in the way. Once she offered to cut the sleeve off, but Stone said no.

“He said, ‘When I give these clothes away, they will be of no use to someone with two arms,'” Stone recalled.

Cherie Cronie interred the ashes of her friend, Joey Moreira. Moreira had been homeless for years but also found a home at Eden Village. He died in 2019.

“I miss him so much,” Cronie said. “I’m very thankful he had Eden Village.”

Eden Village resident Mirenda Barrows stood by Schlueter as he spoke about her unborn child, Helen, who was interred in the memorial garden.

Baby Helen died when a then-pregnant Barrows was struck by a truck as she tried to cross Chestnut Expressway in 2017, Schlueter told the crowd.

Barrows, who was homeless at the time, suffered extensive injuries. The most painful was the loss of her unborn child. Barrows has been carrying Helen’s ashes in her backpack for more than two years.

Barrows now lives in a tiny home close to the memorial garden.

“I just felt she needed to be here,” Barrows said following the blessing and interments.

Donnie Wagoner was the final person to be interred Thursday. Founders Linda and David Brown named the memorial garden in Wagoner’s honor.

David Brown told the crowd that he met Wagoner at the Gathering Tree, an evening drop-in center for homeless people founded by the Browns.

The friendship the Browns had with Wagoner changed all three of their lives, David Brown said.

The story continues below.

Wagoner once asked the Browns, “Why do you love us?”

“I think we were showing him the love of Christ,” David Brown said.

Wagoner became something of a security guard at the Gathering Tree, which closed in 2018.

“He made sure it was safe,” David Brown said. “He never left the property until Linda and I were in our cars.”