‘Everybody has a right to live’: Protesters criticize mayor, BPD after Seminary Square Park eviction 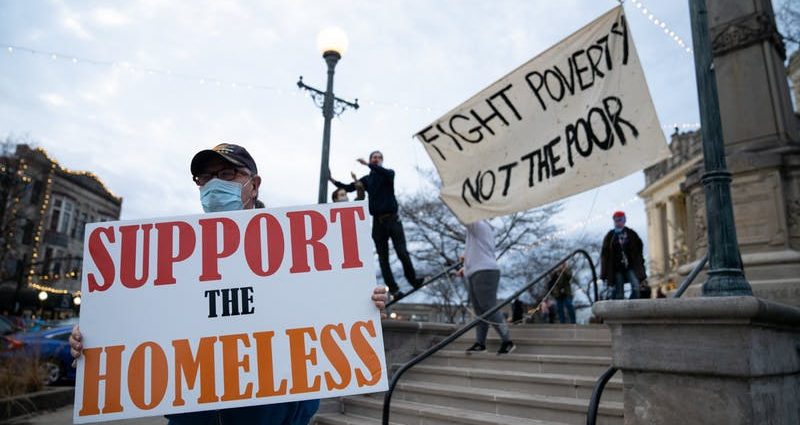 A large group of protesters gathered at 5 p.m. Friday at the courthouse after the Bloomington Police Department and other personnel forced the homeless camp at Seminary Square Park to disperse.

The night was filled with speakers recounting their experiences and alleged injustices by the City of Bloomington. Signs showed support with phrases such as “Everybody has a right to live,” “fight poverty, not the poor,” “support the homeless” and “recall Mayor Hamilton.”

On Tuesday, the Bloomington Board of Park Commissioners voted on a policy supported by city administration and the Bloomington Parks and Recreation Department to prohibit encampments on city structures or property without a permit at any time of day. The policy was struck down with a 1-3 vote, but the existing enactment of an overnight park use rule allowed the sweep of the camp Wednesday night.

Reactions from the events of Wednesday night resulted in an outpouring on social media criticizing the city’s decision. It was described as “horrendous,” “upsetting” and “sad.”

The Bloomington Homeless Coalition first posted about the protest Thursday on Instagram and Facebook. It isalso urging people to call Mayor John Hamilton’s office and the Parks and Recreation Department to stop targeting and evicting homeless encampments.

The Bloomington Homeless Coalition first began in early August after founder Harry Collins started the organization to provide resources and to help people find housing. Collins was a primary speaker at the protest recalling his own experiences and talking about the city’s relationship with the homeless community.

“They’re trying to blame the homeless for the problem,” Collins said at the protest. “The government is the problem.”

He said that the government exploited a loophole in a previous rule to expel the people from Seminary Square. He said the city should have never cleared them out of park and blames Hamilton and Chief of Police Mike Diekhoff. Collins also read the Centers for Disease Control and Prevention considerations for encampments stating people in encampments should remain where they are to not break connection with social services.

Collins said he challenges government officials to live with the homeless community for a week and guarantees those who do would have a newfound respect for those experiencing homelessness.

The Winter Contingency Shelter for Women was supposed to open in November and serve up to 40 women experiencing homelessness, according to a City of Bloomington press release from Oct. 30. Monroe County government and the City of Bloomington each gave $54,250 to support operation costs through March. The shelter has yet to release a date but plans to open sometime in December.

“What happened in Seminary is not new,” Johnson said to the crowd. “They are going to be wet and cold for weeks because there is no place to legally be inside.”

Protester Marc Teller said the city is lying when it says it is concerned about the homeless community and that Wednesday night’s eviction was an act of violence.

“There is a war by the local government,” Teller said. “This started well before the tents were torn down.”

Before wrapping up the night, Teller said he had a list of demands for the city. The demands include ending the removal of people experiencing homelessness in Seminary Park, diverting money from the Wheeler Mission to Hotels for Homeless instead and approving a location for a camp that can still reach essential services.

Teller said there has been an outpouring of support by the community and it has been very encouraging so far. He said his message for the community is to keep showing up with support. He urged protestors to speak with people experiencing homelessness and listen to their stories and emotions.

A little girl and her mother were giving out posters to protesters with an image of a man sitting alone holding a sign. IU sophomore Sarah Greenwell and her group of friends each picked up one of their own.

Greenwell said she hopes the city listens to the protesters and meets the demands of the Bloomington Homeless Coalition listed by Teller. She and her friends agree that they think it’s important that people educate themselves and spread the messages said today at the protest.

“People’s lives are on the line,” Greenwell said. “This is a town that says they are progressive but aren’t.”