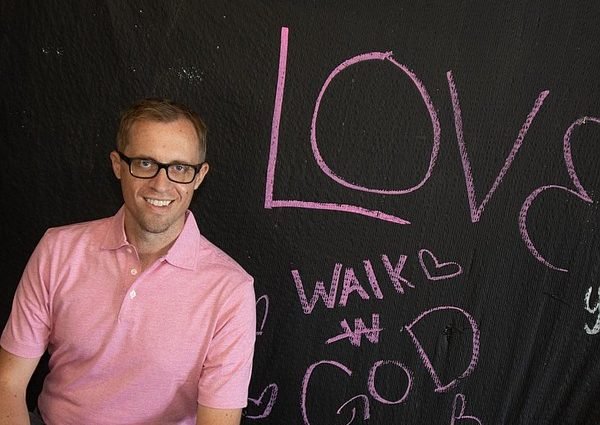 Nadia Sanders slipped a white hardhat over her explosive curls then gripped a black sledgehammer with both hands. The 26-year-old’s expression commingled delight with determination as she strode to the wall, raised the cudgel and brought it into the graffiti-covered drywall with a basso thud.

It wasn’t an act of rebellion or vandalism, nor was it part of her job. The mother of one pulled the hammer’s head free to the applause of about 50 onlooking guests at a symbolic demolition ceremony at Immerse Arkansas’s Overcomer Central — the OC — a warehouse-turned-haven for kids on Asher Avenue in Little Rock.

Sanders, who came into Immerse’s transitional living program about the time she graduated from high school, beamed as drywall dust settled to the floor.

“These people are such a huge part of my life, even though I’ve been gone for a good little while,” she says. “They are kinda like that family I go home to.”

A few moments earlier, Little Rock Mayor Frank Scott Jr. and Immerse Executive Director Eric Gilmore had knocked their own holes into the ceremonial wall, adorned with words like “ABUSE,”https://www.arkansasonline.com/news/2020/nov/01/facelift-helps-center-give-transition-living-to/”TRAFFICKING” and “VIOLENCE.” The Oct. 16 event kicked off a five-month, $800,000 floor-to-ceiling renovation effort to the structure, which will give the organization a more organized space for providing services to kids who are aging out of foster care, homeless runaways, trafficking victims and other kids and families facing difficult situations.

“We have established transitional living for youth in crisis,” Gilmore says. “That’s really one of the main milestones that we’ve set up, a program for young adults to really prepare for adulthood and get on their feet. Ten years ago, that was really non-existent in the area.”

Gilmore and his wife, Kara, founded Immerse a decade ago when, as house parents for a group home, they saw how little was being done to prepare kids for adult life after having spent their formative years outside of stable and supportive households. Immerse works to fill those gaps with services large and small, from structured living units with mentors to miscellaneous drop-in support housed within the OC.

“In 2015 is where we started formulating the idea of a way and a place to provide youth with different kinds of support,” Eric Gilmore says of the center. “In 2017, we bought this building on Asher Avenue and shortly after that started running a street outreach program. We’ve got coaches going out to bus stations and going to coffee shops and going into schools and connecting with youth that are couch surfing because they’re homeless or they’ve run away.”

To the untrained eye, the OC looks very much like a community center or even a church youth ministry space. That’s intentional, Gilmore says, as the environment puts youth at ease, making them more open to asking for and receiving the assistance they need, even if that’s just a hot shower or a place to do laundry.

“We want to make sure that this is a space where young people walk in and they feel wanted, needed and expected,” Gilmore says. “They come in and they feel like there’s a system and process they can step into where they’re going to be inspired to achieve their goals. And that’s what’s behind building this center out.”

According to the National Foster Youth Institute, more than 23,000 children age out of the U.S. foster care system every year. One in five of these youth will become instantly homeless upon reaching age 18, putting many on a path to a bleak future. Only half will have gainful employment by age 24, less than 3% will earn a college degree ever in their life and 70% of girls in this group will become pregnant before turning 21.

The underlying cause of these sobering facts is fairly straightforward, say experts: Kids in the foster care system do not get the same preparation and support for life after aging out as their peers in stable families. In fact, even though federal law requires foster youth be taught self-sufficiency prior to emancipation, statistics show this mandate isn’t being carried out. The U.S. Department of Health and Human Services reports only 22% of eligible youth get access to employment or vocational programs, 28% receive post-secondary support and less than 40% get budgeting or financial management training while still in the state’s care.

Immerse’s transitional program, called LifeBASE, teaches those very skills in a stable living environment, helping youth formulate career and educational plans and generally make up for lost time preparing for life in the real world. LifeBASE has been shown to have an 80% success rate in getting young adults on their feet and moving forward while also creating the kind of familial bonds that have eluded many of them their entire lives.

“I always get jealous, and this is going to sound stupid, of people with family group texts, where they just get to talk to their whole family and make jokes and stuff like that,” Sanders says. “And you don’t think about it until you’ve never made a turkey and who do you usually call? You call your mom, right? When you don’t have a mom to call, you just gotta figure it out. It’s really, really tough.

“I remember my very first holiday with Immerse, by myself, age 18. My biological brothers, we don’t have a great relationship, so it wasn’t an option to go be with them. It was really hard for me, a really dark time. So, 11 o’clock Christmas Eve and Eric and Kara [Gilmore] and some other transition coaches, they came to my house and just surrounded me with love. I still talk to my transition coach today; she no longer does transitional coaching for Immerse, but she’s a huge part of my life, her and her family.”

In addition to the new physical makeover, Immerse is also part of two important new programs. One, a partnership with Department of Children and Family Services, gives the organization access to more youth facing foster emancipation and two, a pilot program to provide in-home supports for youth and their families to strengthen relationships and promote well-being. Eric Gilmore says the group also has a property on contract near the OC upon which Immerse plans to construct the city’s first homeless shelter specifically for individuals 18 to 24.

“There’s a mystery associated with young people who are in these different situations,” he says. “One of the big challenges that comes with the abuse and the neglect and the trauma is that young people tend to feel unwanted. They feel like they don’t fit into society. That’s a big barrier to overcome when it comes to building relationships or connecting with a mentor or volunteer. But it’s worth it; it’s worth the effort.”

More information about Immerse Arkansas is available by calling (501) 404-9890 or go to immersearkansas.org