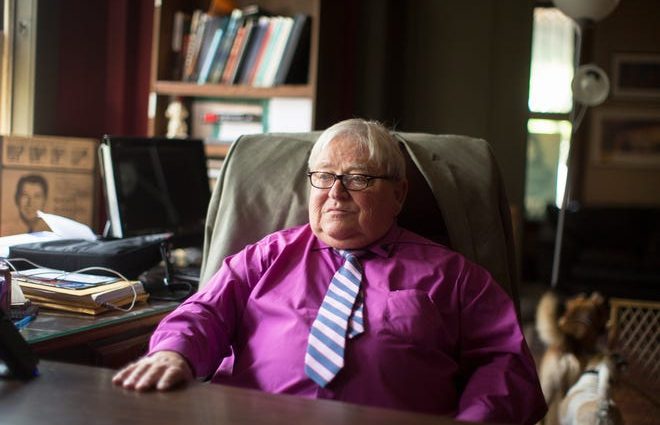 It was cold and quiet in Portsmouth, Ohio, late Saturday morning as Megan Lancaster’s family released “Happy Birthday” balloons to the sky.

Some of the balloons had butterflies printed on them. Another had an assortment of emoji faces. They got caught in the trees on their way up to the clouds. Lancaster’s family watched the balloons float for a few moments, without her. She’s been missing since 2013.

Saturday would have been her 33rd birthday.

Most people in town say they found out about the arrest through social media – even the mayor, although he says he’s been aware of Mearan’s sex trafficking allegations for years. Mearan has consistently denied the allegations.

“In our city or any city it’s horrible if that’s indeed happening,” Mayor Kevin Johnson told The Enquirer. “Being a father and a grandfather, it sickens me. And Mr. Mearan or anyone who would be guilty of that, they need punished to the fullest extent of the law.”

The Lancasters believe Mearan had something to do with Megan Lancaster’s disappearance. She was 25 when she was last seen, and her sister-in-law, Kadie Lancaster, found names and phone numbers kept by her missing sister in color-coded notebooks. The entries included notations such as “dance for” and “men who give money,” and included Mearan’s name and number.

Kadie Lancaster says the family has “waited so many years” for this day.

“I feel that justice is coming,” she said. “And this might be, possibly, more than likely the end of our journey. We will know where Megan is. Whether it’s today, tomorrow, two months, three months from now. (Mearan) is gonna speak.”

The Scioto County Jail confirmed Friday that deputies were in the process of booking 74-year-old Mearan, who was the focus of an Enquirer investigative report last year into sex trafficking in the small city 100 miles east of Cincinnati along the Ohio River.

“If Dante were around, he’d invent an eighth circle of hell for this guy,” Ohio Attorney General Dave Yost told The Enquirer.

In the wake of Mearan’s arrest, many people in Portsmouth were left shocked. Not at the allegations – those rumors have been around for decades. Shocked, instead, that he’d actually, “finally” been arrested.

“Finally. It’s all we can say is, finally,” Kadie Lancaster said.

Lee Scott, owner of Portsmouth’s The Columbia Music Arena, a live music venue, said Mearan is a “smart guy” and a “good lawyer.” If Mearan talks, Scott said, “there’s gonna be a lot of people get hurt.”

“It’s way overdue,” he said. “And it had to take people out of town to do it, because they weren’t gonna do anything locally.”

Scott said he believes other local law enforcement personnel are involved in the sex trafficking ring, so they were not likely to ever investigate Mearan themselves.

The city streets were sparsely populated on Saturday. A handful of people were seen riding bikes along downtown’s sidewalks. Others donned masks and strode inside Market Street Café for a bite to eat.

On Murray Street, behind an abandoned house with the words “step right up” and “hookers” painted on the door, sat a homeless man and woman, a gray pit bull mix at their feet chewing on a stick.

The woman told The Enquirer that Mearan had represented her before. He didn’t help her in a “positive way,” though. She said she does “bad things” at times, but it’s different for Mearan. As an attorney, he was supposed to protect her, and all of the other girls that came through his door, she said.

“It’s a long time coming,” she said of his arrest.

Fear persists for survivors of the scheme

Heather Boots, 40, says she was trafficked by Mearan for at least 10 years, starting in her teens.

She said everyone in the area knew about the conspiracy.

“You can stop at any house in this town and they’ll tell you,” she said.

When she saw Mearan had been arrested, Boots said her initial thought was: “Thank God.” But since then, she’s grown worried. She says she’s scared every day that someone else involved will come for her.

While she stood in her living room smoking a cigarette and wiping her cheeks, Boots said she never thought she’d see Mearan behind bars.

“I hope Mike Mearan never gets out,” Boots said. “Ever.”

Another sex trafficking victim who was involved with Mearan, who The Enquirer is not naming, also said she was fearful following his arrest.

“A lot of nervousness and fear kind of set in,” she said. “It’s not so much about even Mike, you know. Also about the other men that may be involved in all of this. You know, they’re going to want to protect themselves. And I’m just afraid of, really, the backlash.”

But she thinks it’s ironic, the image of Mearan – a man she said has been, to a degree, “untouchable” over the years – sitting in jail over the weekend. He’s put so many people in that position, she said. And with an ongoing investigation and potential trial, others involved in the conspiracy are bound to come out of the woodwork.

The woman said she “guarantees” sex trafficking has continued in Portsmouth since she got out of it, likely “up to the day he was arrested.”

“This community’s about to be rocked,” she said.

Mary Lawhon, 30, says she engaged in sexual contact with her probation officer, Mark Malone, while on probation from a driving under the influence conviction at the age of 18. She was not shocked by Mearan’s arrest, she told The Enquirer Sunday.

“I really feel it’s about time that someone has stepped up and took a look into real-life problems in this world that involve human trafficking,” she said. “It doesn’t discriminate by what kind of family you’re from or what your profession may be. Men and women you’d never expect are involved in this life.”

To other victims of human trafficking, Lawhon says: “There is support, don’t give up hope.”

Lawhon is currently serving a three-year sentence regarding theft and forgery convictions, according to jail records.

Mearan is scheduled to appear before a Scioto County judge Monday at 1:30 p.m. for arraignment.

He faces a total of 18 counts, all felonies. The charges surround alleged criminal activity that occurred between 2003 and 2018 involving six women, who are not named in the indictment.

More: Here’s what happens next in the Michael Mearan case

If convicted, he faces more than 70 years in prison.

“If there’s definitely guilt there, then yes, he needs to pay for his crimes,” Portsmouth

Others in town are not as neutral.

“I pray every day that not only Michael Mearan but the rest of the people that are trafficking our vulnerable women and children get what’s coming to them,” Kadie Lancaster said. “And I promise I will not stop, we will not stop. Our family will not give up. And I know the girls that have come forward are relentless, and they will not stop.”

2020-10-26
Previous Post: How to volunteer and donate in New Jersey during the coronavirus outbreak (10/25/20)
Next Post: Very Hungry Monkeys Look Very Pity But We Trying To Give Food