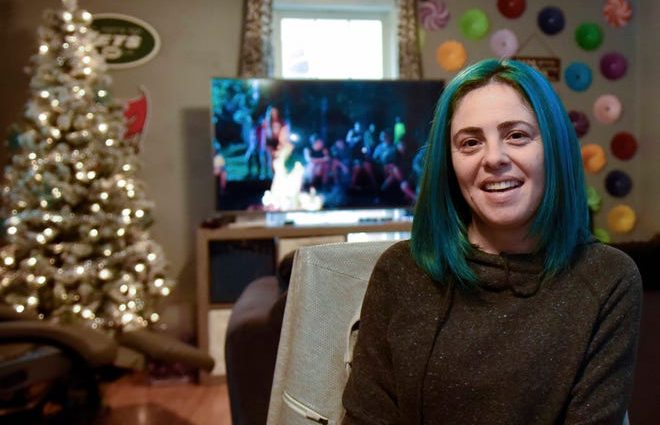 Since 2015, Lindsey Wofford has run a local nonprofit agency in Fayetteville that feeds and clothes homeless people.

Ironically, the same people she has helped at Seth’s Wish are now helping her through financial struggles related to the coronavirus economic downturn and a recent divorce, she said.

“I help them out; they help me out,” Wofford said. “It’s been a really cool relationship. Actually, it’s one thing I’m super grateful for. I’ve been able to connect with people in a way that I hadn’t before.’

More:We were evicted because of COVID-19 hardships. The system is broken.

Jeff Hudson, who is homeless and has been helped by Seth’s Wish, is now helping Wofford with household chores, like raking leaves, and any other help she needs.

“It’s like my family,” Hudson said of Seth’s Wish. “She was the only one that was there for me when she was feeding before a car ran through the (former Seth’s Wish) building. She is still helping me a lot.”

Wofford is among the millions of people across the country who are struggling to get by, juggling and delaying bill payments during the pandemic, according to a recent study.

Wofford said when she recently fell three months behind on her electric bill, the Fayetteville Public Works Commission demanded that she pay at least one month’s bill to keep her power on.

Carolyn Justice-Hinson, a spokeswoman for PWC, said customers who are out of a job right now or have had serious cuts in work hours should contact the utility.

“They need to contact us to see if we can assist with revised payment plans or establishing plans for balances that occurred since disconnects resumed,” she said in an email. “Since cutoffs have resumed, we’ve granted over 3,200 payment extensions in billing that occurred after July.”

She added that as of end of October, about 1,000 PWC customers had received help from utility assistance funds administered by Cumberland County Department of Social Services, Action Pathways and other local agencies.

A Seattle-based company that provides third-party bill and payment management, doxo.com, has released a survey detailing how the pandemic in seven months has affected the ability of people to keep up with their monthly bills.

It explains how people are limiting discretionary spending and expressing their worries about their financial future.

“Our data shows that more than half of all Americans have seen a reduction in income as a result of the COVID-19 crisis,” said Jim Kreyenhagen, vice president of marketing and consumer services at doxo. “It is therefore no surprise that many have also struggled to pay their bills over the past seven months since the pandemic started.”

He added that with no end in sight for economic recovery, “we’re seeing that consumers remain not only worried about their ongoing ability to pay bills but how the pandemic will impact their future financial health.”

Doxo’s study shows that more that 57% of Americans are reporting reduced income since the virus kicked in and that  42% of Americans have skipped paying one or more bills since the COVID-19 pandemic started.

Consumers have had to squeeze discretionary spending, with 70% of consumers delaying big purchases, doxo’s study said.

All of this sounds familiar to Wofford, who said before her recent divorce, her husband was the primary breadwinner while she ran Seth’s Wish.

Wofford formed the organization in honor of her son, Seth, who made a wish to help homeless people.

Now, Wofford is having to operate Seth’s Wish when she can out of her house and to cover her family’s bills as best she can by delivering food through DoorDash. She also is trying to care for her children, who are 10 and 15 years old.

“As long as I can DoorDash a couple of days a week, it keeps our heads above water,” Wofford said. “We had to apply for things like food stamps and all of that. It helps. We are able to maintain, and hopefully this Hope Program will pay soon.”

Wofford said she has given her landlord a letter informing her that financial help is coming to her family from the Housing Opportunities and Prevention of Evictions (HOPE) Program, a new statewide initiative that may provide rent and utility assistance to eligible low- and moderate-income renters experiencing financial hardship because of the economic effects of COVID-19.

She said she has been approved for assistance but the money has not made it to her yet.

Wofford said her landlord has been understanding but is understandably frustrated by her inability to pay. She pointed out that on Dec. 1, she will be three months behind on her rent.

“Nobody is coming out a winner in any of this,” she said.

Wofford said she doesn’t have much wiggle room when prioritizing which bills to pay first, as she needs a place for her and her children to live and electric and internet service for her children’s schoolwork. She said she has to have car insurance for her DoorDash job.

“We can’t pay any cable bills, so we watch the free (streaming) apps.”

“When I left my husband in March before COVID really started going downhill, I had a credit score of almost 800. I always paid bills on time,” she said. “My credit score was near perfect. Now, it’s in the 500 range, so it’s taken a huge hit.”

Justice-Hinson said PWC has worked diligently to help customers having financial problems, pointing out that at the beginning of August, there were more than 33,000 customers with which the company had established payment plans for a total amount owed of $11 million.

“In August, our reserves had dropped below the PWC’s 120-day target because of unpaid bills and COVID-19 operational expenses, but since August when disconnects resumed, that has gradually increased and we are just above 120 days,” she said.

Staff writer John Henderson can be reached at jhenderson@fayobserver.com or at 910-486-3596.