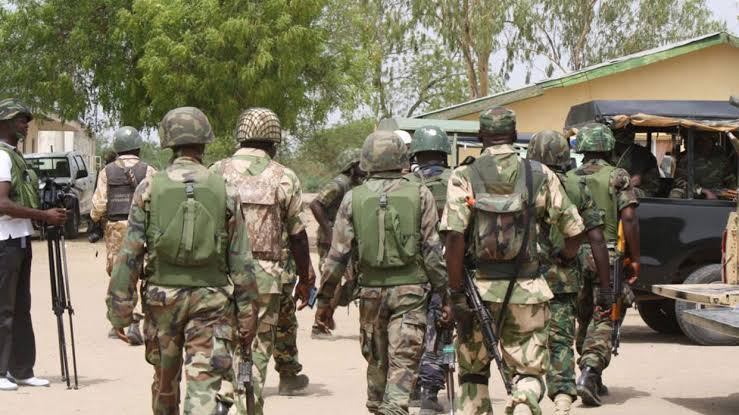 THE United States Department of State 2020 Trafficking in Persons Report ‎said the Nigerian government failed to take action against military officers who were involved in trafficking in Internally Displaced Persons camps and detention centres.

Military personnel and members of the Civil Joint Task Force, which is involved in the campaign against the Boko Haram insurgents in the North-East, were involved in sex trafficking of IDPs and female detainees, according to the report.
‎
‎‎The Trafficking in Persons Report, or the TIP Report, is an annual report issued by the U.S. State Department’s Office to Monitor and Combat Trafficking in Persons. It ranks governments based on their perceived efforts to acknowledge and combat ‎human trafficking‎.

‎The report stated that “widespread and pervasive corruption affected all levels of government, including the security forces, and undermined accountability for trafficking offences” in Nigeria.

‎Noting that “trafficking occurred in government-run detention centres and IDP camps”, the U.S. Department of State report said, “The government did not take adequate steps to investigate or prosecute military personnel or CJTF members complicit in trafficking – in particular sex trafficking of IDPs and female detainees – in the Northeast”. ‎

“During the reporting period, an NGO alleged 10 male soldiers in Giwa Barracks, including five who worked in the health clinic, coerced at least 15 female detainees into sex in exchange for food, soap, basic necessities, and the promise of freedom. ‎The government did not report investigating or holding officials accountable for sexual exploitation in Giwa Barracks,” the report added.

The U.S. Department of State added that a report by an international organisation in March 2020 documented that in more than 14 IDP camps, soldiers, CJTF, and police forced or coerced IDPs to have sex in exchange for food and freedom of movement in and outside of the camps.

“There were continued reports that camp officials and members of security forces, including some individual Nigerian military personnel, used fraudulent or forced marriages to exploit girls in sex trafficking and reports that the Nigerian military, CJTF, and other camp officials fraudulently recruited female IDPs for jobs outside of IDP camps and transported them to town for exploitation in sex trafficking.

“During the reporting period, an international organisation reported security officials transported IDPs to a hotel in Maiduguri allegedly for sex trafficking,” the report added. ‎

The National Agency for Prohibition of Trafficking in Persons (NAPTIP), a Federal Government agency set up to combat trafficking, did not initiate any investigations or prosecutions for sex trafficking of IDPs during the reporting period, according to the U.S. Department of State.

It added that the government did not publicly report any prosecutions or convictions for sexual exploitation or sex trafficking of IDPs, including children, and did not investigate, prosecute, or convict any government security officials, including military officials and CJTF members, alleged to have exploited IDPs.

The report further observed that the attitude of the Nigerian Army, which categorically denied that any of its personnel sexually exploited IDPs, impeded investigation of such reports.‎

Besides sex trafficking of female IDPs and detainees, the Nigerian Army was also accused of recruiting and using minors in support roles.

The report said, “An international organisation verified the Nigerian military recruited and used at least two children under 15 years old in support roles during the reporting period. Between April and June 2019, the Nigerian military used six boys between 14 and 17 years old in Mafa, Borno state, in support roles fetching water, firewood, and cleaning. In October 2019, the same international organisation verified the government used five boys between 13 and 17 years old to fetch water at a checkpoint in Dikwa, Borno state. In the past, the CJTF also reportedly used some child trafficking victims recovered from Boko Haram to lead CJTF and army personnel to Boko Haram camps, putting the children at serious risk for retaliation and denying them trafficking victim care.”

It added that the government did not report any investigations, prosecutions, or convictions for child soldiering offences, including of government officials who committed such offences.

Also, the U.S. Department of State noted that there was no evidence to show that the Federal Government investigated reports that 49 Nigerian soldiers deployed as United Nations peacekeepers to Liberia sexually exploited 58 women and children, including deploying some of them in sex trafficking, from 2003-2017.

Internal trafficking is prevalent with Nigerian traffickers recruiting victims from rural areas, especially the country’s southern regions, for exploitation in commercial sex and forced labor in domestic work in urban cities. While women and girls are victims of forced labor in domestic service and sex trafficking, boys are victims of forced and bonded labor in street vending, domestic service, mining, stone quarrying, agriculture, textile manufacturing, and begging, according to the report.

The informal education sector, particularly the Almajiri system, was also identified as a vehicle for trafficking as some teachers often abuse their students and coerce them to beg.

“Traffickers operate ‘baby factories’ – often disguised as orphanages, maternity homes, or religious centers – where traffickers hold women against their will, rape them, and force them to carry and deliver a child. The traffickers sell the children, sometimes with the intent to exploit them in forced labor and sex trafficking. In southern Nigeria, especially Lagos, some women drug and ‘rent’ their infants out to street beggars to increase the beggars’ profits. Nigerian traffickers take women and children to other West and Central African countries – including Mali, Senegal, Cote d’Ivoire, and Cabo Verde – as well as to South Africa, where they are exploited in forced labor and sex trafficking. Gabonese authorities and NGOs reported Nigerian labor traffickers exploited Nigerian victims in mechanic shops in Gabon. Nigerian women and children are recruited and transported to destinations in North Africa, the Middle East – including Saudi Arabia, Oman, and United Arab Emirates – and Central Asia, and exploited in sex trafficking or forced labor. West African children are subjected to forced labor in Nigeria, including in granite and gold mines. An NGO reported traffickers coerce Togolese victims to work in palm wine production in rural Nigeria. North Koreans working in Nigeria may have been forced to work by the North Korean government. Women from West African countries transit Nigeria en route to Europe and the Middle East, where traffickers force them into commercial sex. Nigeria’s ports and waterways around Calabar are transit points for West African children subjected to forced labor in Cameroon, Equatorial Guinea, and Gabon,” the report stated.

The U.S. Department of State also noted that there are allegations that IDPs displaced by violence in the Middle Belt were fraudulently recruited and exploited in domestic service and sex trafficking.

Following the curse laid on sex traffickers by the Oba of Benin and revocation of all juju administered on trafficked victims by Bini traditional priests in March 2018, the U.S. Department of State said there are reports that traffickers were now performing the juju ceremonies in neighbouring states such as Delta.

The report stated that Nigerians are exploited in Libya – by both Libyans and Nigerians – in forced labor in construction, agriculture, and commercial sex in Tripoli, Sabha, Benghazi, and Misrata.

“Lured by the promise of reaching Europe, traffickers keep victims in ‘control houses’ or ‘prostitution camps’ located on the outskirts of Tripoli and Misrata until they can repay travel debts; sometimes before victims repay the debt, traffickers sell them again. Some trafficking victims in Libya reported Nigerian embassy officials in Tripoli asked for payment before removing victims from Libyan detention camps,” the report said.

It added that ISIS has captured Nigerian women and girls in Libya and exploited them in sexual slavery.

“Such exploitation is a major concern across the Northeast, including in informal IDP camps and all of the 13 formal, state-run IDP camps in and around Maiduguri, the Borno state capital, which hosts IDPs affected by the ongoing conflict with Boko Haram and ISIS-WA. ‘Gatekeepers’ in control of some IDP camps, at times in collusion with Nigerian policemen and soldiers, reportedly force women and girls to provide sex acts in exchange for food and services in the camps. In July 2016, a Nigerian research organisation surveyed 400 IDPs in Adamawa, Borno, and Yobe states, and 66 percent said camp officials sexually abused women and girls, some of which constitutes sex trafficking.”

The activities of the Boko Haram was identified in the report as a major contributing factor to the high rate of trafficking in Nigeria. The terrorist organisation was accused of forcibly recruiting, abducting and using child soldiers as young as 12 as cooks, spies, messengers, bodyguards, armed combatants, and increasingly as suicide bombers in attacks in Nigeria, Cameroon, and Chad.

In 2018, Boko Haram used at least 48 children as human bombers, compared with 158 used in 2017 and the group continue to abduct women and girls in the northern region of Nigeria, some of whom they subject to domestic servitude and forced labor.

The US Department of State report said Boko Haram routinely forces girls to choose between forced marriages to its fighters – for the purpose of sexual slavery – or becoming suicide bombers.

“In some cases, Boko Haram forced child soldiers to marry one another,” the report said, adding that international organisations continue to express concerns about the arrest and detention of children by the Nigerian military for alleged association with Boko Haram.

The U.S. Department of State noted that an NGO reported that between January 2013 and March 2019, the Nigerian military unlawfully detained more than 3,600 children for alleged association with armed groups.