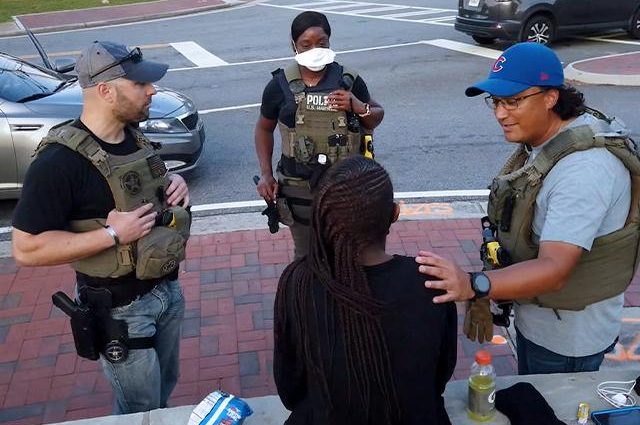 Trump Administration is making the fight against human trafficking a major priority. In addition to putting money behind the effort, a special unit US Marshals is making a huge difference.

In Ohio, a joint operation between federal and state officers recently recovered 35 missing children. A similar operation rescued 39 missing children in Georgia. Behind all this success is a unit of the US Marshals Service. The Sex Offender Investigations branch is made up of only three men, working overtime to save as many kids as they can.

“When I assumed the position of commander of the sex offender investigations branch, my eyes were opened. There are over 430,000 missing kids a year in our country,” said Floriano Whitwell of the US Marshals Service.

Of those, at least 65,000 are victims of the commercial sex industry.

Ongoing riots and violence against federal courthouses in Portland and elsewhere, however, are taking agents away from this important work.

But it’s a zero-sum game,” Whitwell said. “In order for us to deploy these resources, it detracts from other mission sets that are equally as important. Our leadership is very passionate and supportive of this initiative, and we’re trying to throw as many resources at it as we can, but the reality is, we’re just scratching the surface.”

These operations are also complicated because those rescued need special care.

“Historically we’re cops, I’m mean we catch bad guys. But we’re catching good people now. We’re catching kids. What resources do we need to have in place? Because it’s not as simple as just turning these kids over to somebody. And so we spent a lot of time talking with our partners to try to get these assets in place,” Whitwell said.

Because of the COVID crisis and the de-fund the police movement, many agencies don’t have the time or resources to track down child predators. And that’s where the body of Christ comes in. There are ministries who are putting in the legwork to track down these predators and build cases that will give authorities everything they need to take these guys off the streets. One of them is All Things Possible Ministries, led by former Army Ranger, Jeff Tiegs.

“They need help on the front end identifying the victim. They need that level of probable cause, reasonable suspicion. That’s what we offer law enforcement,” Tiegs said. “So we figure out who those girls are who are being sold and potentially who their trafficker is and we push that information to law enforcement to take action. And then they will conduct an operation, a sting and they will offer her a new life, a path to freedom.”

And what they find is often chilling.

“There are particular traffickers that will target Christian girls,” Tiegs told CBN News. “To get the girl that comes from a broken, abusive relationship, that didn’t stroke his ego. But for him to be able to pluck a pretty young woman from a Christian family in the suburbs and turn her out to sell her body for sex through him, to be trafficked, that was an ego boost for him.”

The Trump administration is taking action to put a stop to these heinous crimes. US Attorney General William Barr recently announced that over $100 million in grants is being awarded across the country targeted at human trafficking prevention initiatives.

Those on the front lines of the battle have come to realize law enforcement isn’t the ultimate solution.

“We as believers have to do a better job of protecting our young women,” said Tiegs. “Parents have to talk to their daughters very candidly about what’s out there, especially in this Christian bubble that we live in we don’t fully appreciate the evil that’s out there and the evil that’s trying to work its way into our lives.”

“We as a society need to look at this large number and start deploying resources and asking questions as to why there are so many missing kids,” Whitwell added. “We are very happy about all our recoveries but there’s a much larger problem that needs to be addressed and addressed holistically.”