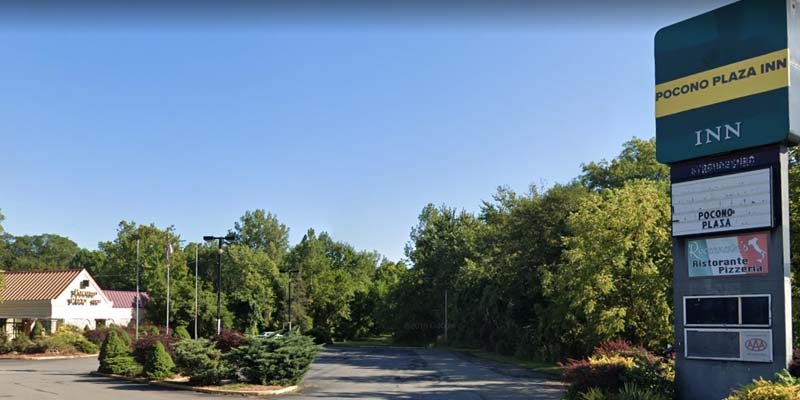 BARTONSVILLE, PA  – The United States Attorney’s Office for the Middle District of Pennsylvania announced that Faizal Bhimani, age 43, and Nazim Hassam, age 64, both of Bartonsville, Pennsylvania, Om Sri Sai, Inc., a Pennsylvania corporation, and the Pocono Plaza Inn hotel, formerly known as the Quality Inn, located in Stroudsburg, Pennsylvania were convicted on October 23, 2020, of sex trafficking and drug trafficking charges after a two-week jury trial.

This is the first time a hotel, a hotel owner, or a hotel general manager have been convicted of criminal sex trafficking offenses for aiding others to engage in that activity in Pennsylvania.

According to United States Attorney David J. Freed, Om Sri Sai, Inc., a company that owned and operated a Howard Johnson hotel located in Bartonsville, Pennsylvania, and Faizal Bhimani, the general manager of that hotel, were both convicted of aiding and abetting sex trafficking by force, fraud, and coercion, and sex trafficking conspiracy, as well as drug trafficking conspiracy and managing a drug-related premises.  The jury also found the Pocono Plaza Inn guilty of Managing a Drug-Related Premises, and Nazim Hassam, part-owner and Vice President of Om Sri Sai and managing shareholder of both hotels, guilty of drug trafficking conspiracy and two counts of managing a drug-related premises.

The jury further found that all property owned by Om Sri Sai, Inc. was property that facilitated the company’s sex trafficking and drug trafficking crimes, and is therefore subject to criminal forfeiture.

The evidence at trial, presented through more than 35 witnesses and over 150 exhibits, established that the Howard Johnson Hotel in Bartonsville was a safe haven for criminal activity between 2011 and 2019.  Bhimani, as manager, made rooms available for sex traffickers and drug dealers, and at times took payment for the hotel directly from the proceeds of criminal activity.  Bhimani also traded discounted and free rooms for sex, which traffickers would direct their victims to provide.  Dozens of women were compelled by multiple traffickers, sometimes called pimps, to conduct prostitution in the hotel either by physical force, threats, false promises, or coercion, including through blackmail and drug addiction.  Women who were addicted to heroin, crack, or other controlled substances were provided with just enough drugs to keep them working, and pimps used their addictions and the threat of withdrawal to control them.  Several admitted sex traffickers testified at the trial, explaining how they used these various methods to compel women to sell sex and turn over all of the proceeds.  Multiple survivors also testified that they were required to follow the traffickers’ rules, were forced to rely entirely on the traffickers for food, clothing, even hygiene products, and they were often punished for violations with violence, including sexual assault.

The evidence showed that Bhimani was closely associated with several of these traffickers, and knew of the methods used to compel the victims to have sex for money.  Other employees at the hotel knew as well, and the evidence showed that at least two other employees engaged in sex with victims, including Hassam.  Bhimani also warned sex traffickers and drug dealers when law enforcement were present at the hotel, including during the manhunt for Eric Frein in 2014.  Several admitted sex traffickers and drug dealers testified to successfully evading detection by police thanks to warnings from Bhimani.  The hotel allowed known criminals to check in under assumed names or even street names, and Bhimani and Hassam both took steps to obstruct police efforts to locate suspects.

Evidence at trial also showed that the Pocono Plaza Inn, known as Quality Inn before losing that franchise, was also riddled with drug activity.  Police officers testified to multiple overdoses, some resulting in deaths, as well as numerous drug seizures, undercover drug purchases, and arrests at each hotel over a period of several years.  The hotels were both known by SARPD officers as high drug crime areas.  Evidence showed that a bartender at the Pocono Plaza Inn sold cocaine and heroin right over the bar, and that when the manager was alerted to that fact by another employee and a patron’s online review, she did not fire the bartender or notify police.  In 2016, another employee who lived at the hotel was arrested for heroin trafficking the day after a woman died of an overdose in his room.

In all, forty defendants have been convicted federally as a result of this investigation, many of whom trafficked women and drugs in the Bartonsville Howard Johnson and the Pocono Plaza Inn.  Other defendants have been charged and convicted in state courts.  The investigation has resulted in the dismantling of the “P Stones” as well as a second gang, the “Brick City Brims,” and the disruption of two more, the “Blood Stone Villains” and the “Bloodhound Brims.”  Investigators seized multiple kilograms of heroin and cocaine, as well as quantities of fentanyl, cocaine base (“crack”), methamphetamine, marijuana, and MDMA (“molly”), and took at least 10 illegal firearms off the streets.

Notable among the convictions in this investigation are:

“This investigation is an outstanding example of how the Task Force model works as a force multiplier,” said U.S. Attorney Freed.  “When federal agencies like the FBI join with local law enforcement agencies, officers who know their local jurisdictions better than anyone, we can accomplish far more than either can do on their own.  My office and the federal agencies who fuel OCDETF are proud to stand side by side with our brothers and sisters in state and local law enforcement, and grateful for their invaluable efforts and insights that have made this six-year investigation a success.  This was a novel prosecution, and the first time a hotel or its manager or owner have been charged with and convicted of sex trafficking in Pennsylvania.  We hope this will serve as a warning to any other person or company in a position to facilitate or profit from forced prostitution: don’t.  Sex trafficking cases are among the most serious we prosecute, and we will bring to bear the full resources of the Department of Justice to investigate and prosecute those who traffic women and girls, along with those who profit from it.”

This case was brought as part of a district wide initiative to combat the nationwide epidemic regarding the use and distribution of heroin.  Led by the United States Attorney’s Office, the Heroin Initiative targets heroin traffickers operating in the Middle District of Pennsylvania and is part of a coordinated effort among federal, state, and local law enforcement agencies to locate, apprehend, and prosecute individuals who commit heroin related offenses.

This case is also part of Project Safe Neighborhoods (PSN), a program bringing together all levels of law enforcement and the communities they serve to reduce violent crime and make our neighborhoods safer for everyone. The Department of Justice reinvigorated PSN in 2017 as part of the Department’s renewed focus on targeting violent criminals, directing all U.S. Attorney’s Offices to work in partnership with federal, state, local, and tribal law enforcement and the local community to develop effective, locally-based strategies to reduce violent crime.

2020-10-28
Previous Post: A Guide to Global Philanthropy – The Palgrave Handbook
Next Post: The Bill and Melinda Gates Foundation Campus and Visitors Center