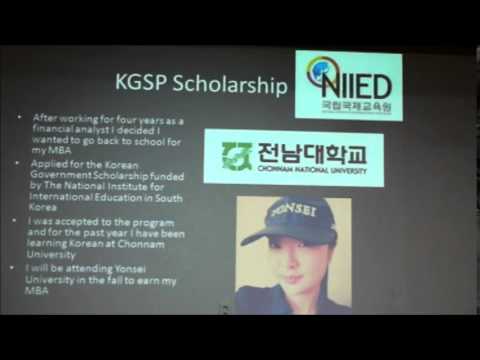 Topic My Life as a Korean American Student

My mother and father were born in Seoul, where they fell in love and decided to get married. In 1980 they moved to the U.S.A. due to the escalating tension between the government and the citizens of South Korea. My oldest sister was born in Seoul, how-ever, my middle sister and I were born in the U.S.A. I attended elementary, middle and high-school in a small town called Amherst, Massachusetts. I attended The University of Hartford; a private University in West Hartford, Connecticut. As a requirement for grad-uation every student during their Junior year had to obtain an Internship outside of the University. I was fortunate enough to land an internship at the Nation’s largest health insurance company called Unitedhealthcare. During my time I was able to work with numerous Senior Level Executives and they were so impressed that I was offered a job with the company before I graduated. I accepted the job offer and started working at the company post-graduation. After working for four years as a financial analyst I decided I wanted to go back to school for my MBA. I also had the dream of moving to South Ko-rea in order to learn more about my culture and ancestry. After doing some research I was able to find a scholarship that met both my dream of furthering my education in South Korea. That is how I came to apply for the Korean Government Scholarship fund-ed by The National Institute for International Education in South Korea. I was accepted into the program and for the past year I have been learning Korean at Chonnam Nation-al University. I will be attending Yonsei University in the fall to earn my MBA. I have been taking Korean classes for about 7 months, however, growing up with Korean par-ents I had already been familiar with the language so it has not been too difficult for me. I did not feel comfortable with accepting a scholarship without giving something in re-turn to the citizens of South Korea. So during my study in Gwangju I have been volun-teering my time at Haeinsa Temple. I genuinely love my time with the children and feel as though I am not just the teacher, but also a student. I hope that I can help them to build a bright future and will continue to keep in contact with the children even when I move to Seoul. In all honestly it was a bit difficult for me to get used to living in Korea due to many cultural differences, however, I feel very blessed to have been given this opportunity and already feel a deep connection to my ancestors here.

2020-11-20
Previous Post: Give ​two-legged wheelchairs to give poor workers who Cambodian-sponsored in the USA/Luggage Cart
Next Post: The Value in Giving Episode 3 – Bill & Melinda Gates Foundation, Victoria Vrana