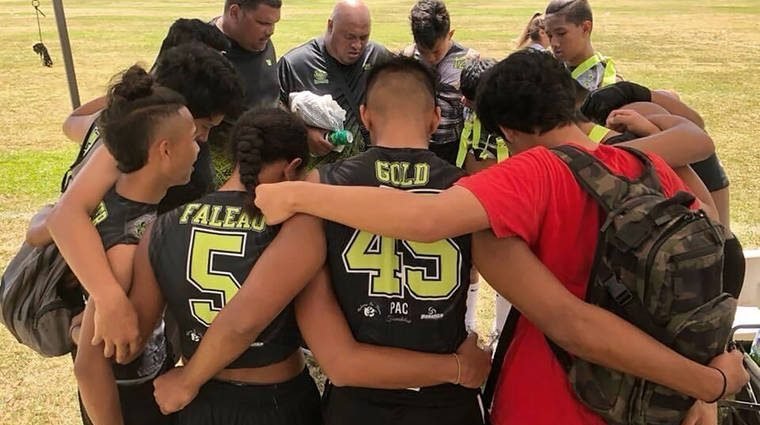 Honolulu football coach Willie Talamoa bought his players cleats, drove them to practice and often stayed late to talk with those having trouble in school.

For Talamoa, his actions weren’t just about football. They were about helping the young people in the hardscrabble neighborhood of Kalihi where he grew up get the attention they deserved.

“His philosophy was, the more kids that are at practice with us, the less kids that are out on the streets of Kalihi,” said fellow coach Kinohi Aki, who grew up with Talamoa in Kalihi’s public housing developments.

Now, the community is mourning Talamoa’s death from COVID-19, remembering the 36-year-old as a mentor and father figure who volunteered countless hours to give young people the opportunities he didn’t have.

Talamoa played football at McKinley High School in central Honolulu, then at Dixie State in Utah where he was recruited as a defensive lineman. His interest in coaching grew after he injured his knee in college and had to stop playing.

He worked as a security guard after returning to Hawaii and started coaching the Kalihi Disciples, a team with 8th and 9th graders that’s part of a church league, around a decade ago. In 2015, he became an assistant coach at Farrington High.

Most recently, he coached seven-on-seven Pylon football — a form of touch football played on a smaller field — taking his team to Las Vegas to compete in February.

Aki said Talamoa offered kids an alternative — sometimes the only one they had.

When he saw teens and pre-teens hanging around, he would ask them what they were doing and where they were going. After hearing responses like “‘Ah, nothing’” and “‘Oh, cruise’” he’d invite them to join his workouts.

“Next thing you know, the kid’s asking to try out for the football team,” Aki said.

Randall Okimoto, head coach at Farrington for 16 years until 2018, including several with Talamoa as an assistant coach, said it’s not easy for coaches to establish strong relationships with players in Kalihi.

Many are experiencing hardships outside school, in some cases because they come from single-parent homes or their family is struggling with money, he said.

“It’s just tough. So our kids will put up a defense mechanism where they’re not going to let you in,” said Okimoto, who also grew up in the neighborhood.

Talamoa began coaching many players in youth leagues, giving him a head start on those relationships. He repeatedly showed players he cared. Along with cleats, he bought them mouthpieces, gloves, towels, socks and other equipment.

He paid dues on their behalf, enabling them to play sports. Sometimes he used his own money, sometimes money from fundraisers.

Talamoa was “training me and coaching me to become a better player and person in life,” said Raymond Millare, an 18-year-old senior at Farrington and one of the eight to 10 players Talamoa would routinely pack into his SUV to take to practices.

If Millare was slacking in school, Talamoa prodded him to do better. He reminded Millare to help at home and love his parents and family.

“I can just remember him at the stoplight at my house, listening to his music,” Millare said. “I can hear him honking his horn and that’s a sign for me to know, ‘Oh, Coach Willie is here. It’s time to get to work.’”

Knowing how much players trusted Talamoa, some parents asked him to talk to their children when they struggled in school. “The first thing Willie would say is ‘I got ‘em. I got this.’” said Aki. Then, he’d talk with the child well after practice ended.

Talamoa’s mother is Native Hawaiian and his father Samoan. Samoans and other Pacific Islanders, not including Native Hawaiians, account for just 4% of the state’s population but 27% of those who have tested positive for COVID-19.

That’s a larger share than any other demographic. Officials say one reason for the disparity is the fact that many Pacific Islanders work in jobs that require them to be in the community, like the food service industry.

Other risk factors include large, multigenerational families living in tight quarters and inadequate educational outreach to Pacific Islanders regarding the virus.

The city of Honolulu has lately developed options for patients to isolate at hotels away from their families if needed. It has also launched education campaigns in Samoan, Tongan and other Pacific Island languages.

Talamoa’s girlfriend, Leilani Legatasia, said she believes Talamoa caught the virus at a men’s homeless shelter where he had been working as a guest services assistant. The shelter was dealing with a coronavirus outbreak when he got sick.

After testing positive on Aug. 13, Talamoa immediately checked into a hotel the shelter was using to house infected staff. Talamoa’s cousin, Kainoa Talamoa-Elderts, said he didn’t want to pass it on to Legatasia and their 10-year-old daughter.

After his death, reminders of Talamoa’s commitment to Kalihi’s children arrived in the mail — cleats he ordered for his players from eBay, Legatasia said.