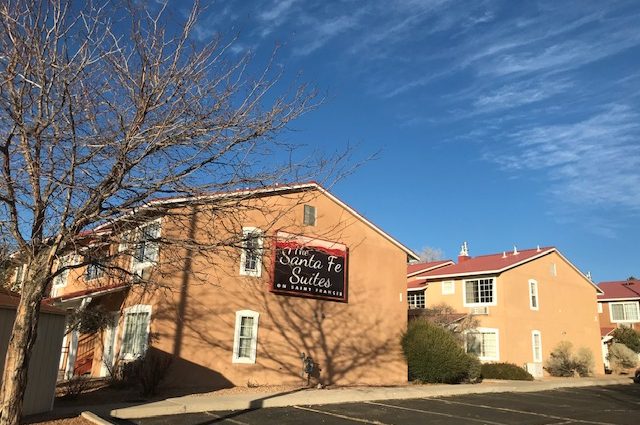 Santa Fe Suites at St. Francis Drive and Zia Road is slated to become housing for the homeless and those who can’t afford market rental rates. (Mark Oswald/For Journal North)

Santa Fe appears to be making a good move with plans to acquire a suites hotel in the city’s southeast corner to provide housing for the homeless and those who can’t afford our city’s high market-rate rents.

The project – which will get $2 million from city government’s share of pandemic-relief CARES Act funding – certainly isn’t a silver bullet that will solve Santa Fe’s huge affordable housing issues. But it’s small step in the right direction.

The 122-unit Santa Fe Suites hotel tucked in behind the Albertson’s supermarket at St. Francis Drive and Zia Road would become what’s supposed to be a self-supporting nonprofit business, more or less.

As pandemic relief, 42 of the hotel’s 320-square-foot units – which have kitchenettes with refrigerators and microwaves – would be set aside for working people who’ve lost income during the COVID-19 outbreak.

Another 40 are set aside for low-income folks who simply can’t afford to pay rent in Santa Fe. The final 40 rooms are designated for chronic and veteran homeless people, and include such services as health care and counseling.

Monthly rents, with government subsidies, are expected to be in the $700 range, some higher and some lower, to generate regular income for the project. The city insists it will not be the same as a homeless shelter that doesn’t pay its own way.

Santa Fe will be partnering with a national nonprofit called Community Solutions and its Built for Zero campaign, an effort by 80 local jurisdictions, including Santa Fe, to end homelessness in member communities.

Community Solutions, based in New York, seems to know what it’s doing. The organization has achieved success in other cities and in July was named one of six finalists for the esteemed MacArthur Foundation’s #100andChange competition. The winner will receive a $100 million grant to fund a proposal “that promises real and measurable progress in solving a critical problem of our time.”

A notable part of the Built for Zero program (the name is based on the goal of eliminating homelessness in member communities) is that it measures results not by achieving vague or subjective goals, but is based on keeping track of actual homeless people, “by name, in real time,” in participating cities and counties.

“Built for Zero communities measure success by the total number of people experiencing homelessness, not by program outcomes,” Community Solutions says on its website. “Data enables communities to rapidly test new ideas and understand if those efforts are working.”

A study presented at City Hall along with the Santa Fe Suites proposal identified 259 households as being homeless here, although Affordable Housing Director Alexandra Ladd said the number is probably closer to 400.

Community Solutions is expected to work on financing for the project beyond the city’s $2 million from the CARES Act and another $580,000 in federal Housing and Urban Development Department funds. Local investors interested in making a positive impact on the community will be sought. Social services providers also are expected to be involved at the hotel property, which, at least from the outside, looks like it has been impeccably maintained.

Things are happening fast. The city needs to spend its CARES Act money by the end of December, so closing on the sale of the Santa Fe Suites property has to take place soon. Community Solutions will be the initial owner.

An interesting note on this proposal for affordable/homeless housing is its physical location relative to St. Francis Drive, one of Santa Fe’s demographic demarcation lines. Santa Fe Suites is on the eastern, upscale side of that line, albeit in an already developed commercial complex that is well buffered by fencing and the surrounding terrain. No one has yet spoken out on whether the new use for the hotel building will be welcomed to the neighborhood.

Based on what we know so far, we hope it will be. Santa Fe needs to turn its sympathy toward the homeless and those struggling to find shelter into expanded action.