How adoption changed these families’ lives 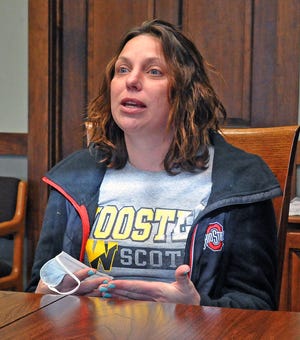 WOOSTER When Brandi Humphrey found out she was pregnant, she wanted to give her baby a better life.

As someone who has struggled with addiction for 15 years, the Wooster resident wasn’t in the right place to raise another child. She has six children — none of which lived with her. The road to sobriety is a difficult one, and Humphrey was at the beginning of her journey.

Humphrey knew the baby’s best chance was with another family, which is why she chose adoption.

“I was new in recovery,” Humphrey said. “I was so scared that I was going to fall back into that. I didn’t want to put a baby through that. I decided right from the beginning I was going to do adoption.”

November is National Adoption Month. The Pregnancy Care Center of Wayne County receives funds each year from Choose Life license plates. The revenue from plates purchased in the counties served by the agency are used to help cover expenses for a mother who is planning to place her baby for adoption.

Karen Noe, executive director of the pregnancy center, said the agency receives between $1,600 and $2,200 annually through the Ohio Department of Health’s Choose Life Fund.

Sixty percent of the money goes toward expenses to help the mother through her pregnancy, including assistance with clothing, food, medical expenses, transportation and housing, Noe said. The remaining 40% is used for advertising, she said.

If a mother who is receiving Choose Life Funds changes her mind about the adoption, she does not need to pay back those expenses, Noe said.

Humphrey was attending parenting classes to get some of her children back home with her when staff told her about the funding.

“It’s not even just the money it’s the support and the constant love around me,” she explained. “It’s like family. They keep me wanting to do good.”

In a year and a half, Humphrey, who was homeless, got a place of her own. Two of her children are living with her again, and she’s attending virtual graphic arts classes through Independence University.

Through it all, she remains sober.

When going through the adoption process, Humphrey wanted to be able to choose the family who adopted her baby. Six months ago, Humphrey gave birth to a boy.

The adoptive mother works with small children and told Humphrey she believes a mom doesn’t have to give birth to love a child, Humphrey recalled. Her smile lit up the room, and Humphrey knew her baby boy would grow up in a happy and loving home.

From the time Humphrey was three months pregnant, the adoptive parents were involved with the pregnancy even attending ultrasound appointments.

When it came time to give them the baby, it was a bittersweet moment, Humphrey said.

“It was hard, but at the same time seeing the happiness on the mom’s face made it worth it, she said. “(I knew) in my heart that he was going somewhere where he would be in great hands.”

Humphrey’s struggle with addiction influenced her to choose adoption.

“I didn’t want to have that baby and fall in love and lose him because of addiction,” Humphrey said. “I wanted to give him something better.”

Noe has been the executive director of the Pregnancy Care Center for more than 30 years. She began volunteering with the center shortly after it opened in 1984.

The center provides support to anyone who is going through the life changes that pregnancy can bring such as pregnancy tests, ultrasound exams, STD testing and treatment, parenting classes, and adoption and abortion education.

Noe was propelled into her career through her own experiences going through adoption. She adopted her eldest daughter 40 years ago.

“That’s really what fueled me to come here,” she said. “(Her) mother was homeless. She had nothing. We couldn’t help her back then. Everything was a closed adoption. My heart was to help women like my daughter’s mother.”

Making the decision to put a baby up for adoption is difficult, Noe said. Those mothers are doing a brave and selfless act, she said.

It changes your life when you long to be a mother but are told it likely wouldn’t happen for you, said Noe, who later had two biological children after she adopted her eldest.

Choosing adoption is “the greatest gift of all” for a woman who wants to have a family but cannot have children, Noe said.

Kelly Schlabach, an East Union Township resident, knows what it is like to receive a child through adoption.

The 45-year-old adopted her son, Brayden, 12 years ago when he was 5 weeks old. She and her husband, Sheldon, adopted their daughter, Parker, six years ago.

Building a family was not an easy road for the Schlabachs. The couple tried fertility treatment, and Kelly Schlabach lost a child when she was six months pregnant. Due to health concerns, doctors recommended they not try to conceive again. That’s when the Schlabachs considered adoption.

Brayden Schlabach’s parents were both teenagers when they were expecting him. His mother was a recipient of the Choose Life Funds.

Kelly Schlabach said she’s happy both of her children have the opportunity to know their birth parents. The family met with Parker’s mother earlier in November.

Though their biological parents went on to get married and have families, Schlabach said her kids can know their birth parents still carry love for them in their hearts.

“It’s nice to know that even after I was adopted, they still love me,” Brayden Schlabach said.

Choosing adoption was the most selfless thing they could do as young parents, Kelly Schlabach said.

“It’s been the most amazing thing because that’s how our family started,” Schlabach said. “That was a huge desire for Sheldon and I. We always knew we wanted to be parents. God brought it about in a different way than what we had originally thought, but it has been the biggest blessing.”

2020-11-27
Previous Post: The Evolution of Human Trafficking During the COVID-19 Pandemic
Next Post: Tallahassee man sentenced to 25 years for sex trafficking of minor