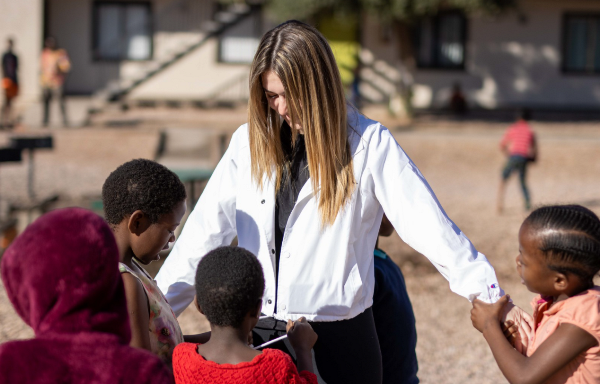 Amela Duric has been mindful of the blessings of volunteerism literally all her life — first as a recipient of services and, more recently, as a provider of them.

The 28-year-old Ahwatukee woman comes full circle this month in receiving the Spirit of Tempe Karma Award from the Tempe Community Council at the Don Carlos Humanitarian Awards virtual event on Oct. 14. The award, given annually to a notable volunteer who has significantly served Tempe, is connected to the concept that one drop of kindness has ripple effects throughout the community for generations.

“Amela Duric tirelessly and selflessly serves others,” said Octavia Harris, TCC’s executive director. “She is an example of what makes Tempe special— you can find community here no matter where you come from.”

Where Duric came from is Bosnia, from which her family was forced to flee when war broke out in 1992. She spent the first seven years of life as a refugee, bouncing around cramped living quarters in Austria and Germany. The family moved every other year, and Duric grew up believing this is what everyone did.

When her parents, older brother and she emigrated in 1999 to Chicago, with four suitcases, a few photos and the clothes on their backs, they didn’t know English or anyone in America. A family sponsor set them up in an apartment, donated household items and helped them learn English, enroll in school and find jobs. Kind folks took the children to museums and exposed them to life outside their bubble. 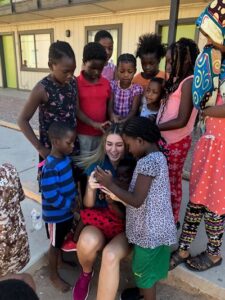 “If I hadn’t had those resources growing up, I don’t know if I would be where I am today,” said Duric whose family moved to Tempe in 2002.

“I was the weird kid who didn’t speak the language, and that made things interesting for sure,” she said. “But it allowed me a freedom and the ability to become who I am. I connected with other ‘outsiders.’”

After graduating from McClintock High and enrolling at Arizona State University, where she eventually earned a bachelor’s in sociology and a master’s in psychology, Duric visited Bosnia for a family reunion. It was bittersweet — she was grateful to her parents for the life they’d given her in the U.S., but she also saw what she missed by not growing up around extended family and her native culture and language.

“This trip made me wonder about everyone — why are they who they are, why are they where they are,” said Duric, a human resources coordinator. “And I wondered what I could do to give back.”

She started with Hands On Greater Phoenix, helping at a temporary shelter for women and children experiencing homelessness.

Duric led projects to clean up neighborhoods, paint over graffiti, feed veterans and help young adults. With Salvation Army, she both trains volunteers and organizes activities and games for homeless children.

And then, she joined the Welcome to America Project, which since 2001 has helped settle more than 2,000 refugees in Phoenix. It was a perfect match was made.

“The first time I entered this one-bedroom apartment with a family of six living there, I was, “This was me, this is how I was raised.’ This is my purpose, my passion. This is who I am,” Duric said.

She has built close ties with people from Iraq, Syria, the Democratic Republic of Congo and Afghanistan, and is especially drawn to their kids. She also has volunteered in Peru, building a greenhouse for a local school, and in Ghana, teaching English and science at an orphanage.

The Tempe award means everything to Duric.

“It’s extremely humbling and surreal,” she said. “It makes me want to expand the platform that I have and bring light to these types of causes, to say, ‘You can get involved.’ Let’s focus on the collective ‘we,’ and be a fellow neighbor, a fellow sister or brother.”

Tickets to the Don Carlos Humanitarian Awards ceremony and after-party video/chat are available through Oct. 11 at tempecommunitycouncil.org.