Editor’s note: This story contains graphic details of sexual violence and abuse. The identity of the victim who shared her experience with us has been protected in the story below.

FLINT, Michigan — When Ella was 16-years-old, her brother used her as “payment” to a 41-year-old man in exchange for a family business debt. She spent the next decade of her life being trafficked by her brother and eventually, her husband, who brought her to the United States. Ella’s husband continued to traffic and abuse her after she immigrated.

“When I met my husband, he was in Eastern Europe meeting some friends,” she said. “There is a twenty-some year gap between us, but I thought because I met a more mature man he would be able to protect me and get me away from what I was experiencing at home.”

The abuse continued after their daughter was born. Ella’s husband continued to extort her for money and demanded she provide sexual services to other men while threatening her life.

“My husband had guns in the house and made me work,” she said. “I was afraid for my life. My daughter was born two years later and I endured a lot of things because I was afraid for her life and mine.”

Ella’s daughter witnessed her father play Russian Roulette and abuse her mother throughout her childhood. When their daughter was 8-years-old, she attempted to kill herself with her father’s gun. Ella took her to a therapist, and that is when her and her daughter’s lives started changing drastically.

“I didn’t realize I was actually being sex trafficked until I went to see a therapist in 2018,” she said.

That is not uncommon — sex trafficking is a violent crime often hidden in plain sight in Flint and communities all over the world.

“You think there is nothing out there to help you survive,” Ella said. “And a lot of women are hooked on a lot of different substances in order to cope with what they have to do.”

Raising awareness and providing resources and support to local organizations fighting trafficking and its impact is essential to the safety of vulnerable members in the community.

“It can be all around you and you don’t even know it,” Ella said. “From children to women, they disappear every day. A lot of people are promised different jobs because of their situation with their family. They’ll take it and they don’t even know what they’re getting themselves into. This isn’t just in the U.S. It is everywhere.”

The world of sex trafficking is dark and often not thought about much in the lives of many Flint residents. Genesee County Sheriff Chris Swanson said creating awareness of how rampant trafficking is here and everywhere is vital.

According to Michigan Incident Crime Reporting a total of 1,188 commercialized sexual offenses were reported in 2019. 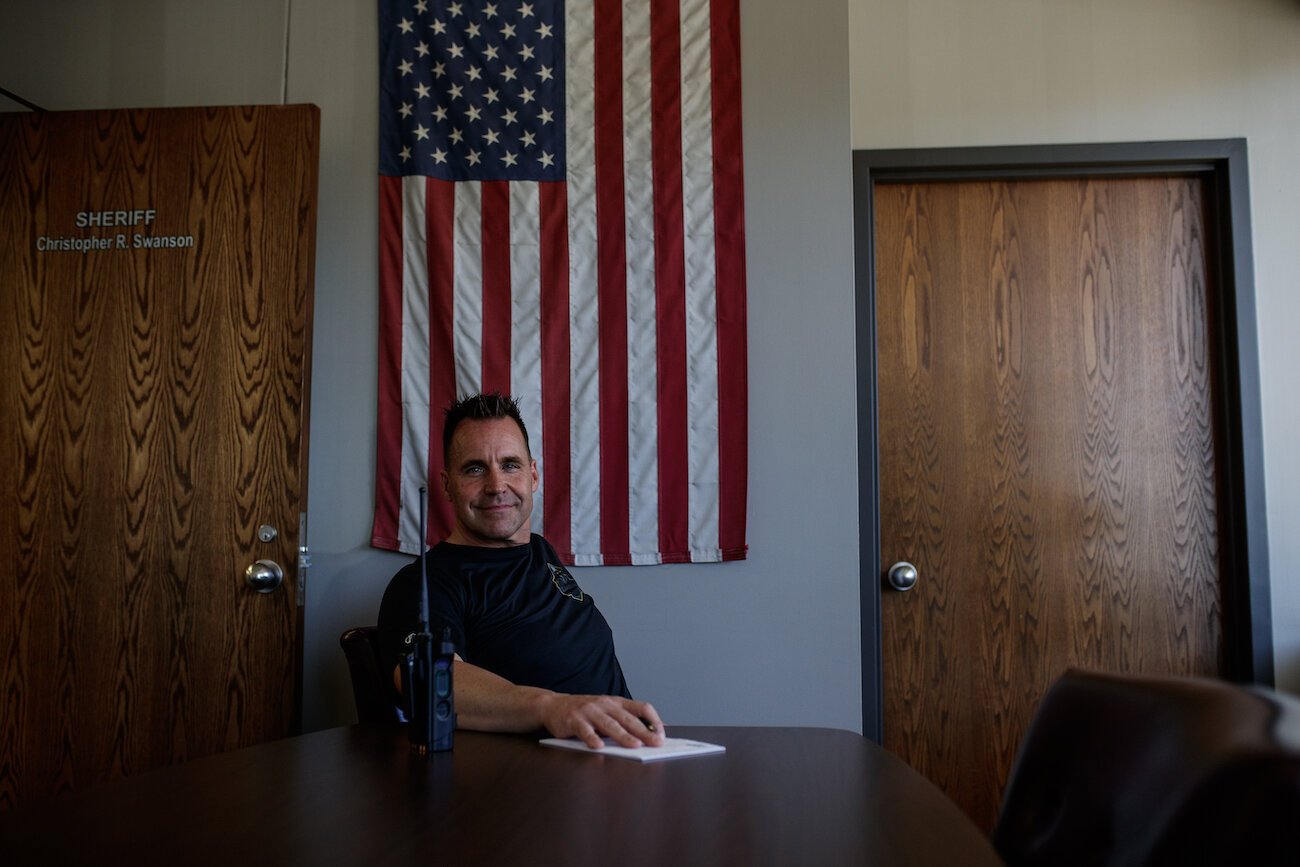 Genesee County ranks seventh with the highest number (a total of 238) of sexual offenses reported in 2019 in the state of Michigan. However, statistics alone do not provide enough insight into the horrific experiences trafficked victims undergo.

“We found three little girls that were from Detroit, (one) 15 and two 14-year-olds,” Swanson said. “They were being trafficked by a house mom from Lansing, to Toledo, to Detroit, to Flint, and to Kalamazoo. We got them in Flint right off Linden Road. They had been pimped since January and we got them in April this year. So even during all of COVID, we were out there finding people. Each one of them had been sold individually 400 times.”

In Flint, the YWCA, Genesee Human Oppression Strike Team (GHOST, led by the Genesee County Sheriff’s Department), and the Voices for Children Child Advocacy Center are among the organizations that coordinate to fight against trafficking of adults and children.

In 2018 a total number of 424,066 incidents of missing children and young people were entered into the NCIC by the FBI. By the end of 2019, a total of 85,459 of these records of missing children remained active. And according to the Polaris Project, 1 in 7 children reported to the National Center for Missing and Exploited Children become victims of sexual trafficking.

In Flint the numbers are tangible for Claudnyse D. Hollman, president and CEO of Voices for Children. “In a given year we see 800-900 kids. We provide coordinated services,” Hollman said. “We are the only agency that coordinates services for children who are sexually abused, physically abused, neglected, human trafficked, and witnesses to violence. Last month we had 58 new kids.” 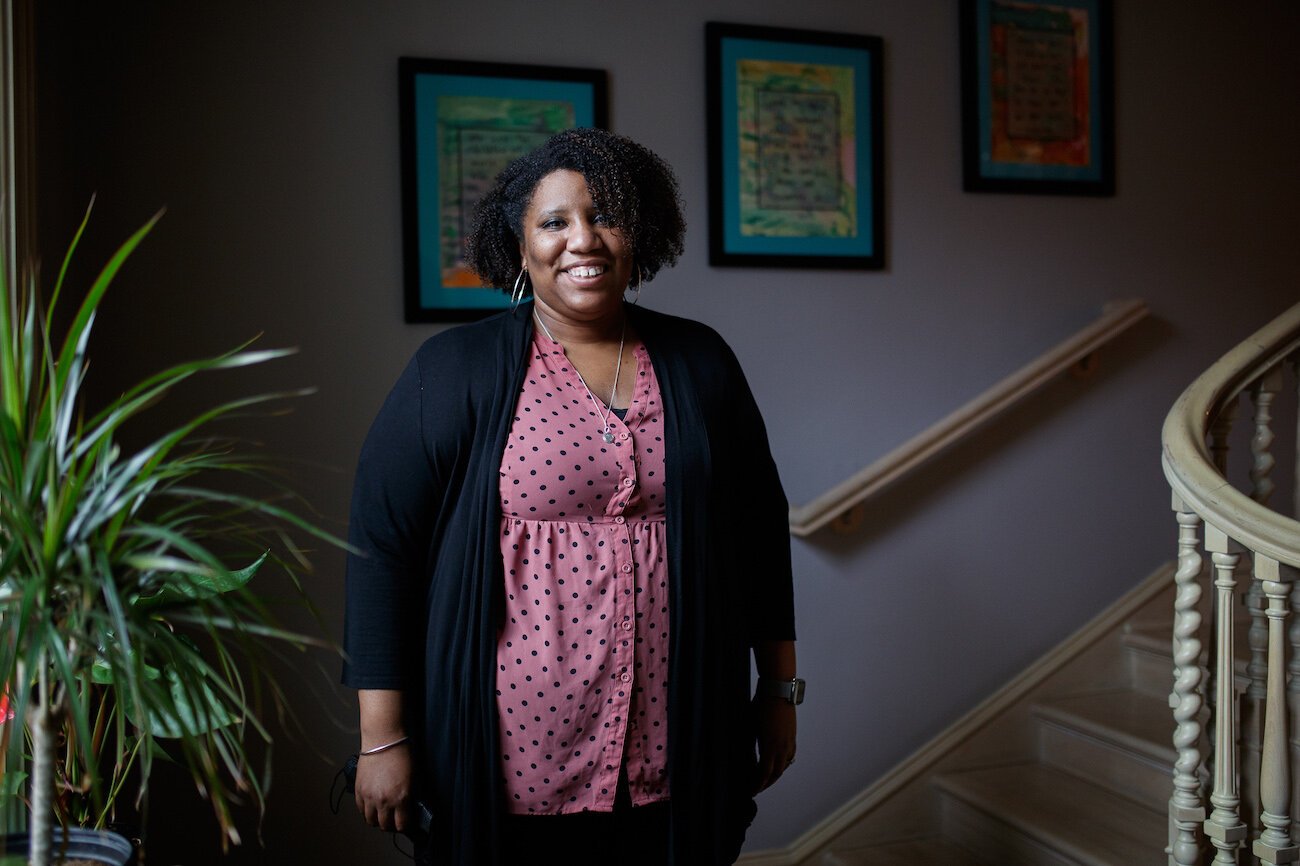 “It is about respecting the child or teen and where they are.” – Claudnyse D. Hollman, president and CEO of Voices for ChildrenThe Voices for Children team started working with Swanson when a protocol needed to be put into place when children were rescued out of human trafficking. “Every sting, if there are kids involved we’re always there to provide food, blankets, teddy bears, you name it. We are there to work with the kid. Instead of going to the police department, they come over here, where they call it, ‘The Big Blue House,’” she said.

When a child is found, the forensic interview and therapy are done at the center to protect the child from having to relive and repeatedly discuss the trauma to all the different individuals involved in the investigation. Hollman is passionate about how the children are treated and protected during the entire process.

“The forensic interview is a friendly way to talk about trauma,” she said. “Trauma is never easy, having to relive that trauma is not easy either. So a forensic interview really tries to elicit the information in the most victim-centered way possible. It is about respecting the child or teen and where they are.”

Hollman also notes that, because human trafficking isn’t always a visible problem, people don’t always pay attention to how rampant it is.

“You cannot turn a blind eye,” she said. “It is not okay to pretend like human trafficking is a television that you can mute, fast forward, pause, or turn off. That is not okay, because the reality is that these kids don’t get to turn it off.”

The YWCA in Flint also coordinates with local police agencies and Voices for Children for sexual assault exams, housing, and support for the victims of trafficking. At the YWCA, sexual assault nurse examiners (S.A.N.E) are on call 24/7 to provide help with the medical care and investigation of trafficked victims in Genese County.

Sylvia Weiss is the co-chair for the Genesee County Human Trafficking Task Force, a S.A.N.E for the YWCA in Flint, and is a pediratirc nurse at Hurley Medical Center. She is passionate about creating an aftercare facility for victims and expanding partnerships with other agencies such as Voices for Children, equine therapists, and medical care personnel.

“They need to be able to find their identity again and function in society.” – Sylvia Weiss, co-chair, Genesee County Human Trafficking Task ForceWeiss’ passion started when she saw intimate details of the lives of those directly affected by trafficking.

“The injustice, working as a SANE and seeing how it affects somebody long-term … To have that identity stripped away when they [victims] are sexually assaulted, it infuriates me that there are men (the biggest consumers tend to be Causcasion men) who are doing this,” Weiss said. “(People) are making millions of dollars off of using children for pleasure. I cannot stand that. I can’t handle injustice so I have to do something. I need to find them somewhere where they can go, they can heal, and they can get restoration. They need to be able to find their identity again and function in society.”

Weiss recently started the Prism Project, a nonprofit that will help facilitate the last missing piece to help sex trafficked victims. Her goal is to raise money to create an aftercare facility that will help reintegrate trafficked victims back into society and have lasting healing from their trauma. “It’s to shine the light on the darkness of sex trafficking so survivors can walk in the light of faith, hope, and love,” she said.

Ella, with the help and support from Hollman at Voices for Children, her church family, and Weiss, is still working to reintegrate back into a world where she and her daughter are truly free.

“It’s definitely been a very long journey for me,” she said. “I have started from zero several times but I don’t want my daughter to experience how it is to be homeless because I have been homeless before.”

Ella is now a peer recovery coach who helps other survivors find healing. She wants other victims to know, “You don’t have to go back to what you used to have or that lifestyle. Yes things will be hard for a while. I found my voice and I am not afraid. I know I am worthy of love even though I was told differently before. I am a good person.”

Another fight for local organizations who work with victims is battling stigmas associated with sex trafficking — namely, that it happens in distant communities or isn’t present in our day-to-day lives here.

“Know they’re [trafficking victims] not shackled, they’re walking all around us,” Weiss said. “They still go to school, they still go to work. They are controlled by manipulation, coercion, and threats. It can happen to anybody. They don’t get abducted, less than 3 percent get abducted. It’s hidden in plain sight. People are so busy and caught up in their own stuff that they just miss it.”

Both adults and children are victims of trafficking. The populations of victims are typically in the 12-15 year-old age range, although it varies. Particularly, young people with vulnerabilities are often targeted — those living in foster care, or runaways, or who have drug or alcohol addiction problems either themselves or in their family, or teens who are LGBTQIA+ and struggling to fit in. Typically, they’re approached by a person who offers to take them in or take care of them. Traffickers make offers to provide basic needs, like food or shelter, then begin asking for things in return. They’re manipulated into believing they’re being taken care of or given love and made to think they’re disposable. Many are given addictive drugs as another way to institute control.

Swanson recognizes the many vulnerabilities that are preyed upon.

“These are human beings that moms and dads held in their arms that either made a bad choice or didn’t have the same things or same advantages as other people,” Swanson said. “And they got caught in a situation where they cannot escape.”

Vigilance starts with recognizing the populations at greatest risk of becoming trafficked — those struggling with addiction, runaway homeless youth, people with unstable housing, and people struggling with mental health issues.

Warning signs that an individual may be being trafficked include signs of physical abuse (burns, bruises, cuts), unexplained absences from class, being overly tired in class, sexualized behaviour, being withdrawn, new tattoos (often a way to brand victims), and older intimate partners or new friends with different lifestyles.

Since the problem is often invisible on the surface, it requires close collaboration and vigilance among law enforcement, healthcare facilities, schools, counselors, nonprofit organizations and the community as a whole.

2020-11-18
Previous Post: Officials continue to work with homeless people living outside Manchester courthouse
Next Post: Help the Hungry: Shut Down All Food Banks!