iHeartRadio partners with Paula Fuga on campaign to end hunger, cuts 2 DJs who mocked her from morning crew 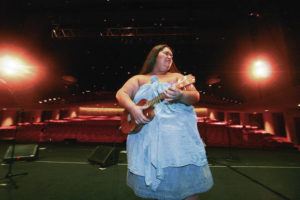 Management at iHeart—Radio removed two Island 98.5 radio deejays from the station’s morning drive-time show after they mocked singer Paula Fuga at an on-air fundraiser for the Hawaii Foodbank.

Chuck Cotton, president and general manager of iHeartMedia, issued a statement Monday saying “Slick Vic” Harris and “KreyZ” Oshiro “are no longer part of the Island 98.5 Wake Up Crew.” Cotton did not say whether Harris and Oshiro had been fired. He said he could not share “any further details on personnel matters for privacy reasons.”

Also Monday, Fuga and iHeartRadio Honolulu announced they will start a statewide campaign to end hunger.

Harris and Oshiro teased Fuga about eating out of a garbage can after she disclosed during the Tanks Fo’ Giving Foodbank fundraiser that she had done so as a hungry child while living homeless on the beach.

Cotton and other executives from iHeartRadio Honolulu met with Fuga and her team Monday. Following the meeting, they joined Fuga in issuing this joint statement that said in part, “Fuga’s courageous transparency at Tanks Fo’ Giving has afforded a renewed opportunity to better support the crisis of community hunger in the islands. … Moving forward together, iHeartRadio Honolulu has committed all of its resources to build a coordinated campaign that will support a statewide mission to end hunger in Hawaii. We look forward to sharing those details in the coming week.”

Cotton said in a separate statement, “The on-air comments made by DJs ‘Slick Vic’ Harris and ‘KreyZ’ Oshiro this past Friday were highly insensitive and do not represent the values of Island 98.5 (or iHeartRadio Honolulu) and our commitment to the communities we serve.”

Cotton added, “We want to sincerely apologize to Paula Fuga and to any others who were offended. Please know that the situation has been addressed internally.”

Cotton also thanked the Hawaii Foodbank and said he looked forward to “our continued partnership on this extremely important cause.”

Ron Mizutani, Hawaii Foodbank president and CEO, said in a statement, “Paula Fuga is the embodiment of quintessential nourishment, rising above the negativity with genuine aloha. We are incredibly grateful for her vulnerability, poise, courage and compassion.”

“Paula’s example inspires our mission. It reminds us that hunger knows no bounds,” he said. “Hunger, in and of itself, is already universally unforgiving; it does no good to perpetuate it further with insensitivity, discrimination or humiliation. At Hawaii Foodbank, we do not condone this type of behavior.”

Since the incident there’s been an outpouring of public support for Fuga from all walks of life, including other Hawaii entertainers like internationally famous musician Jack Johnson and Grammy award-winning recording artist Kalani Pe‘a.

By Monday evening a change.org petition, calling for “A wake-up call for the Wake Up Crew,” already had garnered more than 7,400 signatures. The petition, 808ne.ws/wakeup, asked that the Wake Up Crew and Island 98.5 “be held accountable and reprimanded to the fullest extent.”

Many in the community also have been moved to donate to the Hawaii Foodbank in Fuga’s name.

Fuga did not immediately respond to a request for comment from the Honolulu Star-Advertiser.

However, in a social media post Sunday, she said, “Kindness is what we need more of in our world and I hope this becomes a teachable moment. One that incites heartfelt generosity and genuine compassion for the families and especially the children of Hawai‘i, who are likely experiencing hunger now more than ever, due to the economic crisis brought by this pandemic.”

She expressed gratitude for the “overwhelming outpouring of support for me in what I felt was a vulnerable situation. I survived a lot worse than bullying throughout my life and wish no one any ill will.”

Fuga has performed at the White House three times, and she has teamed up with music legends Ziggy Marley and Jack Johnson.

She got her start as a songwriter in high school when she began studying under master ukulele instructor Roy Sakuma.

But her success did not come easy.

During the radio fundraiser, she shared, “When I was a little kid, I used to be homeless on the beach, so I benefited from things like this, from people giving. It’s something that I really don’t talk about. … I’ve eaten from a trash can when I was a little girl. I’ve been hungry before.”

Then Harris interjected, “Is it right out of the trash can, or do you put it on a plate first?”

Fuga laughed but then said, “No, like I could cry thinking about it. Like in the dark with my hand from a trash can.”

Later she asked the hosts, “Do you have a box of tissues?”

In response, Harris joked, “No, but we got a trash can right over there by the bar.”

A visibly upset Fuga said, “I don’t eat from a trash can anymore.”

A third 98.5 deejay, Rory Wild, thanked Fuga and said that “people donated because she sang.”

When it was Harris’ turn to close out the exchange, he said, “Looks like Paula wants to say something.”

Then she said, “Kids, even as an adult, there will still be jerks who make fun of you and your pain. I mean, what the hell is your problem? I’m so sad right now. I don’t want to sing.”

The visibly shaken Fuga was then escorted off the stage by Flash Hansen, 98.5 director of promotions and marketing.