Immigration, Gay Youth at Heart of GLAAD-Nominated ‘The Magic Fish’ 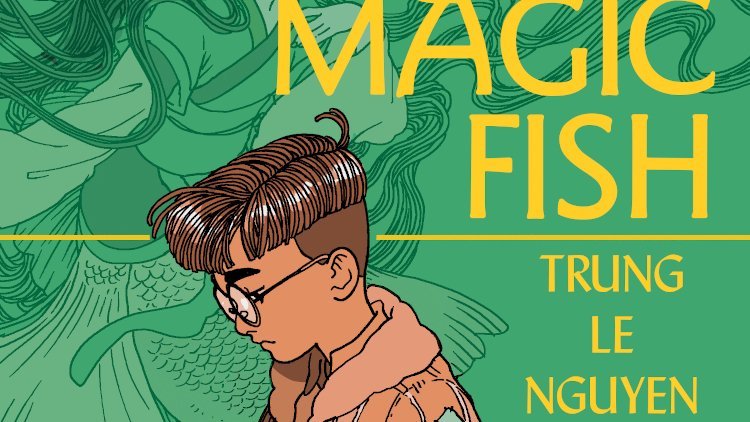 I unexpectedly cried as I read the wonderfully queer, GLAAD-nominated graphic novel The Magic Fish. My tears were the drops of sweet, unbridled joy and unencumbered hopefulness. As a middle-aged, lifelong comic book enthusiast I found my emotional response after finishing The Magic Fish to be a delightful surprise.

While The Magic Fish is aimed at a middle-school audience, its heartfelt honesty transcends age. It is a bold immigrant story focusing on Tien, a 13-year-old Vietnamese boy, and his parents as they navigate their new home in America. It is also an LGBTQ+ narrative about finding the words to vocalize your queerness to parents who lack the language to fully understand what being gay means. And it is a tale about the power of shared stories and how fairy tales are often used to express deep truths about society and culture.

But at it’s center, at it’s heart, The Magic Fish is a story about the critical task parents have in raising queer children. “I wanted to tell a story about parents who try really hard to make sure their kids are protected,” Magic Fish writer and artist Trung Le Nguyen tells The Advocate. (Story continues below photo of Nguyen.)

While interviewing Nguyen, who also goes by the name Trungles, and listening to him speak so earnestly and openingly about his graphic novel and the responsibility parents have in a queer child’s life, I was surprised to find myself welling up with tears again.

Protection is the word that stuck with me. A parent of a young queer child must absolutely protect them. Guard them. Guide them. Shield them from the uninformed and the bigoted. As Nguyen spoke of the the importance of parents supporting and loving their queer children, I was brought back to my own coming out and all the uncertainity that was entangled in my gay awakening.

For LGBTQ+  individuals of a certain age, like myself, the parental norm was to cast aside any child who identified as anything other than straight. Today, the rejection of a queer youth seems to have abated somewhat in our more accepting and understanding times, but the reality remains stark for many. According to True Colors United, nearly 40 percent of homeless youth identify as queer.

This is inexcusable. Any child forced to leave their home because of their identity is one too many. The rejection of LGBTQ+ children is a cultural travesty driven by fear, misinformation, and more often than not, misguided religious fever.

But Nguyen, who identifies as queer himself, felt creatively compelled to write a book that shied away from existing solely to educate. Nguyen sought to craft a story that would not be perceived soley as an “issue book” meant to preach to someone outside the queer community. Instead, The Magic Fish is a soul-baring graphic novel for queer children (and adults who love a great comic with beautiful art).

Nguyen created The Magic Fish to “give queer kids the expectation that your parents should be protecting you, and if they haven’t done that they have failed you.” For this reason, the story “is told at the eye level” of a child. A tale that doesn’t look down to young readers, but one that speaks to them as equals. Nguyen points out to me that the narrative is also used to dispel the notion that a queer-themed graphic novel geared towards young readers has to be about gay sex.

“The way being queer manifests in our daily ways is not just in a sexual way,” Nguyen says. “Queerness is not something within the realm of the bedroom, it’s something we walk around with every single day, every moment of our lives.”

The Magic Fish is out now.