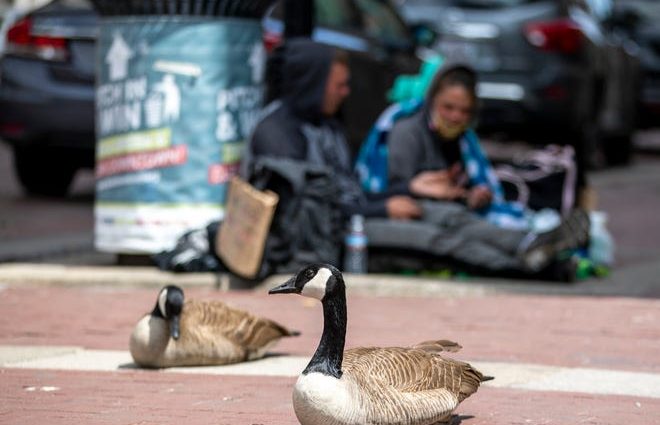 A new city-county council proposal requires donors to register with the city if they plan to distribute charitable goods on public streets in Indianapolis, a move that has drawn scrutiny from some public groups who see it as a deterrent from helping the city’s poorest and most vulnerable people.

The proposal, introduced by Republican councilor Michael-Paul Hart, would require any person or group planning to hand out goods to at least 10 people on public property to register with the Office of Public Health and Safety.

The no-cost registration would include the donor’s information, including address, email and telephone number, and information on when and where the distribution will occur. The proposal requires donors to giveat least 48 hours of advance notice.

The proposal follows a particularly tough year for the downtown area, which experienced destruction from rioters in May compounded by a lack of people in the area due to the coronavirus pandemic and an increasing number of employees working from home.

Over the summer, business owners reported seeing more people experiencing homelessness in the area. They also lamented an increase in trash on streets — particularly from groups that come into Mile Square to hand out food but not monitoring the clean-up of such food donations.

Related: How downtown suffered from the coronavirus pandemic.

Hart, a small business owner, said the proposal stemmed from talking with downtown businesses and organizations. The change, however, would apply to all city streets.

“It’s not doing anything to prevent individuals from going out and doing good,” he said. “The idea is just to enhance the distribution process and have something that’s more streamlined instead of what we have today.”

But some residents plan to protest the proposal at the public safety and criminal justice committee meeting on Wednesday, calling it a war on the city’s poor.

Some groups, such as Food Not Bombs-Indianapolis, distribute food for those in need in public spaces.

The donor network is large, Hart said, and there is a need to have a comprehensive way to structure distributions. He also noted concerns over the safety, health and accountability of distributions — including the safety of the recipient and any litter from handing out goods.

Hart has offered amendments to proposal, which have not yet been uploaded online but will be heard at next week’s public safety and criminal justice committee meeting.

That includes the elimination of a proposed $500 fine for those who violate the order — under the new amendments, donors would first get a verbal warning. Any subsequent violation could carry a civil penalty.

He noted that the proposal does not restrict individuals who want to hand out items to one or two people, but is geared toward planned distributions to bigger crowds.

The amended proposal also requires the Office of Public Health and Safety to share donor information with the Marion County Public Health Department for any necessary food safety enforcement.

The Coalition for Homelessness Intervention and Prevention provided feedback on the proposal and assisted in connecting Hart with service providers and community partners, the agency said in a statement.

“But at this time, we feel like there are more conversations to be had before moving forward, and would recommend an education-first approach within the community, so that people who want to help individuals experiencing homelessness with donations understand the proper channels to follow,” executive director Chelsea Haring-Cozzi said in a statement regarding the original proposal. “It will take a truly collaborative effort from the community at large, our partners and service providers, and city leaders to address and end homelessness within Marion County – and that remains our number one goal.”

Horizon House, which works closely with the homeless population to connect people to basic needs and housing, did not comment directly on the proposal but supportedthose showing support to people experiencing homelessness.

“We encourage groups to collaborate with professional service providers, avoid creating crowds that could spread COVID-19, and ensuring proper disposal of any waste created,” executive director Teresa Wessel said in a statement.

A proposal in 2018 that would have prohibited people from sitting on city streets and sidewalks from 6 a.m. to midnight in the Mile Square also faced significant backlash. That proposal, also submitted by a Republican, did not make it out of the rules and public policy committee of the majority-Democratic council.

But Hart said he does believe the proposal, with its amendments, will make it out of Wednesday’s committee meeting. He said most of the amendments came from the other side of the aisle.